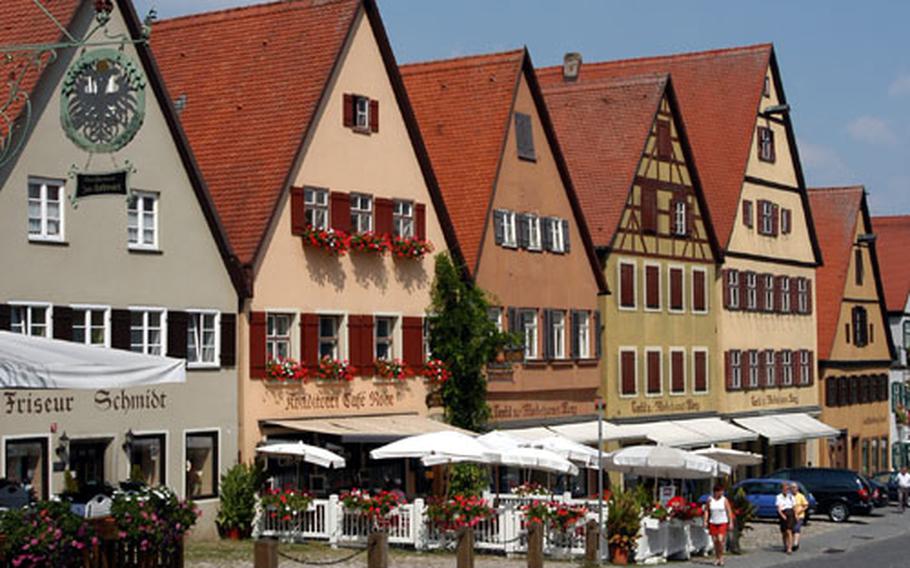 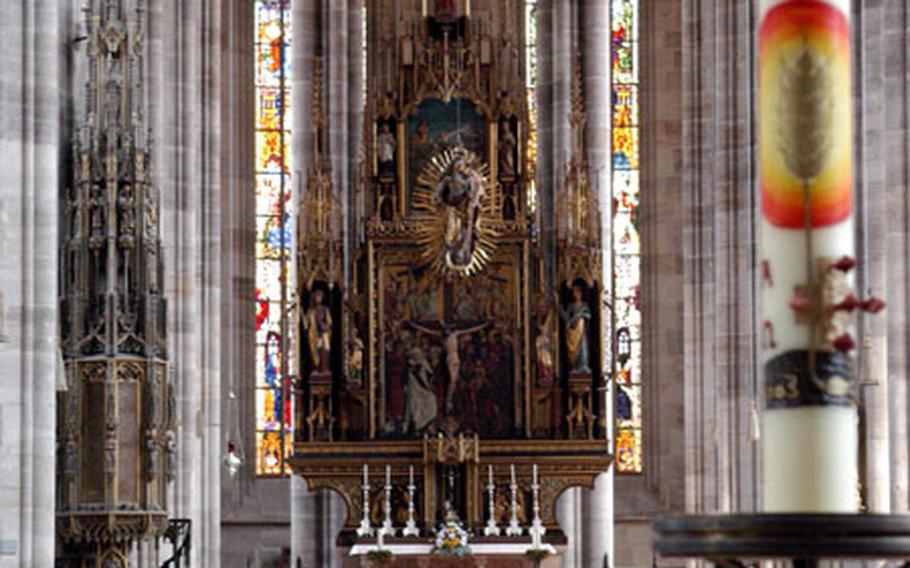 Inside the 12th-century church of St. George, in Dinkelsbühl, Germany. (Michael Abrams / S&S) 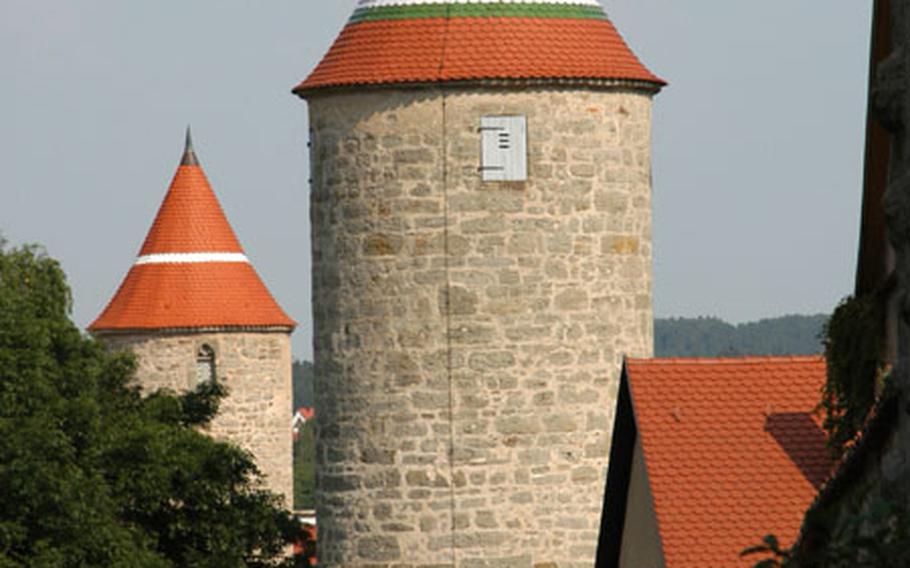 Two of Dinkelsbühl, Germany&#39;s 18 medieval towers, the Krugsturm and the Hertelsturm. Like Rothenburg, also on Germany&#39;s Romantic Road, Dinkelsbühl is surrounded by medieval fortifications. Unlike in Rothenburg however, you can&#39;t walk along the walls. (Michael Abrams / S&S) 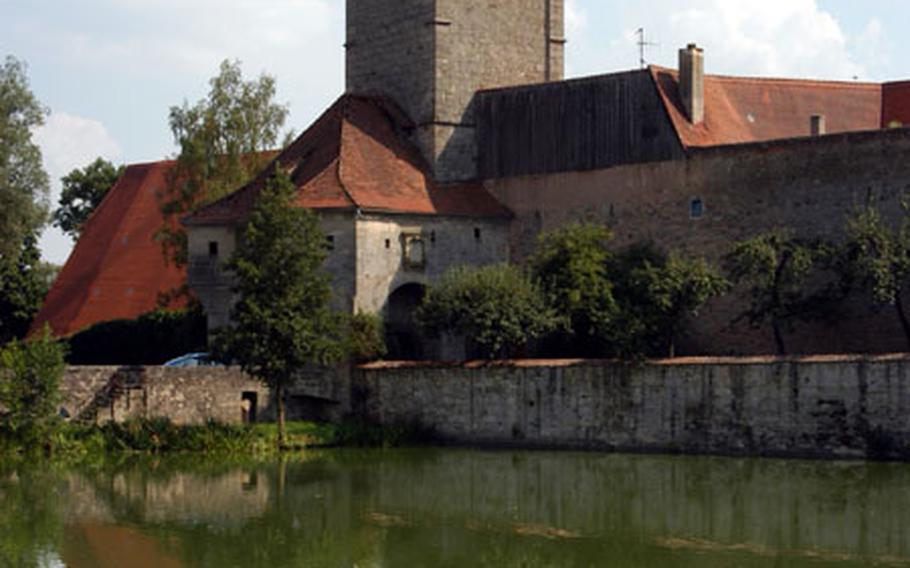 Dinkelsbühl, Germany&#39;s Rothenburger Tor, a gate of the city dating back to 1390. It once housed a torture chamber and a jail. (Michael Abrams / S&S) 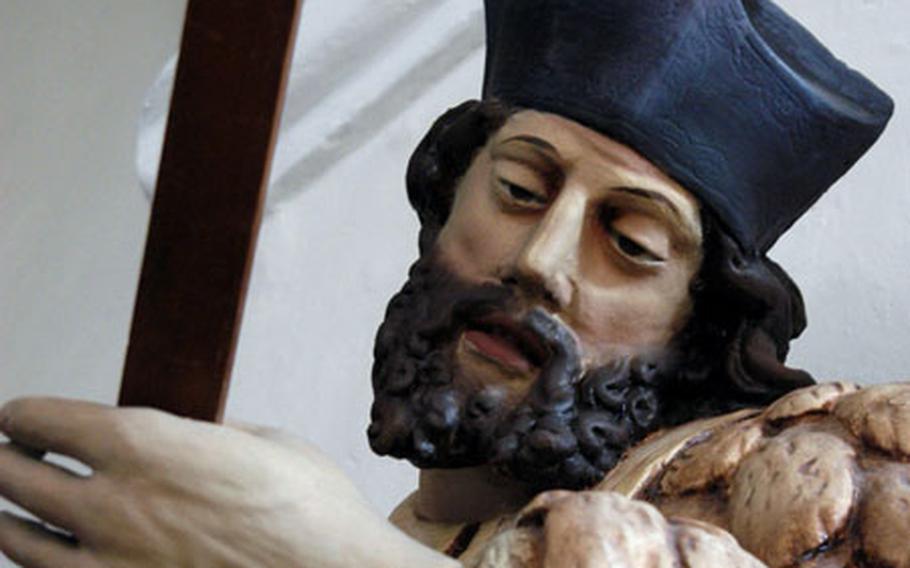 On a stretch of picturesque German highway called the Romantic Road, stands an age-old town surrounded by a medieval wall and guarded by 18 towers. Colorful houses line its cobblestone lanes, and in the evenings a night watchman makes his rounds. During the Thirty Years War, the act of a courageous citizen kept the town from being destroyed by the Swedes and is still remembered here today.

The town has many similarities to Rothenburg ob der Tauber, but unlike its famous cousin to the north, Dinkelsb&uuml;hl is not as infested with tourists. Not to say they don&rsquo;t come, but not in flocks as they do to Rothenburg.

Why? One reason might be because visitors can&rsquo;t walk on the city walls here. They can walk all the way around them on the inside or on the outside, but not on top of them. Otherwise, Dinkelsb&uuml;hl has no problem measuring up to the town on the Tauber.

Every July, the citizens celebrate Kinderzeche (Children&rsquo;s Feast), the saving of the town from destruction by the Swedish army. According to legend, in 1632, a girl named Lore, along with the children of the town, begged the Swedish commander, Col. Klaus Dietrich von Sperreuth, to spare the city, thus saving it from destruction. A festival play celebrating the event has been performed here since 1897.

Sight-seeing is an easy walk around Dinkelsb&uuml;hl, even if you stroll all the way around the entire town along the wall.

Worth noting are the city&rsquo;s four gates, the Rothenburger Tor, the Segringer Tor, the N&ouml;rdlinger Tor, and the oldest, the W&ouml;rnitzer Tor. And while the wall and its towers are impressive, don&rsquo;t miss the town inside them.

Check out the 15th-century St. Georg church with its even older tower. Inside, look for the Altar of St. Sebastian with its eerie decorated remains of St. Aurelius, who was martyred in Rome under Nero.

Further up the street is the Spital of the Holy Ghost, once a hospital. In medieval times it was outside of the wall, to keep plague sufferers out of the city. Today it is a museum, and in winter, a Christmas market is held in its courtyard.

On the other side of town there are two massive half-timbered granaries. One of them is still used as the town&rsquo;s youth hostel. Also worth seeing are the Capuchin monastery and the Dreik&ouml;nigskapelle (Three Kings Chapel).

And after wandering through Dinkelsb&uuml;hl, and enjoying its medieval charm, stop at one of the many restaurants serving hearty German fare and a well-brewed beer.

&bull; Where: Dinkelsb&uuml;hl is in southern Germany, on the picturesque highway known as the Romantische Strasse, which runs from W&uuml;rzburg in the north to F&uuml;ssen in the south. It is a short drive off of Autobahn 7, exiting at the Dinkelsb&uuml;hl/Fichtenau exit and following the signs to town.

&bull; When: Dinkelsb&uuml;hl can be visited year-round. In warmer weather it is more enjoyable to walk around the town walls and sit outside in caf&eacute;s and restaurants, but winter&rsquo;s snow adds a romantic touch to the city.

If you want to visit Dinkelsb&uuml;hl when something is happening, here are a few suggestions:

On Sept. 7 is the medieval town festival &ldquo;Leben in einer alten Stadt&rdquo; (Life in a historic town) with a historic market and skilled handicrafts that have been passed down through the generations. Entertainment is provided by the Swedish pipers and flag swingers and the Dinkelsb&uuml;hl Boys Band.

Fish Harvest Week is from Oct. 25 through Nov. 2, when everything has to do with fish. Fish have been raised in the lakes and rivers around the town for centuries, and a colorful program of fish-related events is held and the restaurants serve up gourmet fish dishes.

Dinkelsb&uuml;hl holds its annual Christmas market from Nov. 28 to Dec. 21 in the Spitalhof.

Next year, the Kinderzeche, the re-enactment of the legend of how the girl Lore saved the city from destruction in 1632 by pleading for mercy to a Swedish commander, takes place from July 16 through July 25. For more information, go to www.kinderzeche.de .

&bull; Information: Dinkelsb&uuml;hl's Tourist Information Office is on the marketplace across from St. Georg church. It is open everyday except Sundays and holidays from November to April. Phone: (+49) (0) 9851 90270.

Check out the city's Web site at www.dinkelsbuel.de for more information on the town and its sights, tours and events. Beware, though, that the calendar of events on the English language page shows last year&rsquo;s dates.