The Forest of Sculptures is a gift from the late collector Simon Spierer. Forty sculptures by such artists such as Henry Moore, Alberto Giacometti and Max Ernst are spread out over three rooms. (Michael Abrams / S&S)

The Forest of Sculptures is a gift from the late collector Simon Spierer. Forty sculptures by such artists such as Henry Moore, Alberto Giacometti and Max Ernst are spread out over three rooms. (Michael Abrams / S&S) The 2,500-year-old stone statue of a Celtic prince. Complete except for his feet, the statue was discovered near the village of Glauberg and is a major archaeological find. It is on display until the museum&#39;s closing in September. (Michael Abrams / S&S) 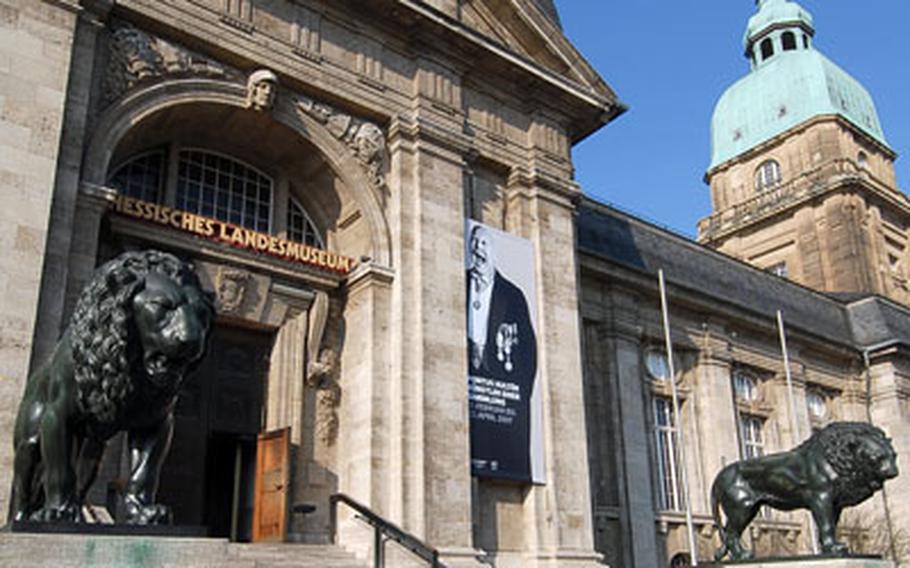 The Hessisches Landesmuseum, with its lion statues flanking the entrance stairs, will close at the end of September. The 100-year-old building needs extensive renovations and its modern art wing, built in 1984, will be torn down and replaced with a larger building. The work is scheduled to last until 2011, with the museum closed for most of that time. (Michael Abrams / S&S)

The last time we took a Quick Trip to the Hesse State Museum in Darmstadt, Germany, it was for its fine collection of art and natural history.

This time, it's about openings and a closing.

In the past two years, three exhibits opened at the museum and another is on the way. But the museum itself is closing at the end of September.

Not for good, but for many Americans stationed in the area, it might as well be. The 100-year-old building needs extensive renovations and the modern art wing, built in 1984, will be torn down and replaced with a larger building. All this work is scheduled to last until 2011, with the museum closed for most of that time.

The good news is, until then, you can still see much of what the Hessisches Landesmuseum, as it is called in German, has to offer.

One of the museum's newer exhibits is a 2,500-year-old stone statue of a Celtic prince. Complete except for his feet, the discovery - found near the village of Glauberg, between B&uuml;dingen and Giessen - was a major archaeological find. Along with the prince in full regalia, shards of other statues, jewelry and a bronze pitcher were unearthed.

Who would get to keep the prize? A long political battle between the state museum, a museum in Bad Nauheim and Glauberg ensued, and when the dust settled Glauberg got the nod for a new museum dedicated to the find. So when the Darmstadt museum reopens, the Celtic prince will no longer be one of its highlights.

The Forest of Sculptures, an exhibit that opened in 2005, will still be around at the reopening. The name for the large exhibit, a gift from the late collector Simon Spierer, is fitting. Spread out over three rooms are 40 sculptures by such artists as Henry Moore, Alberto Giacometti and Max Ernst.

The collection pretty well traces 20th-century sculpture from late art deco to postmodernism. While many of the works have human form, such as Moore's "Three Quarter Figure," others like Lucio Fontana's "Torso of a Horse" and Graham Williams' "Folded Steel Leaves" follow other lines.

The newest collection in the museum consists of 11 works by German artist Blinky Palermo (1943-1977), who was a student of Joseph Beuys. Beuys, a controversial German artist who used such things as felt, lard and garbage in his works, also has an exhibit in the museum. The works by Palermo, whose paintings have also been shown at the Serpentine and Tate in London, were done between 1961 and 1970.

If you are a fan of modern art, visit the museum before April 22 to see a temporary exhibit of the collection of Pontus Hult&eacute;n. On display are works by, among others, Niki de Saint Phalle, Claes Oldenburg, Jean Tinguely, Robert Rausenberg and Andy Warhol. The late Swede was not only a collector, but friends with many of the artists represented here.

On March 29, a temporary exhibit, "Messel on Tour," is to open and run until the museum closes in September. It is an exhibit of the museum's collection of fossils from the nearby Messel Pit Fossil Site. On the World Heritage List, it is one of the richest sites for fossils from the Eocene period, when mammals became the dominant animal.

The exhibit's name comes from the fact that while the museum is closed, the collection will travel to natural history museums around the world. Keeping its exhibits on display while it is closed is the direction the museum is taking. Its collection of religious- panel paintings is on loan to the St&auml;del museum in Frankfurt at present.

On the QTDirections:The Landesmuseum is in downtown Darmstadt, north of the Schloss (palace), just outside of the pedestrian zone at Friedensplatz 1.

Costs:Admission is 2.50 euros for adults; 1 euro for children; 5 euros for a family ticket (two adults with children). Admission for the permanent exhibit is free daily after 4 p.m. A ticket for that and the Celtic prince is 4 euros, 2 euros and 10 euros, respectively. A combination ticket for all the exhibits is 6 euros for adults, 3 for children and 12 for families.

Food:There is a cafe in the foyer that offers drinks, cakes and snacks. You don't have to pay the admission charge to enter the cafe.

Information:The museum's German- language Web site is www.hlmd.de. Read an earlier Quick Trip article about the museum is on Stripes.com.