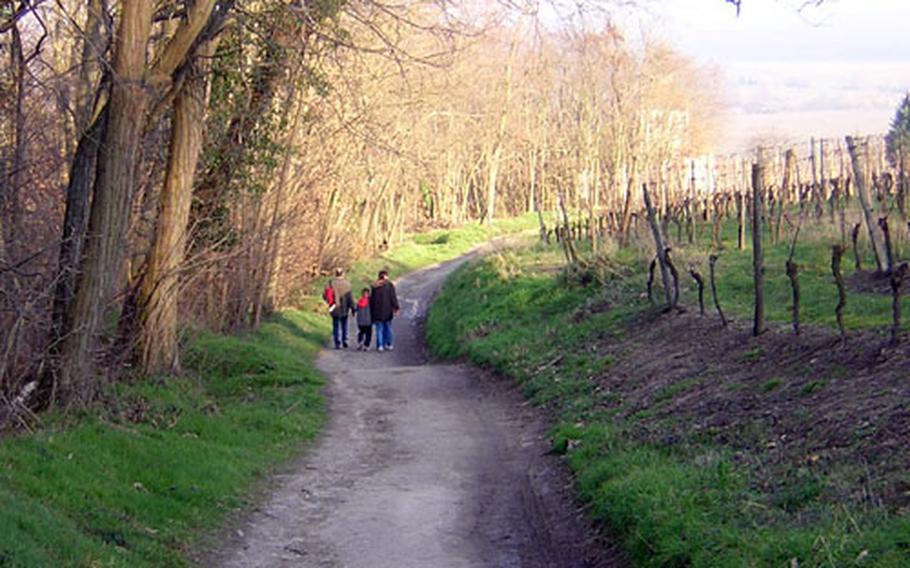 A family heads down the homestretch of a trail leading back to Chappelle St.-Sébastien. Woods are to their left, vineyards to the right, and the town of Dambach-la-Ville is straight ahead. (John Taylor / S&S)

A family heads down the homestretch of a trail leading back to Chappelle St.-Sébastien. Woods are to their left, vineyards to the right, and the town of Dambach-la-Ville is straight ahead. (John Taylor / S&S) 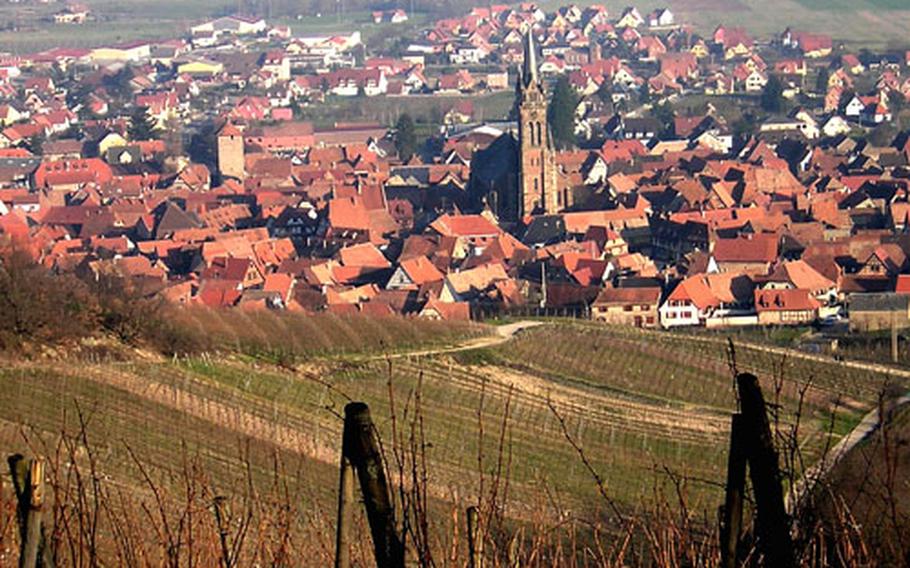 The town of Dambach-la-Ville sits on a hillside, surrounded by vineyards. The steeple in the middle belongs to a 19th-century church, and one of the remaining medieval gate towers is at left. (John Taylor / S&S) 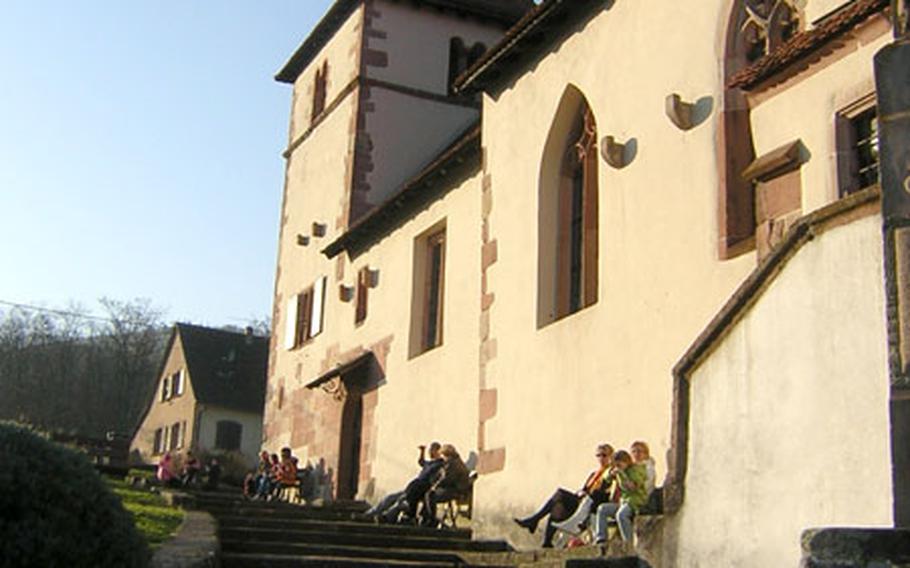 Chappelle St.-Sébastien, the starting and ending points for several trails through the hills and woods above Dambach-la-Ville in France. The chapel dates from the 13th century, although much of it, including the carved altarpiece inside and an ossuary that can be viewed from the outside, are newer. (John Taylor / S&S) 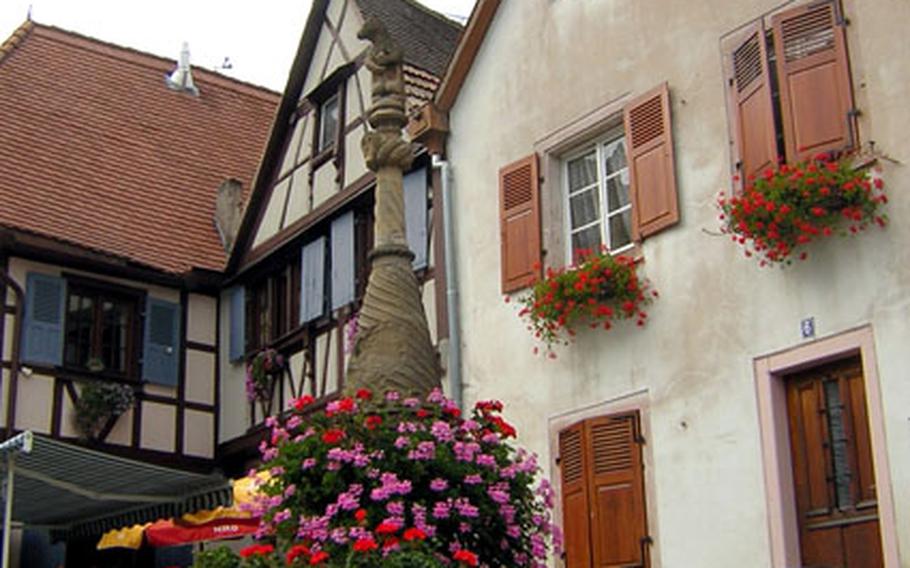 Dambach in the fall: Flowers spill out of window boxes and from around a fountain topped by a bear in the old town center. (John Taylor / S&S)

It is easy to skip Dambach-la-Ville, France, on your way to visit its better- known Alsatian neighbors.

But that would be a mistake. You would miss an excellent chance to get a close-up look at the region&rsquo;s vineyards, hills and woods linked by a network of hiking trails just outside the town.

We had stopped there last fall on the advice of our guidebook. It recommended a visit to a small chapel just above Dambach for nice views of the town&rsquo;s rooftops and the fertile fields stretching toward the Rhine River.

While there, we noticed it was the starting point for several marked trails, some of them not long and supposedly not difficult.

During a glorious weekend last month, we returned to the chapel. Although we are not hikers, we decided to take one of the walks outlined on a large sign near the chapel. It went through still-bare vineyards, over a stream, through the woods and ended up where we began. It was supposed to take between 60 minutes and 2&frac12; hours.

The start of the trail is a steady, though not steep, incline. After about 20 minutes it begins to level off, and we decided it was not so bad, especially compared with some of the other marked trails that crossed it as they went straight up and down the hillside. The trail was wide, well-marked and for the first part followed a pleasant stream. I suggested we return here once a month through the summer and see if it got easier each time.

After about two hours on the trail, however, we became concerned. It was still going up. If we were going to make it back by the maximum of 2&frac12; hours, we were either facing a sharp drop or the realization that I had misread the sign. I walked ahead quickly and found no change in the direction of the trail, so we decided to take one of the cross paths down.

We had seen people on it earlier, and although they were laboring, they weren&rsquo;t dying.

The downward trail was challenging, but not impossible. In about 30 minutes we were back at the chapel, having passed people with dogs walking up the hill, and being passed by people with kids walking down. Several people were sitting on the benches around the chapel, resting contentedly and soaking in the sun.

The small church, Chappelle St.-S&eacute;bastien, has an interesting history.

According to a sign nearby, it was once the church for the vanished village of Oberkirche, a fairly large hillside settlement. In the 13th century, the inhabitants left and moved into the fortified town of Dambach. The town gradually disappeared, except for the chapel, which became a place of pilgrimage, especially during plagues.

In 1796, 32 local families purchased the building from the state. They and their descendants assumed responsibility for maintaining the chapel and the 17th-century wooden altarpiece inside.

Dambach is an attractive town. It was once a walled city, and three of its stone gates still stand. Its small center has some well-preserved buildings, including a town hall, and several wine cellars selling products from the surrounding vineyards.

Best of all, during the summer, it is not as crowded as many of the other small towns on the Route des Vins between Strasbourg and Colmar.

On the QT ...Directions: From Germany, exit Autobahn 5 at Strasbourg Sud, follow L98 across the Rhine River to the intersection with N83 in France and head south. Just past the intersection of N83 and Autoroute A-35, watch for the exit for Dambach-la-Ville and follow D210 into town and through the old town gate. Signs for the ruins of Bernstein castle will lead you to Chappelle St.-S&eacute;bastien.

Times: The town and trails can be visited any time of the year, although both are better in good weather. Footpaths through the vineyards are closed one month prior to, and during, fall harvest.

Costs: There is no fee to use the trails or the small parking area at the chapel.

Food: There is a variety of restaurants in Dambach, and if you are in France be sure to eat. The local Riesling and Gewurztraminer wines, according to several Web sites, are among the best in Alsace.

Information: For more on the town, see http://www.alsaceroutedesvins.net/NewVersion/index.cfm and click on the English version, then &ldquo;Localities&rdquo; on the left column and then Dambach. There are links to the town&rsquo;s history, monuments, wine and walking paths.