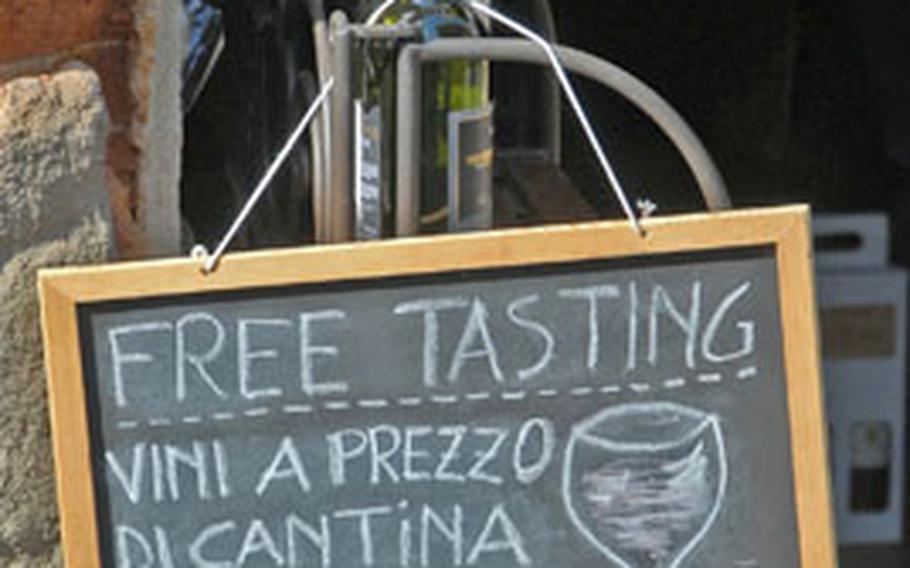 Signs like these are a familiar sight when traveling through the towns and vineyards of Tuscany. (Michael Abrams / S&S)

One of the great experiences of living overseas is the opportunity to sample a foreign culture.

And few aspects of European culture are more fun to sample than those involving wine.

When the Romans marched across the European continent some 2,000 years ago, they established military outposts, permanent settlements and reliable roads. They also planted vineyards, beginning an industry that became a part of the civilizations that followed.

Wine became a source of sustenance in places where the water was not safe to drink, and a valuable trading commodity that helped European economies grow. And when the vineyards&#8217; grapes were harvested and the new wine uncorked, a reason to celebrate.

That&#8217;s what this annual issue is all about. You can read how the ros&#233; wines of Provence and the red and white wines of Tuscany are a reflection of the conditions that produced them.

And you can read about the reign of a wine queen representing a German guild that is the last of its kind to continue an old tradition.

When you&#8217;ve read all you want about European wine and decide you want to sample some for yourself, turn to the list of wine festivals. The list includes events going on in a half-dozen countries, beginning now and continuing through the end of the year. Take a look and you should find something at a time and place to fit your schedule.

The list is compiled from several sources and is as up-to-date and accurate as possible. If, however, you spot any errors, please notify us by e-mailing travel@estripes.osd.mil so the corrected information can be included in later lists.