Crete: Fellowship of the ring 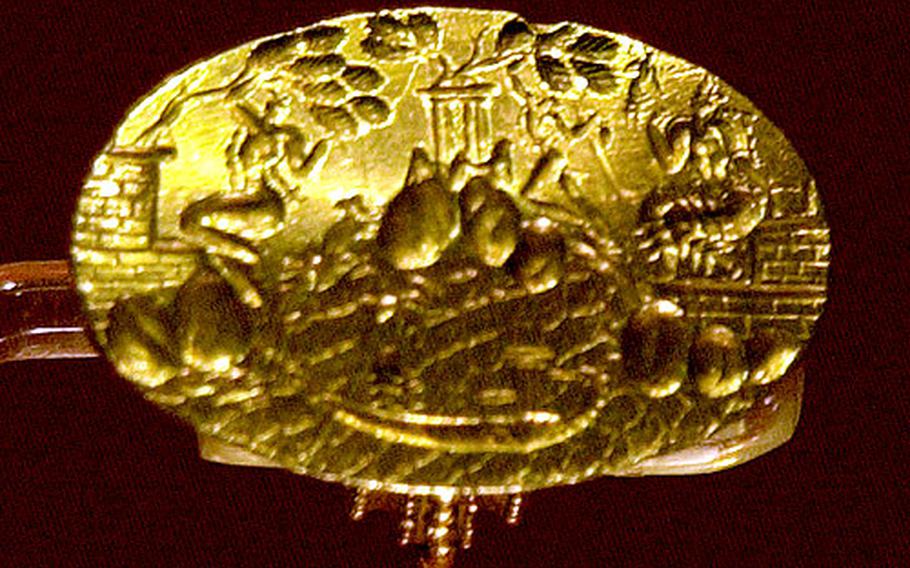 The newly-rediscovered Ring of Minos is the pride of the Iraklion Archaeological Museum. (Michael Abrams / S&S)

How convenient for Crete: Just as &ldquo;The Lord of the Rings&rdquo; films are raking it in, the island comes up with the real thing.

Ages before Tolkien&rsquo;s epic scribblings, Greeks sat around and jawed over the myth of King Minos. This lord of Crete, the story goes, cast a golden ring into the sea to see whether Theseus, who claimed to be the son of Poseidon, could dive in and bring it back.

Apparently it took him awhile: The buzz at the Iraklion Archeology Museum last year was the discovery of a ring popularly believed to have been that of a Minoan ruler, maybe even Minos himself.

Though it was only rediscovered this summer, the museum&rsquo;s assistant curator of antiquities remembers her father telling fables of the ring&rsquo;s existence.

&ldquo;The story of the ring was known in Heraklion,&rdquo; Nota Dimopoulou said. &ldquo;It was a famous ring, and it was lost. When it was found again, it caused great excitement.&rdquo;

Old people kept asking her, &ldquo;Is it true? Is it the ring?&rdquo;

The reason people still speculated over the whereabouts of the artifact is that it actually turned up once. In 1928, a small boy found a gold ring near the Knossos archeological site. The boy&rsquo;s family turned over the ring to the village priest, who tried to sell it to Sir Arthur Evans, the archaeologist behind the Palace of Minos reconstruction. Evans and the priest couldn&rsquo;t strike a deal, but the Brit would make amber and gold copies of the ring. He also began digging in the area where the trinket turned up and uncovered a raided tomb.

Researchers had a tough time finding out more about the ring after that. The priest told people he had lost it.

That seemed the end. The story faded into a hushed yarn of the elderly. Then last summer, the recovered ring was unveiled at the archaeological museum in Iraklion. And it was all thanks to a retired cop living in Athens.

The policeman had arrived on Crete to inspect the home of his deceased grandfather, the cantankerous priest. The policeman&rsquo;s aunt had just died, and that meant the family house was now his.

He noticed something strange about the fireplace. A chunk of concrete occupied a space where a brick ought to have been.

When the policeman dislodged the slab, he saw a fiery glint. The ring!

&ldquo;It was rather a surprise,&rdquo; Dimopoulou said, &ldquo;when the grandson of the priest turned up to the Ministry of Culture in Athens and said, &lsquo;Minister, I have a ring for you. An ancient ring. And I want it to go to the Iraklion Museum.&rsquo; &rdquo;

The policeman donated the ring at no cost.

Archaeologists inspected it and concluded it was genuine Minoan.

&ldquo;It was proved that this is the original,&rdquo; Dimopoulou said. &ldquo;There is no sign that any detail is not authentic.&rdquo;

The ring is too small to be worn on most fingers; the curator can only fit it on her pinky. And most lesser rings discovered around Knossos can&rsquo;t be worn at all. She believes they were perhaps worn on chains.

&ldquo;They were not just jewels. We call them rings, but they weren&rsquo;t made to be worn on the hand like modern rings,&rdquo; she said.

The Minos ring is decorated with a scene showing a goddess descending to the Earth, and also occupying a boat. Experts believe the symbolism is supposed to represent the relationship between firmament, earth and sea.

These days the ring is on display inside a crimson chamber at the museum, flanked by a roomful of smaller golden rings unearthed on Crete.

The effect of all this does suggest a certain One Ring to Rule Them All.

When trying to explain why the Minoan ring was kept under wraps for so long, a museum guard put it this way: People believed such a ring would give them much power. You don&rsquo;t just up and give that away.