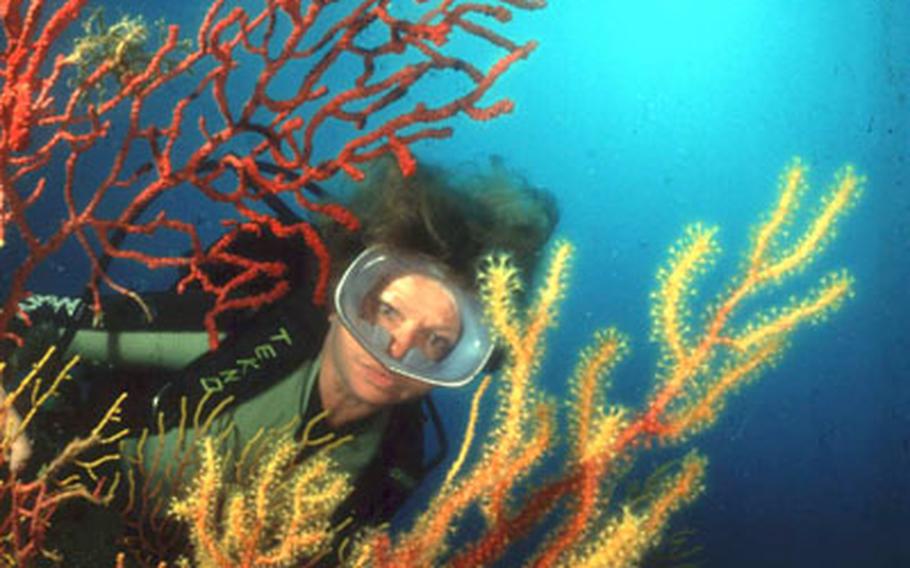 A diver peeks out from among sea life. The water around the small cluster of islands known as the Islas Medas, off Spain’s Costa Brava, are popular with divers and other visitors looking for solitude. (Courtesy of Lâ™Estartit Tourist Office)

A diver peeks out from among sea life. The water around the small cluster of islands known as the Islas Medas, off Spain’s Costa Brava, are popular with divers and other visitors looking for solitude. (Courtesy of Lâ™Estartit Tourist Office) 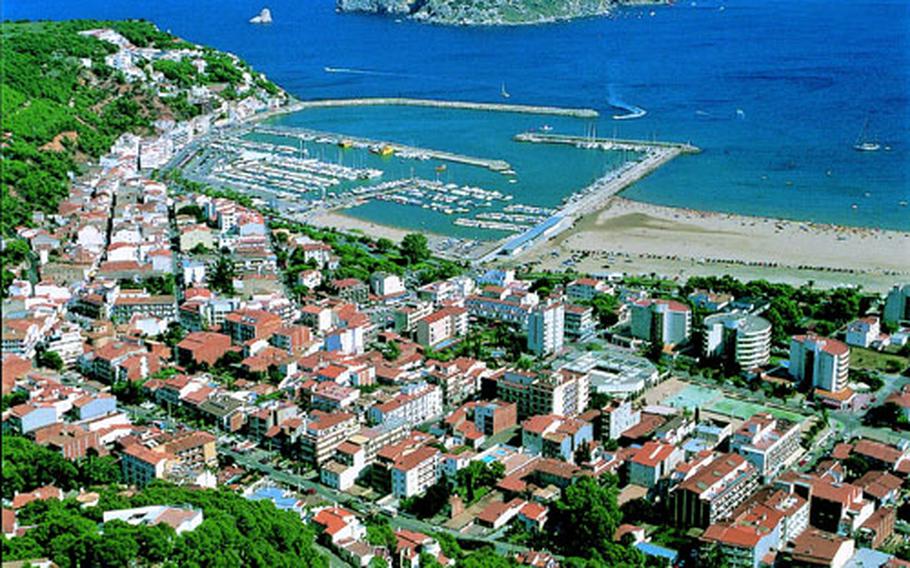 L’Estarit, a lively Costa Brava resort town, is nearly within swimming distance of the Islas Medas, but the islets feel as if they’re a world away from the hustle and bustle. (Courtesy of Lâ™Estartit Tourist Office)

Islas Medas, a tiny archipelago sitting a mile off Spain&rsquo;s Costa Brava, has no luxury hotels, no flashy bars and no sandy beaches.

A lone lighthouse advertises the presence of the archipelago&rsquo;s seven islets, some of them bumps barely big enough on which to spread your towel. At first glance, this is not what idyllic island holidays are made of. But stick around and you&rsquo;ll discover that what the Islas Medas lack in size and neon lights, they make up for in natural beauty.

L&rsquo;Estarit, a lively Costa Brava resort, is nearly within swimming distance of the seven islets, but the Islas Medas feel like they&rsquo;re a world away from the bustle of the coastal town. While the hum of splashing children and ice cream vendors dominate in L&rsquo;Estartit, quiet descends on the islands, where the only noises you hear are the waves of the Mediterranean, the calls of the seagulls and the occasional purr of a motorboat.

Of course, if the quiet gets to be too much, it&rsquo;s only a five- minute boat ride back to the beach buzz.

The Islas Medas are known mainly as a diving destination. As the natural habitat of some 1,350 classifications of marine life, the waters rank as one of the top scuba diving spots in the Mediterranean and are the unparalleled diving paradise of the Costa Brava. The area is so important that it has been declared a marine reserve and is strictly protected, with limits on the number of divers who can visit the site and a complete ban on fishing.

Geographically the islets form part of the Montgr&iacute; massif, a rough-looking rock formation that&rsquo;s part of reason this stretch of coastline was dubbed the Costa Brava, or &ldquo;Rugged Coast.&rdquo; Over time, erosion carved out the irregular forms that became the Islas Medas. The islets are scattered around the mouth of the River Ter, the source of a constant stream of food that nourishes lush marine plants and attracts dozens of marine species including octopus, bream, lobster and starfish. Occasionally dolphins, whale sharks or bigger fish, such as blue marlins, also appear.

&ldquo;The Illes are beautiful,&rdquo; said Peter Lane, owner of Calypso Diving and a diver who&rsquo;s been exploring these waters for 34 years. &ldquo;There&rsquo;s a massive fish population not found anywhere else on the Costa Brava. If you come, you&rsquo;ll see immediately why this area is so well thought of among divers.&rdquo;

Inma Ros, scuba diver and director of Estaci&oacute;n Nautic, a public office specializing in local coastal tourism, said the Illes are considered one of the best diving areas in the whole of the Mediterranean.

&ldquo;You&rsquo;re guaranteed to see a huge variety of fish in addition to coral, plants &hellip; the species living here are infinite,&rdquo; she said.

So many species make this their home in part because of the variety of land formations. Crustaceans nestle along the rocky coasts, while starfish lie on the shallow sandy bottom near the beach. Farther out, coral reefs provide excellent haunts for colorful fish. Underwater tunnels and caves are the hiding places for larger fish.

So much variety means that there are dives for all styles. Beginners diving no more than 35 feet deep will be able to spot lobsters and octopuses, while more experienced divers can head out to the rich coral landscapes that thrive in deeper, cooler waters.

Expert divers can explore the caves dug by time out of the rock massif. Caves like La Vaca &mdash; &ldquo;The Cow&rdquo; &mdash; feature a series of tunnels that house marine plants and fish. The mouth of La Vaca is well lit and ideal for photography, while its inner reaches are a mysteriously dark hole that guarantees a thrill.

There is even a wrecked ship nearby, which divers love to explore. The Reggio Messina, intentionally sunk in 1991, is a short boat ride from the islands and is the largest ship available for diving on the coast.

Diving is the Islas Medas&rsquo; claim to fame, but non-divers don&rsquo;t have to miss out on the fun. Glass-bottom boats make tours of the area, offering a peek at the abundant life under the water. On the islands&rsquo; dry land, unique birds including the cattle egret, the night heron and yellow- legged gulls have made their home, making this area popular with bird-watchers.

Those wanting to test the diving waters can do &ldquo;try dives,&rdquo; short, shallow-water dives that are supervised by an instructor and intended to give a feel for scuba diving. In most other diving resorts, try dives are done in sandy waters filled with swimmers or in chlorine pools, but in this area they&rsquo;re done in the Mediterranean, meaning that even a simple try dive affords exciting views of marine species. Those unwilling to don a wetsuit have the option of simply snorkeling around the shore, while those wanting to learn more can sign up for certification classes.

These unassuming islets hide a fascinating history. As far back as 500 B.C. the ancient Greeks were passing nearby, and more than one of their wrecked ships has been found in the area. Human bones found on one of the larger islands suggest that there was a small settlement here during that time as well.

Later, in the Middle Ages, the islands became a hideout for pirates who took advantage of the region&rsquo;s busy marine trade to attack and rob ships. The pirates used the Islas Medas as a base for raiding the coast.

Finally, in the 15th century, the king ordered a fort built on the Meda Gran, one of the larger islets, and filled it with knights to defend the shipping trade. The pirates were not intimidated and attacked the fort time and time again, until at last the knights abandoned it. A century later, the fort and a chunk of the islet beneath it crumbled into the sea.

The days of adventure were not yet finished on the Islas Medas; in the 1700s the Meda Gran was used as a military prison, and a small base was set up. The base would stay until 1890, when it was finally abandoned. The island was inhabited until 1930, when the last resident &mdash; the lighthouse keeper &mdash; finally left for the mainland. These days there is not so much as a campground on these small, protected islets; L&rsquo;Estartit serves as the home base for those setting out to explore the islands.

The town of L&rsquo;Estartit is a charming place worth visiting even if you don&rsquo;t plan to dive. Sitting at the base of the Montgr&iacute; massif with the sparkling Mediterranean spread out before it, the setting is unbeatable.

The town&rsquo;s other offerings, such as sailboat rental, windsurfing or just sun-soaking on the white, sandy beaches, entertain the non-divers, and a wide variety of hotels, campsites and restaurants keep you eating well and sleeping soundly.

Sarah Andrews is a freelance writer based in Barcelona, Spain.

Where: Costa Brava is the stretch of coastline between Barcelona and the French border, in northeastern Spain. You&rsquo;ll find any season pleasant for roaming in the town of L&rsquo;Estartit or the Costa Brava, but May through late September is particularly good. This time of year, the water is warm and generally calm, and, since it&rsquo;s high season, all of L&rsquo;Estartit&rsquo;s restaurants and hotels are open.

August, the month most Spaniards take for vacation, is by far the busiest. For fewer crowds and a much slower pace, visit in winter, when the weather is chilly but you&rsquo;re nearly guaranteed a peaceful, solitary diving experience.

For more information on the area, check out www.costabrava.org.

Cost: The price of a single dive including equipment hovers around 25 euros (about $32), though speciality dives like night dives or first-timers&rsquo; &ldquo;try dives&rdquo; may have different prices. Certification courses are available starting at 350 euros and may be offered over a week or two weekends.