Copenhagen's Royal complex offers a day’s worth of history 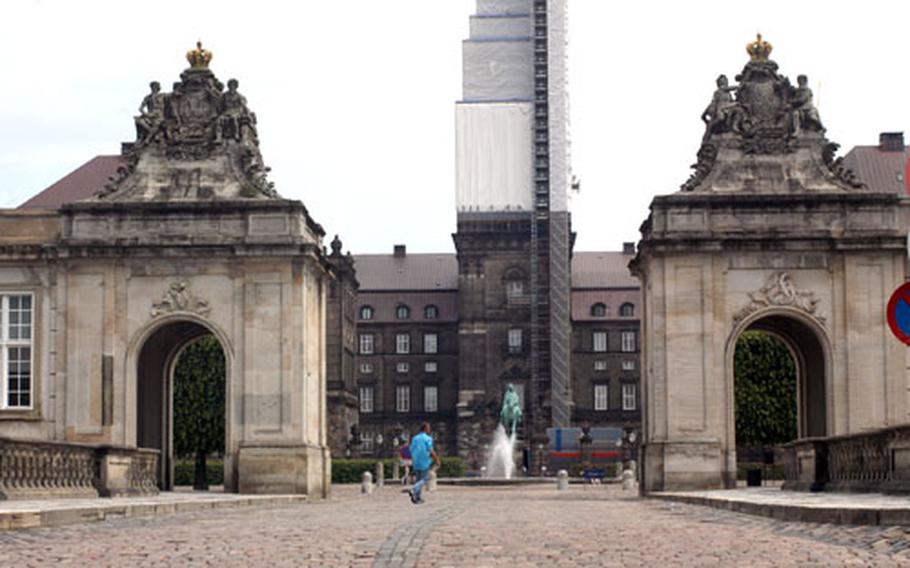 One of the entrances to the Slotsholmen in Copenhagen, Denmark, shows the under-renovation tower of the Christiansborg Palace in the background. (Ben Murray / S&S)

One of the entrances to the Slotsholmen in Copenhagen, Denmark, shows the under-renovation tower of the Christiansborg Palace in the background. (Ben Murray / S&S) Two women take a break under the fountain in the Royal Library Gardens at the Slotsholmen complex in Copenhagen. (Ben Murray / S&S) The main courtyard in the Slotsholmen, with Christiansborg Palace in the background. (Ben Murray / S&S)

The royal palace complex in Copenhagen is a place of opposing themes.

Unlike other seats of royalty in Europe, which are barred and gated from the public, visitors can walk straight into the Slotsholmen in the Danish capital and up to the door of Queen Margrethe II&rsquo;s Royal Reception Rooms, where she holds formal functions.

But the openness ends at the door. The rooms are only open for guided tours, when visitors are told they must wear protective booties to walk through, turn off their cell phones and refrain from taking photographs and touching anything.

Still, as a destination in central Copenhagen, the Slotsholmen can offer up a good introduction to Denmark&rsquo;s history and its monarchy.

Set on an islet, the Slotsholmen &mdash; meaning the &ldquo;the castle islet&rdquo; &mdash; is a series of buildings that houses both the queen&rsquo;s formal building and no less than six museums.

Christiansborg Palace, the main building, is the third one to stand on the site (the first was back in the 12th century). The other two burned down, and the current structure was completed in 1928, so is relatively new.

The palace now houses the Royal Reception Rooms, the Queen&rsquo;s Library, the audience chambers, the Sovereign in Council rooms, Parliament, the Supreme Court and the prime minister&rsquo;s office.

Of all the areas open to the public, the highlight is likely the reception rooms, an ornately decorated section of the palace where the queen hosts visiting dignitaries and foreign heads of state.

The rooms are full of large paintings and expensive furnishings, according to the guide, but the Danish monarchy is relatively &ldquo;poor&rdquo; compared with other royalty, and the state&rsquo;s income is supplemented substantially by the fee tourists pay to see the castle.

Tours start in the Hall of Giants, an open room with pillars carved to look like giant men, where cameras are stashed and booties are applied over visitors&rsquo; shoes.

From there, it goes up the King&rsquo;s Staircase and into a long series of reception areas, such as the Throne Hall and Velvet Room, where visitors learn about the history of the monarchy and palace from (at least on a recent tour) an exceptionally well-informed guide.

Visitors are told about the lineage of the royal family, the origin of the furniture and fixtures, and even the no smoking policy in the palace (the queen is exempt).

It takes about 50 minutes to go through the place, and is in many respects like many other European palace tours &mdash; until visitors get to the main banquet hall. Here, the Danish palace shows a unique flair, and instead of colossal chandeliers and silver tea sets, the room is nearly wallpapered in bright colors woven into a set of massive tapestries designed by a modern artist for the queen.

The palace is just one attraction in the Slotsholmen, also home to the Danish Jewish Museum, the Royal Library, the Theatre Museum, Thorvaldsens Museum (a compendium of art and sculpture), the Coach Museum and the Royal Danish Arsenal Museum.

The arsenal museum has a huge collection of hand-held weapons spanning the time line of conflict in Denmark from the spiked club to the modern machine gun. On display in particularly large numbers is a vast set of swords, cutlasses, sabers, daggers and rapiers, supplemented by large quantities of rifles, axes, pistols, spears, maces and muskets.

In the basement, cannon upon cannon are lined up next to one another across from rows of artillery pieces, anti-aircraft guns and even a World War II V-1 rocket.

While tours are offered in English at the palace, the arsenal museum has virtually no English translations for the weapons on display, making the origin of much of the collection a mystery.

Many of the artifacts speak for themselves, however, and for a day&rsquo;s worth of history in Copenhagen, the Slotsholmen can deliver.

Know and go ...Guided tours of Christiansborg Palace, with the Royal Reception Rooms and the Great Hall with Bj&empty;rn N&empty;rgaard&rsquo;s tapestries, are given in English at 11 a.m., 1 p.m. and 3 p.m. daily between May 1 and Sept. 30; and at 3 p.m. every day except Monday from Oct. 1 to April 30. More frequent tours are are available in Danish.