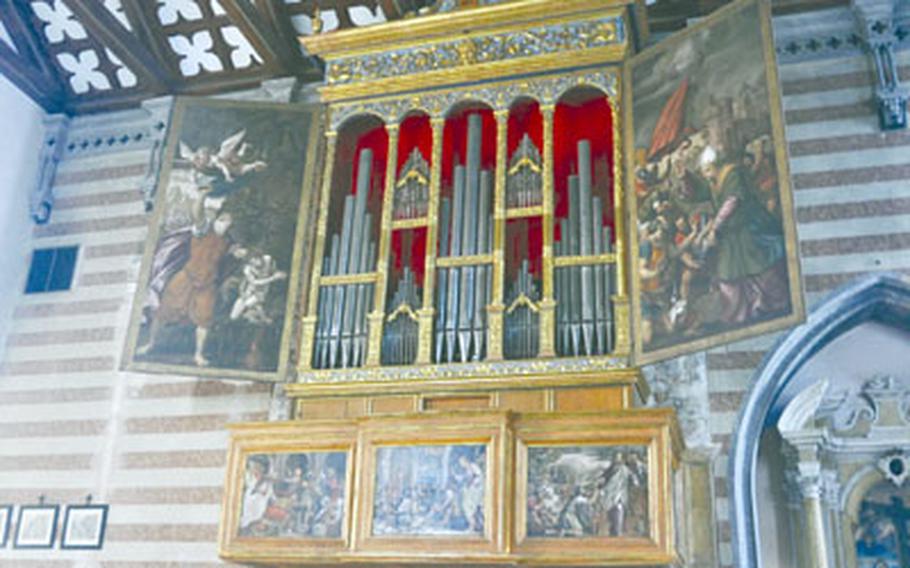 Buy Photo
They don’t build ’em like they used to, especially when it comes to Venetian organs. This organ, which is still in use, was built around 1500. It is housed in the parish church in Valvasone, Italy, a short drive from Aviano Air Base. Its cabinet was painted by Giovanni Antonio, the most famous artist in the region at the time, and his son-in-law. (Photos by Kent Harris/Stars and Stripes)

Buy Photo
They don’t build ’em like they used to, especially when it comes to Venetian organs. This organ, which is still in use, was built around 1500. It is housed in the parish church in Valvasone, Italy, a short drive from Aviano Air Base. Its cabinet was painted by Giovanni Antonio, the most famous artist in the region at the time, and his son-in-law. (Photos by Kent Harris/Stars and Stripes) 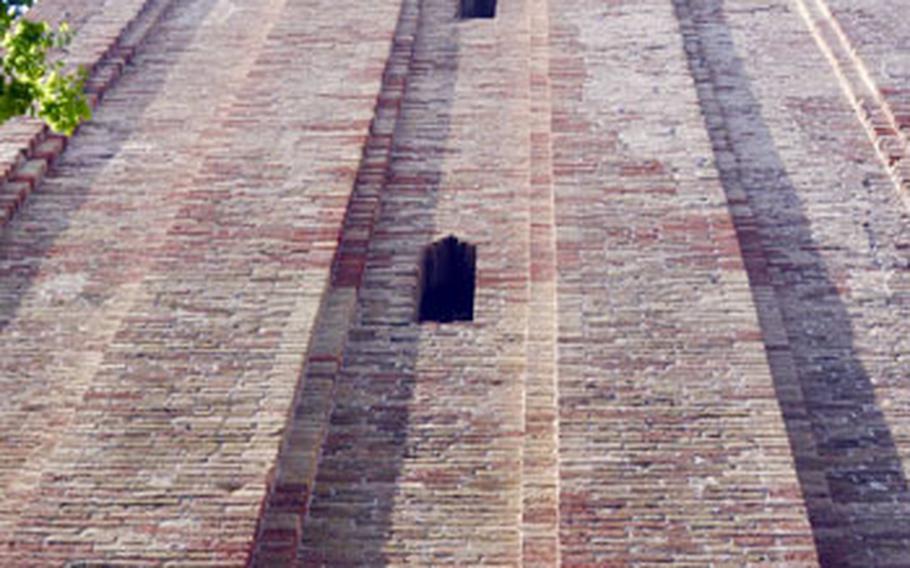 It’s a long way up to the top of the bell tower adjacent to the cathedral in San Vito Al Tagliamento. The tower dominates the skyline near Piazza del Popolo - the city’s main square. () 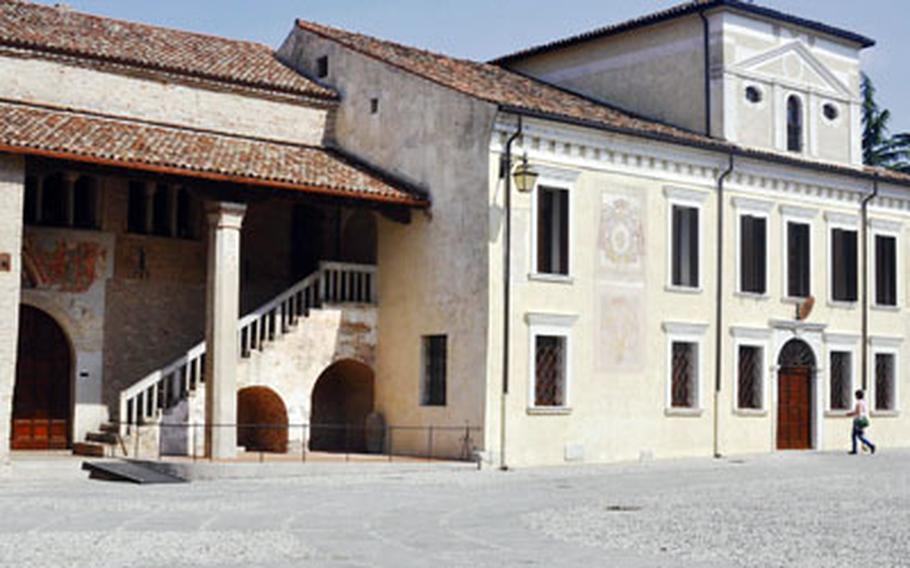 The Benedictine Abbey of Santa Maria in Sylvis doesn’t look all that impressive from the outside in Sesto al Reghena. But the interior is filled with fading frescoes, which give an indication of how the colorful interior once looked. Cameras are prohibited inside. ()

Just about everyone&rsquo;s heard of the Leaning Tower of Pisa, the Roman Colosseum, the canals of Venice and the ruined city of Pompeii.

But there is much more to Italy, and just about every hamlet, village or town has something to brag about &mdash; even if it doesn&rsquo;t draw hordes of tourists. Many of these sites aren&rsquo;t worth spending a whole day on, but group several together and you&rsquo;ve got a full day of sightseeing.

As an example, take three places just a short drive east of Aviano Air Base. Only one of them boasts a population greater than 10,000 people.

Valvasone was in its heyday around the time of Columbus. Its cathedral was built in the late 1400s to house a holy relic. Not long after, Vincenzo Colombo built an organ in Venice, which eventually was moved to the cathedral in the 1530s, and Giovanni Antonio, the most famous artist in the region at the time, was hired to paint the organ cabinet&rsquo;s doors. Antonio died before his work could be completed, but his son-in-law, Pomponio Amalteo, finished it.

The result of their work is almost as impressive as the organ, which, according to town officials, is the only Venetian musical instrument from that time period still in use today.

A few blocks away, the St. Peter, St. Paul and St. Anthony Abbot Church boasts an array of faded frescoes as well as a much-smaller organ. This one is portable, though it doesn&rsquo;t get carried around much these days.

Cross the SS-13 and drive south along the SR-463 and you&rsquo;ll soon enter the city of San Vito al Tagliamento, the largest of the three sites. Drive by the bell tower of the Madonna di Rosa church that straddles the road and head toward the center of town at the next traffic circle.

Piazza del Popolo is the historic main square. The city&rsquo;s cathedral and its tall bell tower sits at one end. Torre Raimonda, part of the old city walls, sits at the other. The Museo Civico Federico de Rocco is located in the tower and details the area&rsquo;s history. The Museo della Vita Contadina &mdash; Museum of Country Life &mdash; is a few blocks from the cathedral. It details the history and activities of the area&rsquo;s farmers.

You can still see some of those farmers at work from the small roads that lead to the third site, Sesto al Reghena. It&rsquo;s known for its Benedictine Abbey, Santa Maria in Sylvis.

The centuries haven&rsquo;t been kind to the frescoes that fill the interior of the abbey, and most have disappeared or faded. But there are still enough remnants for those with some imagination to see how colorful the place must have been in days gone by. The interior is still cool &mdash; literally &mdash; on a hot summer day. And it&rsquo;s possible to take a short walk along the moat that surrounds the abbey.

Sesto is right next to the A28 autostrada, making the drive back to Aviano even quicker.

A visit to Valvasone, San Vito al Tagliamento and Sesto al Reghena doesn&rsquo;t even require a full tank of gas. It&rsquo;s about 14 miles from Pordenone to Valvasone; take the SS-13 through Casarsa and follow the signs. Then, heading south, follow the signs and SR-463 to San Vito; turn right at the traffic circle to leave the main road and head to the historic center. To reach Sesto, get back on SR-463 and head south again. Turn right at a blinking yellow light; the sign is easy to miss. Sesto has its own entrance/exit to Autostrada 28, so it&rsquo;s a quick drive back.

Beware the long lunch hour. Just about everything &mdash; tourist offices, museums and many shops &mdash; close from noon or 12:30 p.m. to 3 p.m. Most sites open at 9 a.m. and close at 6 p.m. The Museo della Vita Contadina in San Vito is open mornings only and is closed Sundays.

The churches and the Museo Civico Federico de Rocco (civic museum) are all free. Admission is 2 euros for the Museo della Vita Contadina. Parking is free if you don&rsquo;t mind parking on the outskirts and walking.

The area is best known for prosciutto (cured ham), with much of it produced in the city of San Daniele di Friuli, a short drive to the north. Most food is similar to that served around Aviano, though there aren&rsquo;t nearly as many menus in English. Many restaurants won&rsquo;t be open for business between lunch and dinner, though cafes are generally open all day long.

Each town has a centrally located tourist office. Valvasone&rsquo;s is to the left of the church entrance. No English spoken, but there are brochures in English. It&rsquo;s closed Sundays. Phone: 0434-898898; web (with some English): www.provalvasone.it. San Vito&rsquo;s tourist office is in the middle of Piazza Popolo. It&rsquo;s closed Mondays and Tuesdays. Phone: 0434-80251; web (Italian only): www.comune.san-vito-al-tagliamento.pn.it/homepage.htm. Sesto&rsquo;s tourist office is in the courtyard across from the abbey. Information on the Museo della Vita Contadina is available at www.ersa.fvg.it/divulgativa/i-musei-della-vita-contadina/museo-della-vita-contadina. Details on the civic museum are at museifriuliveneziagiulia.it/scheda_museo.html?id=50 (both include an English-language option).