The 11th-century Reichsburg Cochem dominates a bend in the Mosel River, a medieval trade route between France and what is now Germany. (Rusty Bryan / S&S)

The 11th-century Reichsburg Cochem dominates a bend in the Mosel River, a medieval trade route between France and what is now Germany. (Rusty Bryan / S&S) 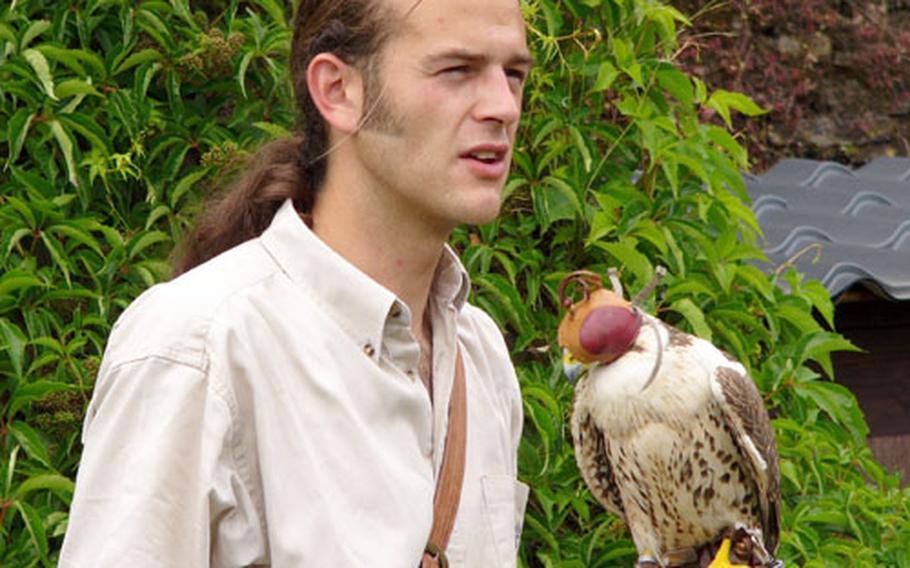 A hunting falcon wears its traditional hood, designed to keep the bird from pursuing prey prematurely, as handler Axel Schroeder explains the device’s purpose and the sport of falconry at Cochem castle in Germany. (Rusty Bryan / S&S) An owl prepares to touch down on a young spectator’s leather glove during the daily birds-of-prey demonstration. (Rusty Bryan / S&S) 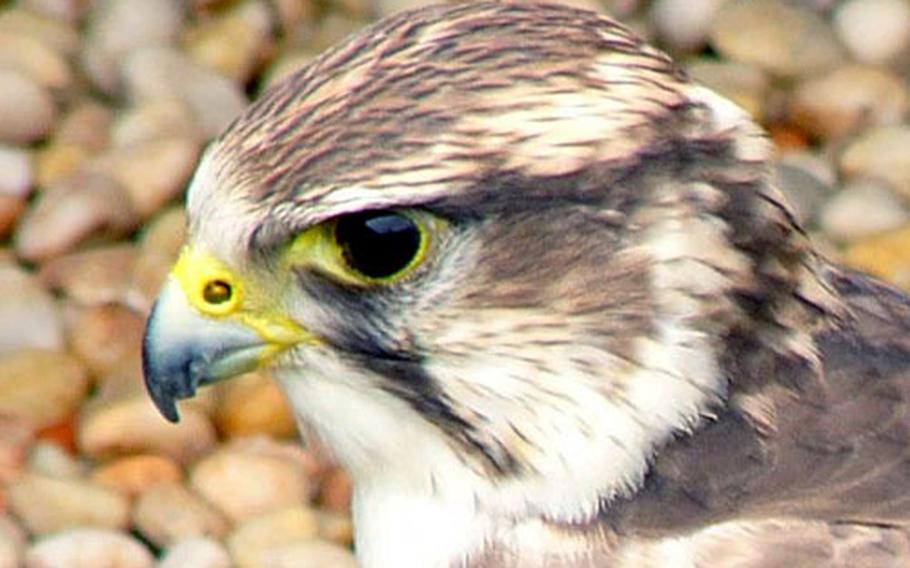 Those with a taste for the past can get a hefty dose of long-ago at Cochem, Germany&rsquo;s, Reichsburg Cochem (Cochem state castle), in the Mosel Valley just two hours or so from the Wiesbaden area.

Although its noble, and later wealthy, inhabitants have long since departed this imposing Gothic pile perched 100 meters above the valley vineyards, Cochem castle today provides an insight into a 1,000-year-old castle, the look at the trappings of wealth in the late 19th century and a sample of a pastime about twice as old as the castle itself. Four times a day, except Monday, birds of prey soar above the ramparts in a demonstration of the 3,000-year-old sport of falconry.

Axel Schroeder keeps owls, hawks, falcons and even an eagle and a vulture on the grounds of the castle and runs the shows. The 40-minute demonstration emphasizes audience participation as well as speed on the wing.

Audience members, usually children, don leather gloves for the opening act. To the delight of their novice handlers, an intense European version of the American screech owl or a barn owl flits from one child to the other to earn scraps of meat.

Two Harris Hawks from Mexico follow the owls. The hawks fly back and forth from the castle walls to Schroeder, then perch on the shoulders of visitors, turning them into so many camera- laden, fanny-pack-wearing Long John Silvers. No peg legs, true, but there&rsquo;s a bird with real attitude next to your ear instead of some clownish parrot.

The program concludes with a lecture, in German, on falconry and a demonstration, by one of three falcons, of the birds&rsquo; spectacular hunting abilities. As attendant Sylvia Bente twirls a leather-and-feather lure around her head, the falcon swoops in again and again on strafing runs from high above the castle walls to intimidate its target into seeking refuge on the ground. When it does, the falcon pounces for what, in earlier times, would have been the kill.

For those who can manage the German language and the 50-euro fee per person, Schroeder offers a nine-hour Falconer for a Day program for participants over age 10. The program provides an introduction to falconry theory, followed by practical experience in training, feeding and handling the birds.

Forty-minute tours of the castle give a glimpse of the 19th century&rsquo;s idea of living large. Although the walls and keep date to the 11th century, the castle was destroyed by the French in 1689 and lay in ruins, its main two towers mere stumps, until the 1870s. It was then purchased by a wealthy Prussian businessman who rebuilt it as his family&rsquo;s summer home in his idea of medieval style. Its richness reflects his.

On the QT ...Directions: Leave Autobahn A-48 (Koblenz-Trier) at exit 4, Kaisersesch-Cochem. The town of Cochem is 12 kilometers (7&frac12; miles) away. Cochem also is accessible by the scenic B-49 highway, which runs alongside the Mosel River from Koblenz to Trier; by train from Koblenz or Trier; or by river cruise boat from any stop along the river. To reach the castle, one can climb the steep roads and steps from the town center on foot or take shuttle bus No. 781 from Endertplatz in the town center to the base of the castle, about 100 meters from the gate. The bus runs twice an hour during peak visiting times, from May 1-Oct. 31. Taxis are permitted to drive to the castle gate.

Times: The castle is open daily from 9 a.m.-5 p.m. Guided tours (in German, but with English leaflets and mostly bilingual guides) depart every 40 minutes or so and are mandatory to see the castle. Groups can schedule English-language tours in advance. Birds-of-prey shows are 11 a.m. and 1, 2:30 and 4 p.m. daily, except Monday.

Food: There is a terrace restaurant in the castle, moderately priced, with views over the Mosel Valley. Advance booking is required for the castle&rsquo;s weekend medieval banquets, four-hour events priced at 39.50 euros per person. The town of Cochem below contains numerous restaurants, many with flower-bedecked riverside terraces, and snack bars of all types and price ranges.