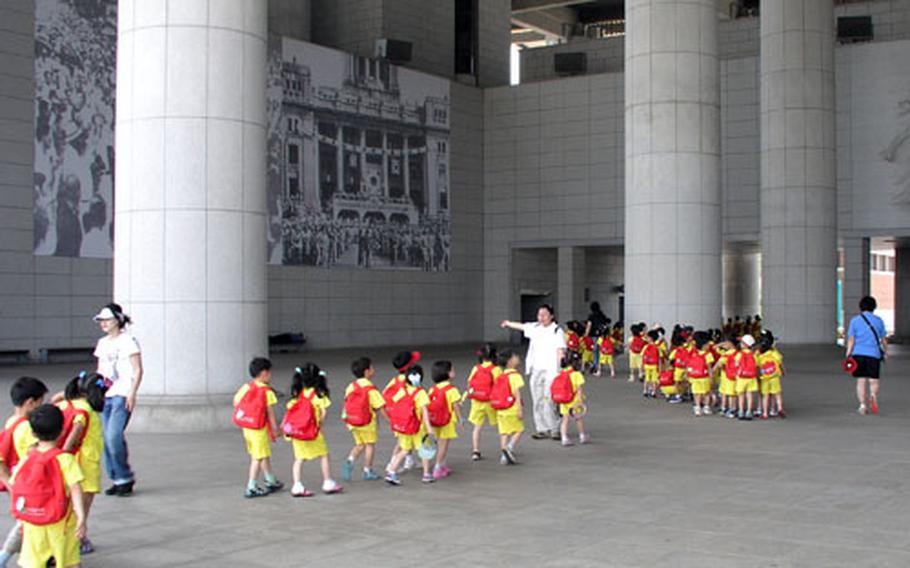 Groups of school children are a common sight at South Korea’s Independence Hall of Korea in Chonan. These children are making their way through the Grand Hall of the Nation, focal point of the vast, open-air complex devoted to the history of Korea’s efforts to oppose Japanese domination. Japan colonized Korea from 1910 to 1945. (Franklin Fisher / S&S)

Groups of school children are a common sight at South Korea’s Independence Hall of Korea in Chonan. These children are making their way through the Grand Hall of the Nation, focal point of the vast, open-air complex devoted to the history of Korea’s efforts to oppose Japanese domination. Japan colonized Korea from 1910 to 1945. (Franklin Fisher / S&S) 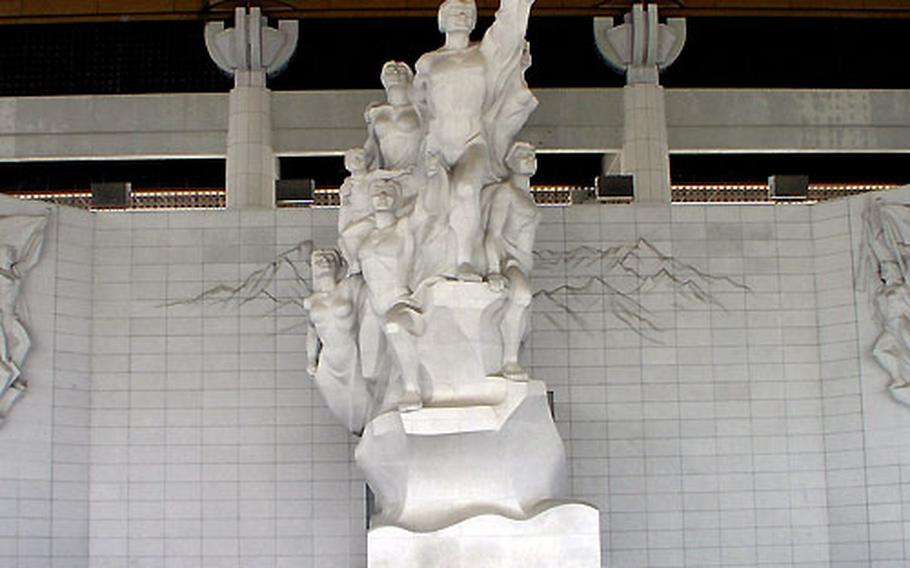 The granite Statue of Indomitable Koreans stands inside the Grand Hall of the Nation. (Franklin Fisher / S&S) Looking across the Grand Plaza of the Nation toward the Grand Hall of the Nation, centerpiece of the complex in Chonan. The Grand Hall is the largest tile-roofed “house” in Asia, according to South Korean government literature. The Independence Hall complex includes seven exhibition halls. (Franklin Fisher / S&S) A pond at a quiet corner of the Independence Hall of Korea complex. (Franklin Fisher / S&S)

CHONAN, South Korea &mdash; The Independence Hall of Korea is not one hall but a vast, scenic complex of paved promenades, grassy enclaves, and placid ponds, the largest tile-roofed building in Asia, and numerous exhibition halls, all devoted to the history of Korea&rsquo;s struggle against Japanese domination.

American servicemembers who want insight into the history and political outlook of modern Korea, or who just want a quiet bench among grass and trees, have the option of day trip to the Independence Hall complex, a venue reachable by car, bus or train.

In sunny weather, sunglasses and other protections are advisable because much of the complex lies open to the sun. And visitors should be prepared for lots of walking, especially from the front entrance to the main exhibition area.

The crowning feature of this exhibition area and indeed the centerpiece of the Independence Hall complex is the imposing, 15-story, templelike, Grand Hall of the Nation, which, according to the Korean government, is the largest tile-roofed house in Asia.

Its curved, gray-tiled roof and columnlike pillars occupy a stately place at one end of the Plaza of the Nation, a 258-meter-long expanse paved at its center with granite flagstones.

Throughout the year, the Plaza is a gathering place for thousands who attend music festivals, memorial ceremonies, and other large-scale public events.

At many points around the complex are areas of trees, shrubbery, benches, and ponds, affording a setting that might be just the thing for a quiet, relaxed conversation among friends.

But for those wanting a look at Korea&rsquo;s history and some of the traumatic national events that have left an imprint on the national psyche, its museumlike exhibition halls behind the Grand Hall offer much to see, hear, and ponder. Explanatory information for the exhibits is posted in Korean, English, Chinese and Japanese.

Photographs and other information are displayed on wall-mounted posterboards. Important historical documents and other artifacts are in glass display cases. Weapons, uniforms and battle flags are exhibited.

And life-size mannequins in period costume go about their business frozen in time behind large glass windows, giving visitors a glimpse of what Korean life was like in an earlier period.

In one such display, a mannequin is dressed as a phone switchboard operator in the early 1900s, seated before his large telephone switchboard, providing a look at the clothing and technology of Korea in that period.

Another display features three mannequins seated on the floor around a small handpress. An accompanying sign says: &ldquo;Transcribing The Declaration of Independence: A miniature.&rdquo;

The tone of some displays is in many instances unabashedly indignant toward Japan.

In &ldquo;The Hall of the Japanese Aggression,&rdquo; for instance, a sculpture is accompanied by a sign: &ldquo;Triumph Over Tribulation: This sculpture symbolizes the fervent yearning of the Korean nation for independence and nation revival during the cruel period of Japanese colonial rule when the Korean people suffered under threat of such magnitude that they very nearly succumbed to the Japanese attempt to wipe out Korean culture altogether."

The Independence Hall complex is closed Mondays, unless the Monday is a Korean holiday. Hours during March through October are 9:30 a.m. to 5 p.m. and hours during November through February from 9:30 a.m. to 4 p.m.

More detailed information on how to get there by car, bus or train, as well as details on admission fees, hours, and the Hall&rsquo;s exhibits and special programs, is available on the Internet at: http://www.independence.or.kr. See the link for "English."