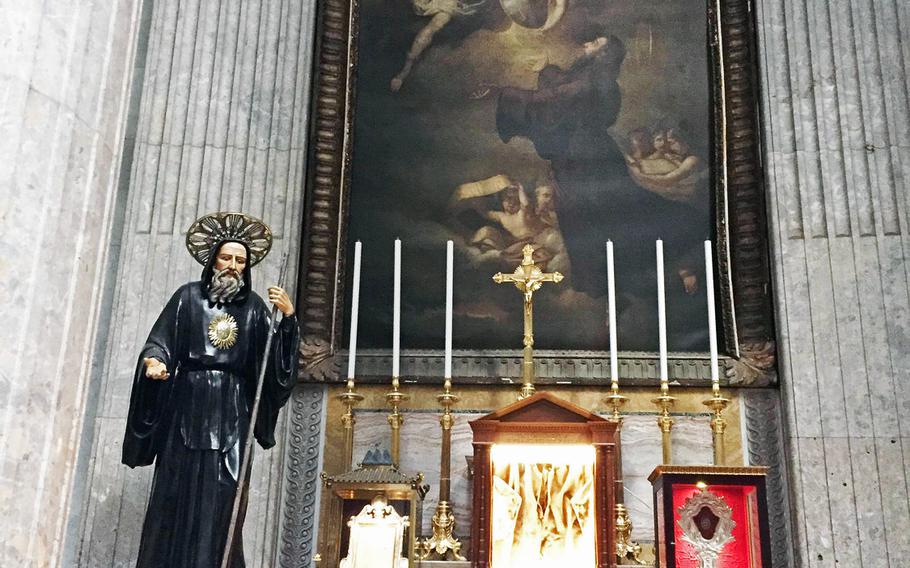 Buy Photo
One of several shrines for St. Francis of Paola, for whom King Ferdinand 1 dedicated the cathedral, which was completed in 1816. It now stands at the Piazza del Plebiscito, a giant public square in Naples, Italy. (Scott Wyland/Stars and Stripes)

Buy Photo
One of several shrines for St. Francis of Paola, for whom King Ferdinand 1 dedicated the cathedral, which was completed in 1816. It now stands at the Piazza del Plebiscito, a giant public square in Naples, Italy. (Scott Wyland/Stars and Stripes) Buy Photo
The Basilica di San Francesco di Paola blends a neo-classicist Roman style with traditional church trappings such as shrines and altarpieces. The church is open to tourists in the mornings and evenings. (Scott Wyland/Stars and Stripes) 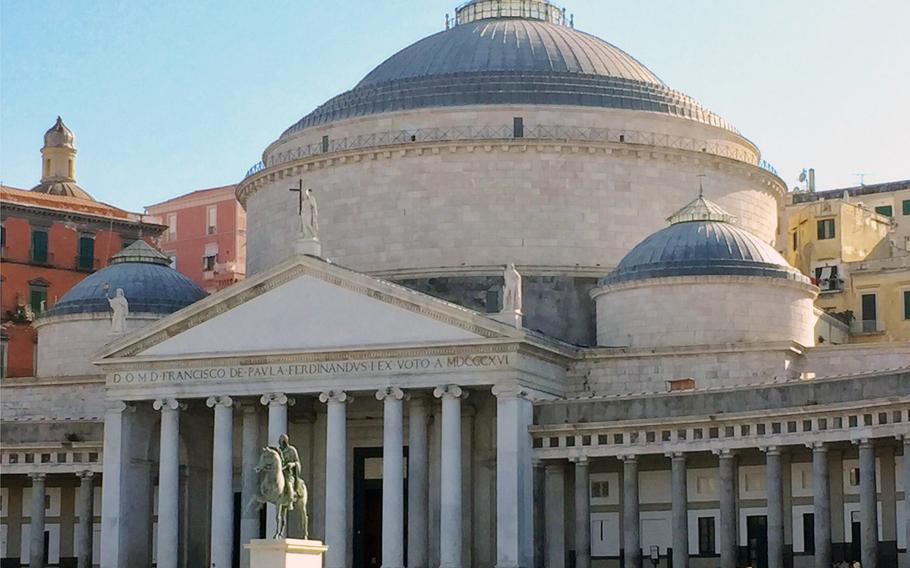 Buy Photo
The cathedral's majestic domed ceiling and round skylight are like a celestial eye. (Scott Wyland/Stars and Stripes)

From a distance, the majestic brown-and-gray dome looks as if it were airlifted from Turkey and placed in downtown Naples, Italy. The Basilica di San Francesco di Paola defies the conventional design of a Catholic cathedral or even the city’s other domed churches. Its striking incongruence and grandeur make it worth a visit. Built in 1816, it stands at the edge of a huge public square called the Piazza del Plebiscito, directly across from the Royal Palace. Its portico, supported by six columns, is a classic Roman design. Many compare it to the Pantheon in Rome. However, its large, tan-brick dome flanked by two smaller domes adds a Byzantine feel. Inside, the church is adorned with columns, large statues, ornate friezes and shrines of Francesco di Paola. The expansive domed ceiling capped with a skylight creates the effect of a giant celestial eye. King Joachim Murat of Naples commissioned work on the structure and plaza as a tribute to his brother-in-law Napoleon. He died before the project was completed. When the Bourbons regained power of Naples, King Ferdinand I finished construction and made the building a cathedral. He dedicated it to St. Francis of Paola, who had stayed at a former monastery on the site in the 15th century. Two bronze equestrian statues — turned green with age — stand in the front of the church. One is of Ferdinand, the other is of Charles III of Bourbon. Local legend says if you can walk with your eyes closed from the Royal Palace across the entire square and go between the two statues, you’ll have indefinite good luck. Best to try that with a friend nearby to avoid an unlucky collision with another visitor.

The Basilica di San Francesco di PaolaDIRECTIONS West side of Piazza del Plebiscito; Via Gennaro Serra and Via Nuova Pizzofalcone, 80132 Naples, Italy. Street and garage parking is available in the area. TIMES 8:30 a.m.-noon; 4:30-7:30 p.m. every day COSTS None INFORMATION Phone: +39 340 399 0187; No email or website.