Carnival: Call it by any name, it's a reason to celebrate 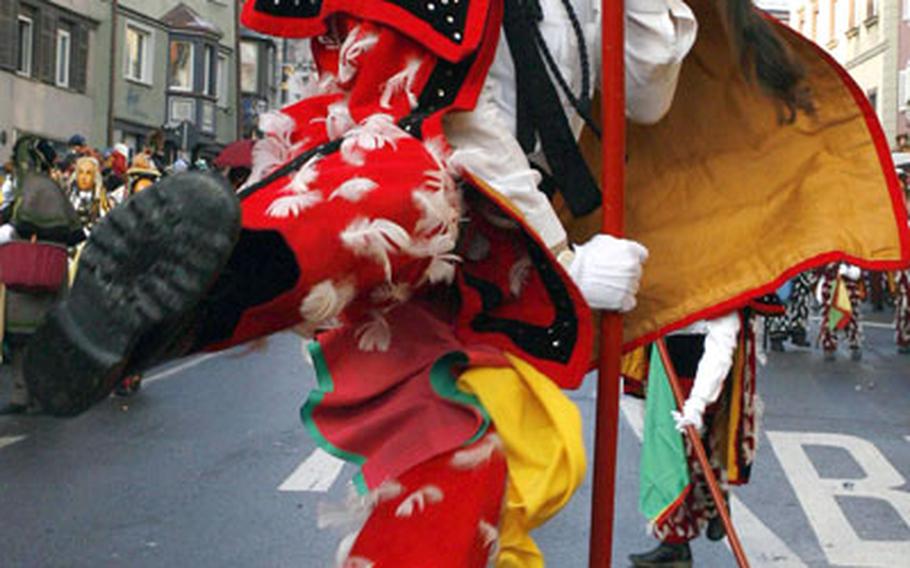 A carnival participant dressed in a Federahansel (Feather Jack) costume uses a stick to jump down the street during the traditional Narrensprung (Fools Jump) in Rottweil, Germany, in 2006. (Michael Abrams / S&S)

A carnival participant dressed in a Federahansel (Feather Jack) costume uses a stick to jump down the street during the traditional Narrensprung (Fools Jump) in Rottweil, Germany, in 2006. (Michael Abrams / S&S) 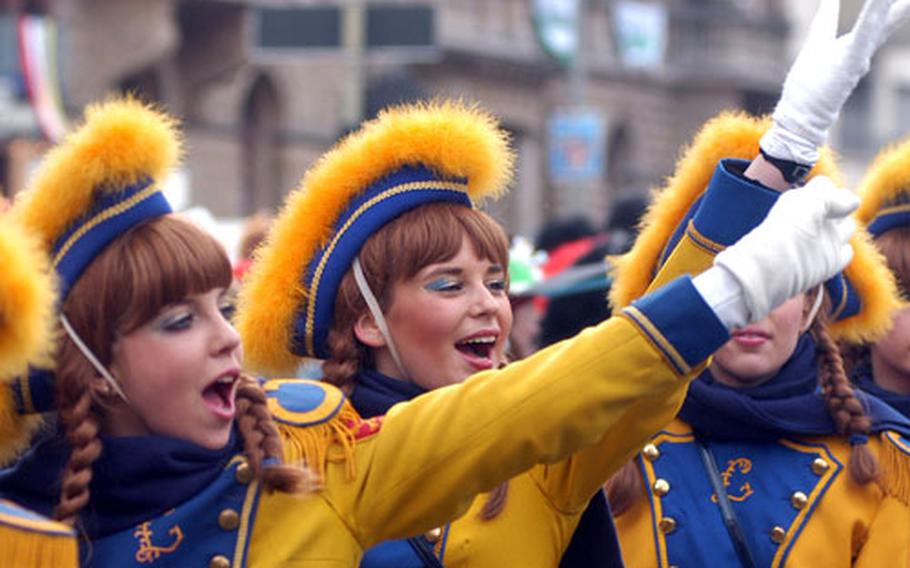 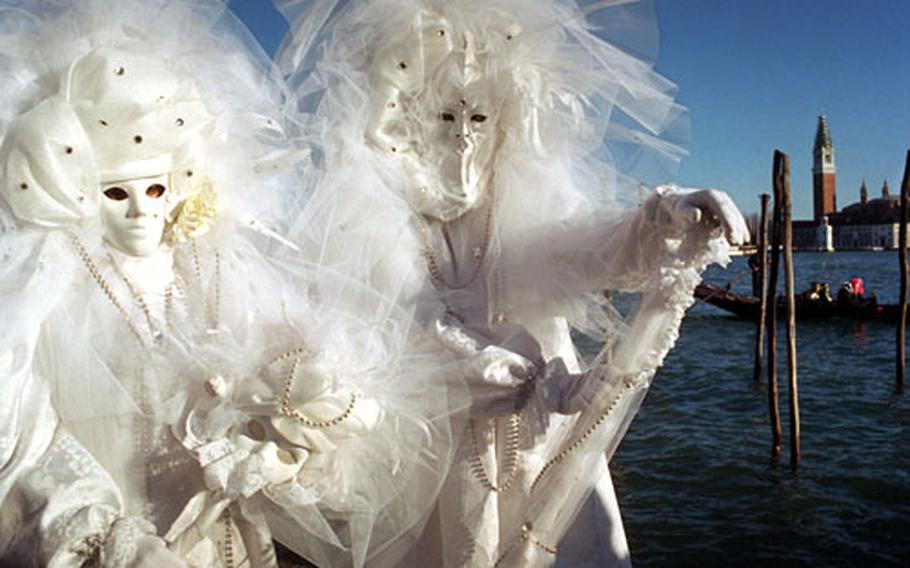 A pair of costumed revelers pose along the Bacino San Marco during the Carnevale de Venezia celebrations in Venice, Italy. (Michael Abrams / S&S) 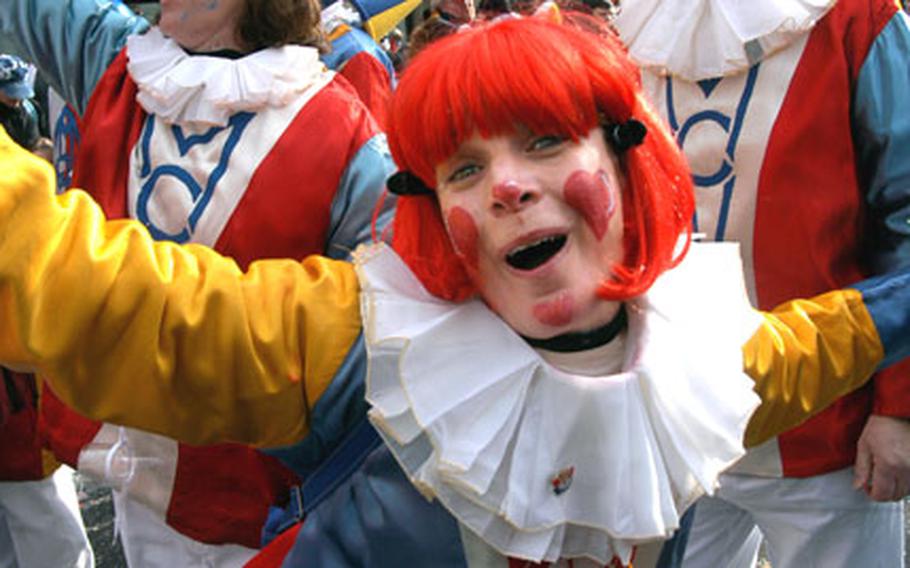 All dressed up at the Mainz Rose Monday parade. (Michael Abrams / S&S) 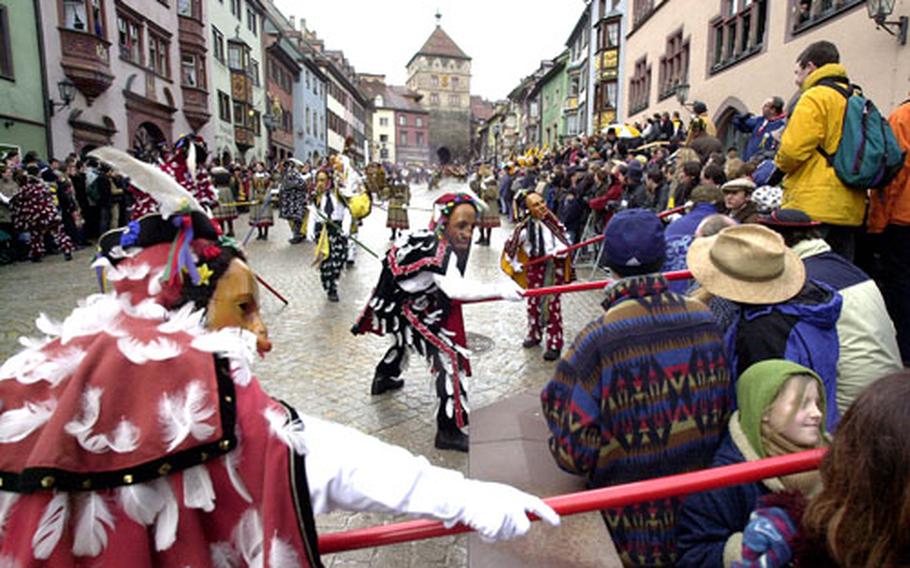 A group of "Federahannes", one of the figures of the "Narrensprung" ("Fools Jump") in Rottweil tease spectators with the calv&#39;s tail at the end of their pole. The event takes place every Rose Monday at 8 a.m. and is repeated on Fat Tuesday. (Michael Abrams / S&S)

It is carnival time in Europe. From now until Ash Wednesday (Feb. 21 this year) &mdash; and in some places a little longer &mdash; it is a wild, weird and wacky season of masks, parades and parties.

It is celebrated from Patras, Greece, to Las Palmas in the Canary Islands, and many places in between.

The origins of carnival and its name are uncertain. Some say it was an old pagan custom to drive away the evil spirits of winter. Others claim it is rooted in ancient celebrations to Dionysus, the Greek god of wine. Much later, and to the present day, it is the last chance to overindulge before the lean days of fasting for Lent.

That is probably what gave the celebration its name: carne vale, Latin, meaning &ldquo;meat, farewell.&rdquo; Apokreo, its Greek name, has the same meaning, while German Fastnacht, literally &ldquo;fast night,&rdquo; refers to the the night before fasting begins on Ash Wednesday.

Although much of the continent has grown closer since the introduction of the euro, carnival is celebrated in different ways from country to country. And sometimes quite diffently within a country&rsquo;s borders.

Take Germany, for example. Here, where carnival is considered the &ldquo;fifth season,&rdquo; it is called, among other things, Fastnacht, Karneval, Fasching and Fasnet.

Along the Rhine River, it is celebrated with big parades on Rose Monday (Feb. 19 this year). In Mainz, Cologne and D&uuml;sseldorf, more than a million people will line the streets &mdash; many in costume &mdash; to celebrate as floats, marching bands and Narren (fools) of the carnival guilds pass by.

In the Black Forest, the members of the guilds wear carved wooden masks as they parade through villages such as Rottweil and Schramberg. The former is famous for the Narren- sprung, in which some participants vault along the parade route on a short stick. The latter is known for its Da-Bach-Na-Fahrt, in which contestants ride a barrel-like boat down a local stream.

In Munich, the celebrations culminate on Fat Tuesday, when the market women dance on the Viktualienmarkt, a downtown market.

The carnival highlights of Italy are in Venice, Viareggio and Acireale on Sicily.

Best known is the Carnevale di Venezia, with its elegant masks and costumes. Gliding along the canals in gondolas or posing for tourists on the Piazza San Marco, the masked denizens are a sight to see. Otherwise most of the Venice carnival is celebrated at fancy (read expensive) costume balls.

In Viareggio and Acireale, they celebrate with parades, and the Viareggio floats are quite spectacular.

Nice is the place to be in France, where King Carnival reigns. New Orleans&rsquo; Mardi Gras and California&rsquo;s Parade of Roses are perhaps descendants of the celebrations there.

The Benelux countries party, too. In Binche, Belgium, Shrove Tuesday is the day of the Gilles. They wear orange costumes and masks with eyeglasses, a mustache and beard painted on them. In the early morning, the drummers of the Gilles society go from house to house drumming up their members. Then between 10 a.m. and noon they perform dances in front of the city hall. The Grand Parade begins at 3 p.m. with the Gilles now dressed in hats decorated with ostrich feathers.

In Maastricht, Netherlands, the time to party is from the Sunday before Ash Wednesday, when the Mooswief &mdash; an effigy of a city statue &mdash; is raised on a mast, until exactly midnight Tuesday night, when it is lowered. In between, the city is one big street carnival.

Two places big in Greek carnival are Rethymno on Crete and Patras on the mainland. The celebrations begin on &ldquo;Burnt Thursday,&rdquo; two Thursdays before Lent, and reach their peak on the Sunday before Lent.

Farther up the Adriatic coast in Croatia, Split and Rijeka are the big carnival towns. The International Parade in Rijeka, on the Sunday before Ash Wednesday, draws close to 100,000 people.

To escape the central European winter, try carnival in Spain. Cadiz, just across the bay from Naval Station Rota, and the Canary Islands host big celebrations. In both places, carnival lasts beyond Ash Wednesday.

Not to be outdone by their neighbors, Portugal also celebrates the season, particularly in towns along the west coast.

There is a big Rose Monday parade in Lucerne, Switzerland, but it is a week later in Basel, where the highlight of Swiss carnival takes place.

At 4 a.m., the lights of the city go off. The sounds of drums and piccolos waft eerily through the darkness. Then from all directions the musicians from the Fastnacht cliques of Basel, wearing masks and small candles on their heads, crisscross the old town playing their songs. It ends at dawn as spectators and participants head for bars, cafes and restaurants, to have a drink and warm up on the traditional Mehlsuppe, a thick flour soup. In the afternoon, the bands start up again and the fun continues.

There are plenty of places to enjoy carnival in Europe. And much of it takes place somewhere near you. Don&rsquo;t miss the fun.