Yoko Suzuki, above, a licensed practitioner of homeopathy, enjoys the scent of lemon-scented eucalyptus, one of more than 200 kinds of herbs grown in her garden at the farm, Carnelian. (Chiyomi Sumida / S&S)

Yoko Suzuki, above, a licensed practitioner of homeopathy, enjoys the scent of lemon-scented eucalyptus, one of more than 200 kinds of herbs grown in her garden at the farm, Carnelian. (Chiyomi Sumida / S&S) 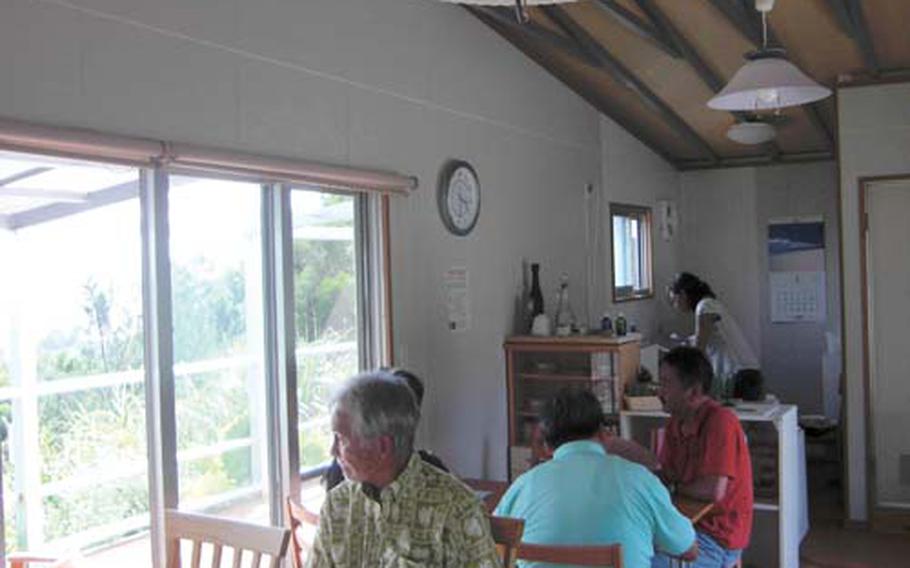 Magnificent mountain and ocean views from the cafe at Carnelian entrance visitors, who can enjoy herbal tea and refreshments that lavishly use homegrown herbs and vegetables. (Chiyomi Sumida / S&S) 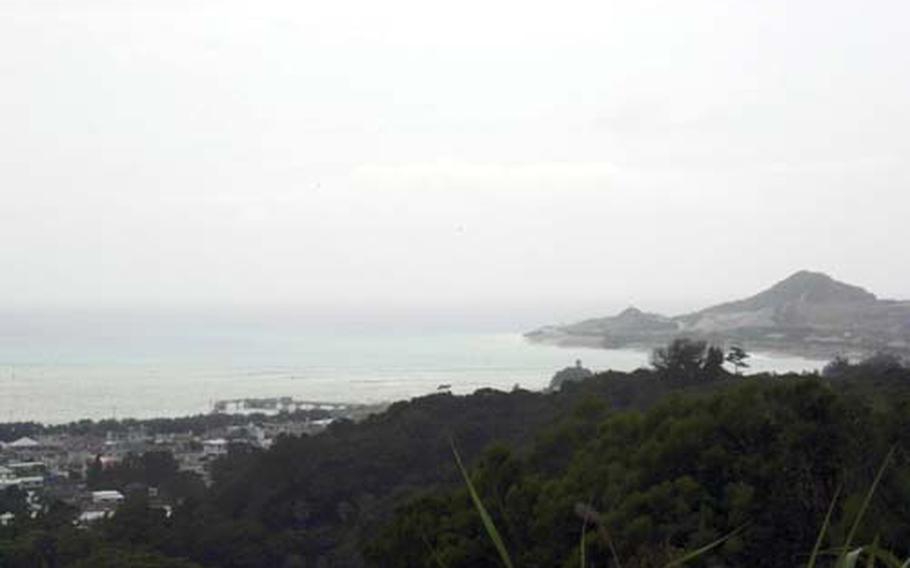 The Suzukis’ farm, Carnelian, lies on a hilltop on Motobu peninsula. A panoramic view of the East China Sea is an extra treat to visitors to the farm. (Chiyomi Sumida / S&S) Fresh dill, basil and tomatoes garnish a pizza at the coffee shop. More than 200 kinds of herbs are grown at the farm’s herb garden. (Chiyomi Sumida / S&S)

Deep in a lush Okinawan mountain range, standing quietly at the edge of a hill, is a tiny cafe overlooking the East China Sea.

In front of the shop is a well-tended garden, where more than 200 kinds of herbs grow under the strong summer sun. A stretch of terraced fields beckons visitors toward the woods. Nearby, fully loaded Okinawan tangerine trees are already promising a bountiful harvest season.

Dr. Makoto Suzuki, an author of the best6selling book &ldquo;The Okinawa Program,&rdquo; and his wife, Yoko, opened Carnelian, the cafe and 5-acre farm eight months ago.

&ldquo;When I stood here on top of the hill three years ago, I could tell instantly that this is the place we have been looking for,&rdquo; he said while standing proudly on the balcony that commands a view of the East China Sea to the west and Mount Awa, Mount Katsuu and Mount Yae to the east.

Suzuki, 75, co-authored the book in 2000 with two Canadian gerontologists, Craig and Bradley Willcox. The book introduces readers to traditional Okinawan diet and exercise. Residents of Okinawa have one of the longest average lifespans.

The farm, the Suzukis say, allows them to continue to help people achieve a healthy and productive lifestyle.

Besides providing herbs that they use in the food they serve at the cafe, the garden also serves as a workshop for children with autism and other developmental disorders, as well as cancer patients and people who suffer from depression. Weeding and tending the garden is part of the therapeutic remedy offered by Yoko, a licensed practitioner of homeopathy, a medical treatment invented by a German doctor in the 18th century. The holistic approach uses remedies derived from natural substances such as plants and minerals. Since the program began, most of the participants have shown great improvement, she said.

The Suzukis, Tokyo natives, purchased the jungle-like land three years ago and cleared the thicket.

Working outdoors, which stimulates the right side of one&rsquo;s brain, was also good therapy for the doctor himself.

In 1988, he suffered a severe stroke and hovered between life and death. For the first time in his life, he was in a patient&rsquo;s shoes.

The stroke damaged the left side of his brain, paralyzing his speech ability. Through his recovery process, however, he found that one&rsquo;s intact part of the brain &mdash; his right side &mdash; can make up the damaged part if it is correctly trained.

About two months after his stroke, Suzuki was back in his office at the university hospital.

More than 20 years after the stroke, Suzuki, an active cardiologist, continues to train the right side of his brain by working on his farm during the weekends.

For years, Yoko dreamt of opening a retreat center where people could immerse themselves in the richness of nature, which she believes is the best way to improve one&rsquo;s body&rsquo;s natural healing abilities.

&ldquo;It has been my dream to establish such a place since I visited retreat facilities in Canada and England more than 20 years ago,&rdquo; she said.

When the couple visited the patch of land three years ago, it was covered with overgrown weeds and bushes. Yet, they instantly fell in love with the place.

&ldquo;I could feel the presence of a sacred spirit the moment I stood there,&rdquo; Yoko said.

She was convinced that the place that sits in the heart of nature&rsquo;s bounty on Okinawa&rsquo;s northern mountain range had great healing power. Changes first came to her husband, who had not believed in a spiritual healing power. And now, her clients undergoing homeopathy remedy treatment can feel the power, she said.

&ldquo;We want to make this place for everybody to be relaxed, renewed and healed,&rdquo; she said

Next time you drive up north, stop by the cafe to enjoy the gorgeous views as you sip tea and munch on light meals made with organic herbs and vegetables fresh from the garden.

And maybe you, too, can feel the power.