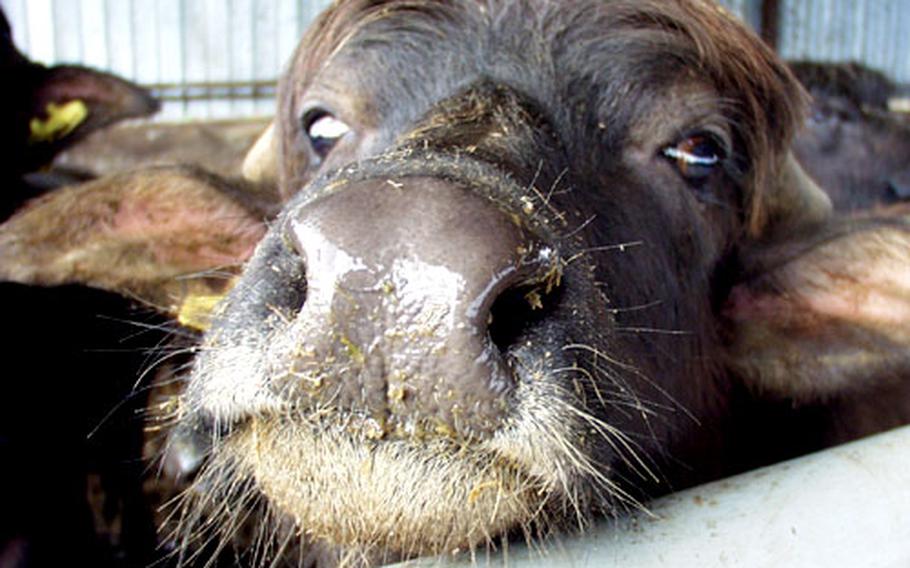 Surprisingly friendly, the water buffaloes like to get a little pat from visitors, and they extend their wet noses to let you know. (Kendra Helmer / S&S)

Surprisingly friendly, the water buffaloes like to get a little pat from visitors, and they extend their wet noses to let you know. (Kendra Helmer / S&S) 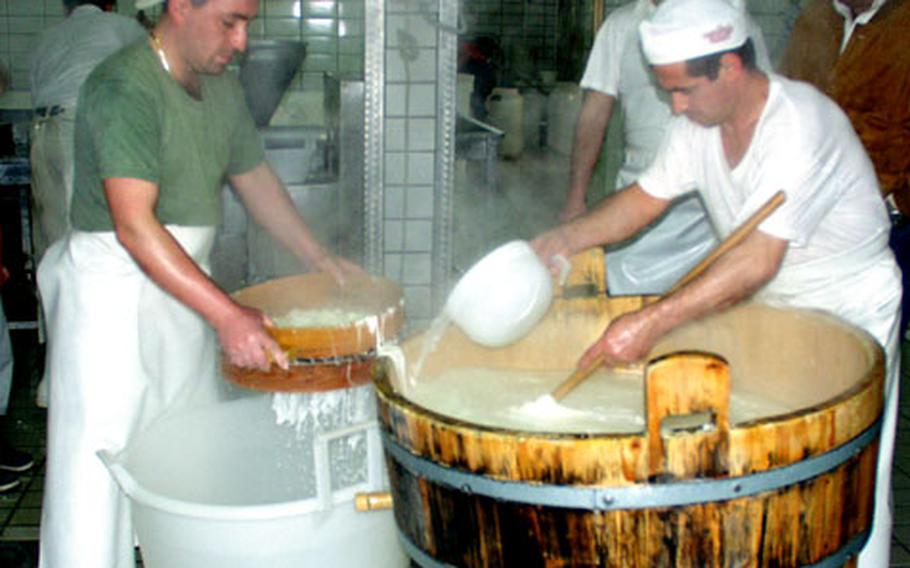 Steam rises as workers mix hot milky water with soft chunks of cheese. In a traditional spinning process, the worker stirs the batch by hand, scooping out the liquid, until the cheese becomes malleable enough to mold into smaller balls. (Kendra Helmer / S&S) An employee of Schiavone Caseificio separates curdled milk to prepare to shred it through a grinder. (Kendra Helmer / S&S) Bruno Schiavone, owner of the “caseificio,” or dairy, shows Stephanie Ortega how to stretch the buffalo mozzarella into balls during the final process of making the product. (Kendra Helmer / S&S) 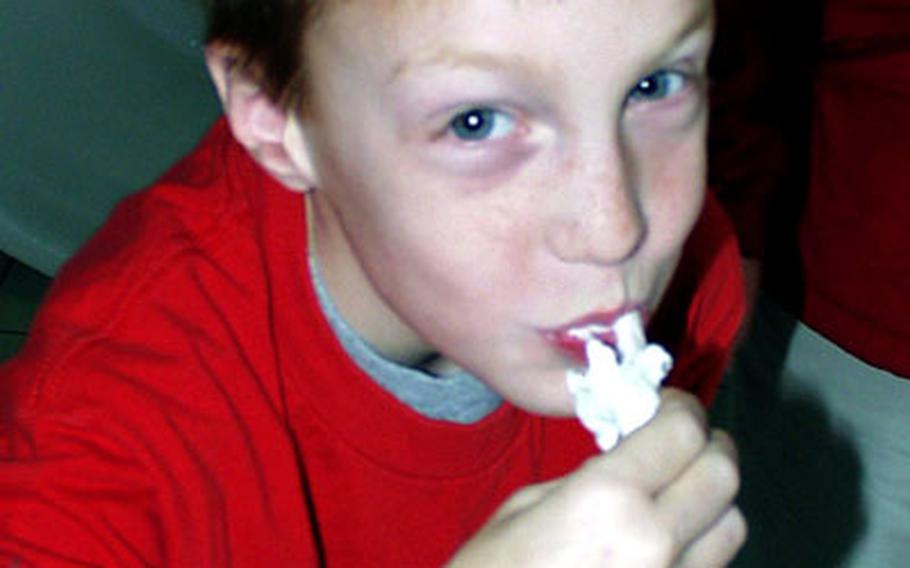 Steam rises from the round wooden tub as Italian craftsmen stir a batch of fresh mozzarella di bufala.

In a centuries-old process, the two men stretch the snowy-white cheese made from the milk of water buffaloes. Tourists snap photos as the men slide around in white rubber boots to create the world-famous cheese made in the area around Naples, Italy, and beloved for its milky bite that squeaks against the teeth.

The craftsmen work in Casal di Principe at Schiavone Caseificio &mdash; one of countless dairies in the Campania region of southern Italy, which is known as the source of the world&rsquo;s best mozzarella.

While base tours take visitors to a caseificio, or dairy, to observe the production process, the bus doesn&rsquo;t always make the muddy trip out to the actual farms. But Bruno Schiavone, 44, owner of the caseificio, agreed to take two Americans and a translator to one of the family&rsquo;s farms recently.

During a scenic drive through green fields and orchards, Schiavone explained how his family got involved in making cheese. Letting go of the steering wheel to gesture, he said they started raising buffaloes in the mid-1800s.

Then, about 15 years ago, the popularity of fresh milk declined. So he came up with the idea of producing cheese. Now the family has 2,000 buffaloes, and each of the six brothers in the family owns his own caseificio.

The drive from Bruno&rsquo;s caseificio to a farm in Capua took about an hour (with a stop for a caff&eacute;, of course). At the farm, more than 100 water buffaloes shuffled about. The creatures aren&rsquo;t to be confused with the bison that graze in American fields; they are a different genus.

&ldquo;Never turn your back on them; you have to be more aggressive than they are,&rdquo; Bruno cautioned.

The creatures seemed more nervous than intimidating as they crept forward, pushing their slimy gray noses out to be petted.

Inside a small barn, the 800-pound buffaloes are hooked up to milking machines twice a day by farm employees. Some buffaloes produce milk for more than 20 years. They eventually are slaughtered and turned into dog meat.

The milk is taken to the caseificio, on the lower level of a yellow two-story building. The family lives upstairs.

&ldquo;The best mozzarella di bufala is all natural,&rdquo; Schiavone said. His dairy uses organic buffalo feed and there are no chemicals in the factory where the cheese is made.

More than a dozen Italians work in the dairy &mdash; the men in the production, the women behind the counter &mdash; to produce 650 pounds of cheese a day in the winter, double that in the summer.

During an hourlong tour, Gennaro Tassiero, a tour guide for Information, Tours and Travel, explained the production process.

The milk is pasteurized. Rennet, the membrane lining a calf stomach, is added to curdle the milk.

The craftsmen then cut the large curds into smaller pieces and push them through a strainer. The curds are placed in a large wooden tub with the hot, milky liquid left over from the earlier cutting.

As steam rises around them, two men stir the batch with paddles to make it soft and malleable, dipping out the liquid until all that remains is a large pillow-sized ball of rubberlike strands of cheese.

Using their hands, the men immerse the strands in a tank filled with cold water.

With the aroma of hot milk in the air, the chatty Italians show the tourists how to stretch and break the cheese into baseball-sized balls. (&ldquo;Mozzarella&rdquo; comes from the word mozzare, which means to cut).

&ldquo;My wife kicks me out of the house because of the smell of it,&rdquo; said Giuseppe Cecano, while his co-workers teased him for spending more time sitting in a chair than making cheese.

The final result is a smooth, shiny spherical ball with a slightly fibrous consistency resulting from its tiny layers. It has an extremely thin rind and when sliced produces a white watery fluid.

At the end of the tour, the visitors sample the fresh cheese, though its richness is best appreciated hours later.

Helen Wilmot pulled her two children, Henry, 8, and Ellie, 5, out of school for the tour. They went just days before they moved to Turkey. Like others leaving the area, she listed mozzarella di bufala as one of the things she would miss most about local food.

&ldquo;Where else in the world do you get to see mozzarella di bufala made?&rdquo; she asked. &ldquo;Not all education is in the classroom.&rdquo;

&ldquo;I&rsquo;m allergic to it,&rdquo; he shrugs.

The cheese is sold at the dairy and in stores in either baseball-sized or smaller balls called bocconcini. It is stored in its own milk and sold in a plastic bag.

The real stuff is labeled on packages or menus with either a DOC or DOP sign on packages to attest to its authenticity under European Commission law.

It costs about 8 to 9 euros per kilogram in the Naples area, roughly $5 to $6 per pound. It sells online in the States for more than double that.

Some dairies also offer scamorza, a smoked version of buffalo mozzarella, and ricotta cheese made from buffalo milk.

Mozzarella di bufala should be eaten as soon as possible after it is made, within no more than three days, after which it loses elasticity. Its surface should never be rough or wrinkled. Keep it in its own liquid at room temperature in a non-metal container and do not refrigerate. Ten minutes before eating it, put it in warm water.

Serve it on a piece of fresh bread on its own or in a Caprese salad (with tomatoes, rucola, olive oil and basil; see recipe below). Or cook it with pizza, pasta or vegetables.

For some mozzarella recipes, visit http://www.caseificiolacasertana.com/eng/come_gustarla.htm.

Naples&rsquo; Information, Tours and Travel has monthly tours to factories that make mozzarella di bufala. Cost is $4 for adults and $2 for children. The tours, however, don&rsquo;t stop at the actual buffalo farms when the ground is too wet.