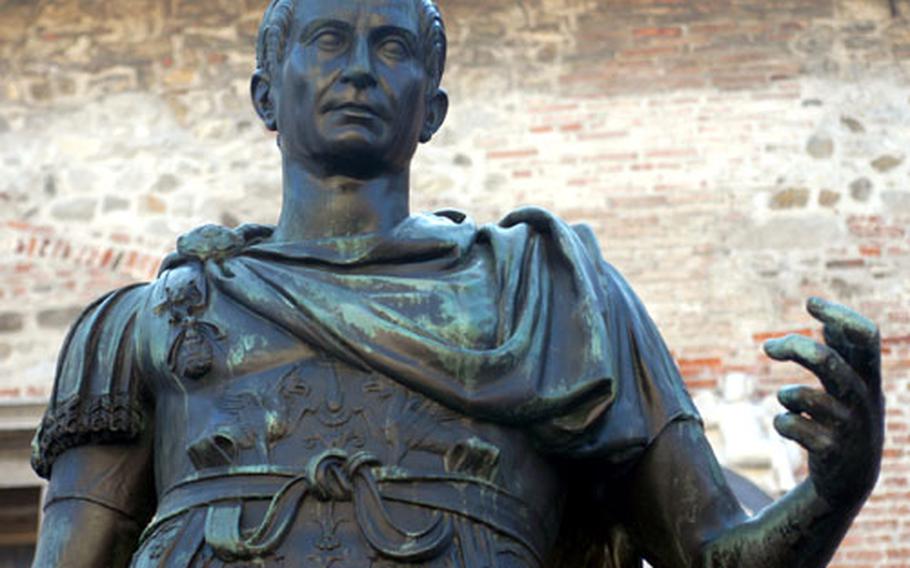 A statue of Julius Caesar, who supposedly founded the city, stands in the center of Cividale. (Michael Abrams / S&S)

A statue of Julius Caesar, who supposedly founded the city, stands in the center of Cividale. (Michael Abrams / S&S) 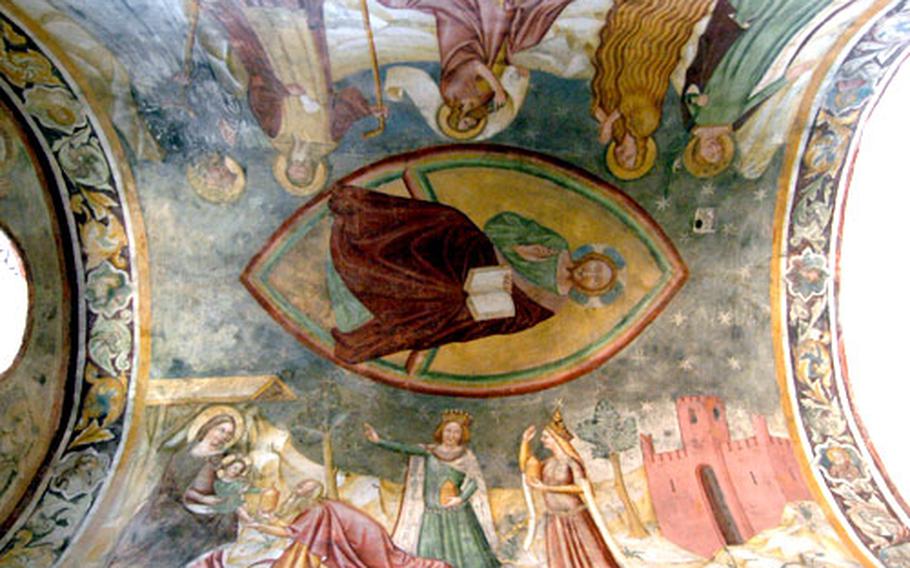 The Tempietto Longobardo, or Lombard temple, is famous for its eighth-century stuccoes and frescoes, such as this one on the ceiling. (Michael Abrams / S&S) 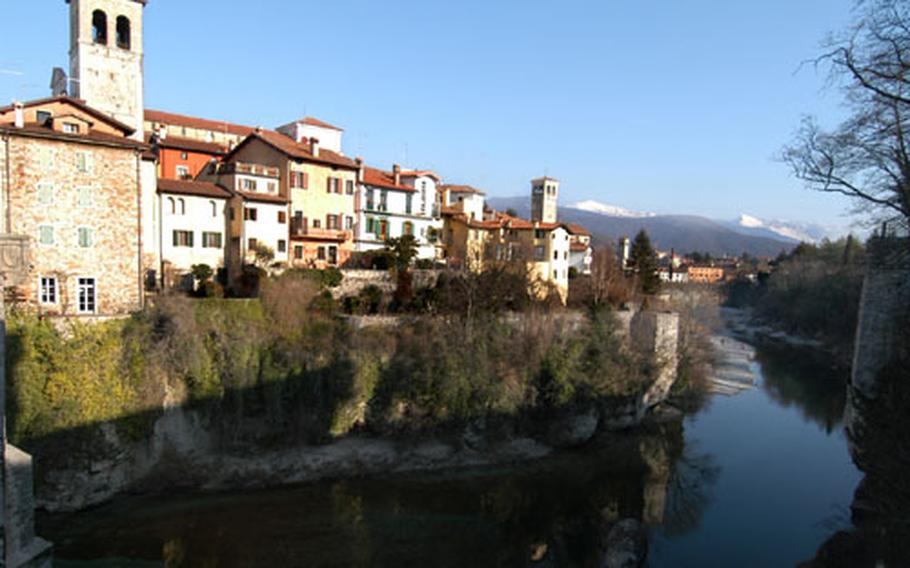 The old Italian village of Cividale is reflected in the Natisone river. (Michael Abrams / S&S) 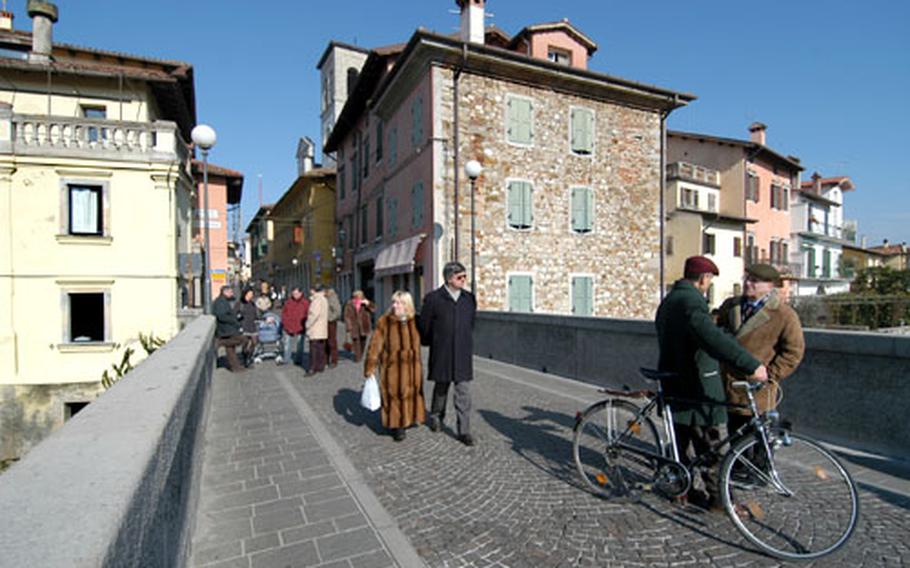 The Ponte del Diavolo, or Devil’s Bridge, is hardly devilish on a beautiful Sunday morning when friends meet for a chat. Much of the old center of town is off limits to cars on Sundays from 9 a.m. to 5 p.m. (Michael Abrams / S&S) 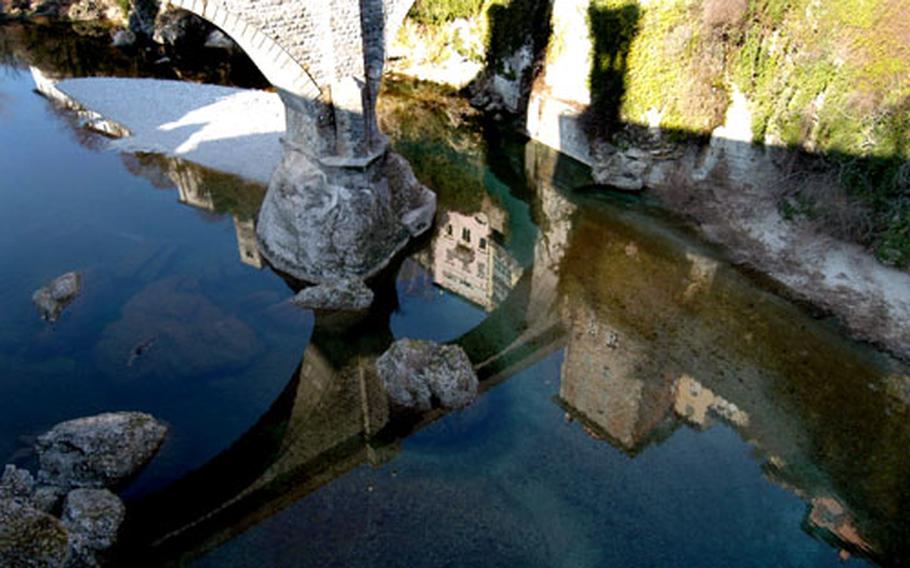 The Natisone river reflects the town of Cividale and its Ponte del Diavolo. The bridge dates to the second half of the 15th century and was rebuilt after 1917. Supported by two impressive arches, it rests on a big stone which, according to legend, was thrown into the water by the devil himself. It is 72 feet above the river and is 165 feet long. (Michael Abrams / S&S)

Cividale was built by Julius Caesar. At least that is what the citizens of this eastern Italian town claim.

It definitely was the Romans who founded the city in 53 B.C. And they picked a nice spot to do it: The town sits on the banks of the Natisone river, with Slovenia&#8217;s Julian Alps visible in the distance.

As it often is in Italy, the church square, or in Cividale&#8217;s case the cathedral square, the Piazza del Duomo, is the heart of the city. It is surrounded on three sides by impressive buildings: the cathedral, the Palazzo dei Provveditori Veneti and the Palazzo Conti de Nordis.

Construction of the cathedral, built in Venetian Gothic style, began in the 15th century and was completed in the 16th century by architect Pietro Lombardo. Housed in the cathedral is the Christian Museum with its two masterpieces of Lombard sculpture, the octagonal Baptistery of Callisto and the altar of Ratchis.

The Palazzo dei Provveditori was designed by famed Italian architect Andrea Palladio in the late 16th century. Inside is the Museo Archeologico Nazionale, the National Archaeological Museum. On display are exhibits from Roman, Byzantine and medieval times, and a large collection of Lombard artifacts including jewelry, weapons and household goods.

Across the street from the cathedral is the Palazzo Comunale, also in Venetian Gothic style. Standing in front of it is a statue of Julius Caesar.

If the square is the heart of Cividale, then the Ponte del Diavolo, the devil&#8217;s bridge, is its soul.

Two graceful arches soar up from the Natisone to support the bridge almost 73 feet above the river. They stand on a rock in the middle of the river that was, according to legend, thrown there by the devil himself. The bridge, 165 feet long, was built in the 15th century and rebuilt after 1917. It has become the symbol of Cividale.

Cross over the bridge for a beautiful view of the bridge and town reflected in the river, with the Julian Alps off in the distance.

On the other side of the river, look for signs pointing to the Ipogeo Celtico, or Celtic hypogeum, a complex of artificial caves, once used as a Roman prison. There are heads engraved on its walls, indicating that it perhaps was once a Celtic graveyard.

Then mosey along Cividale&#8217;s cobblestone lanes, past old churches, across colorful squares and under medieval arches to capture the atmosphere of the city.

Follow the signs to the Tempietto Longobardo (Lombard temple), a small chapel with beautiful stucco and frescos from the eighth century and finely carved and inlaid 15th-century choir stalls. When inside, don&#8217;t forget to look straight up at the paintings on the ceiling above.

Sight-seeing can make one rather hungry and thirsty, and Cividale has plenty of caf&#233;s, bars and restaurants to satisfy these needs and rest weary feet. Likewise, there are shops offering specialties &#8212; wine, sausages, spirits &#8212; of the region known as Friuli.

Which brings us back to Julius Caesar. When it was founded, Cividale was called Forum Iulii, hence the name of this fertile patch of Italy &#8212; Friuli.

When: Anytime, but if you are not interested in shopping, Sunday is a good day to visit, as cars are banned from the old town center.