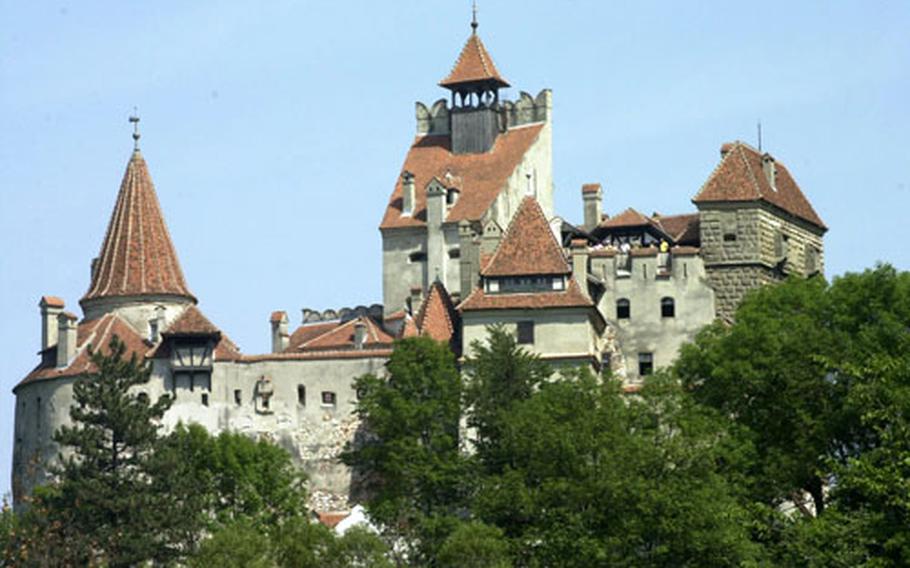 A view of Bran Castle in Romania. The castle is widely known as Dracula's Castle. But the truth is that nobody knows whether Vlad (The Impaler) Tepes, also known as Dracula, spent a night in the massive castle. Still, tourists come by the thousands. (Scott Schonauer/Stars and Stripes)

A view of Bran Castle in Romania. The castle is widely known as Dracula's Castle. But the truth is that nobody knows whether Vlad (The Impaler) Tepes, also known as Dracula, spent a night in the massive castle. Still, tourists come by the thousands. (Scott Schonauer/Stars and Stripes) 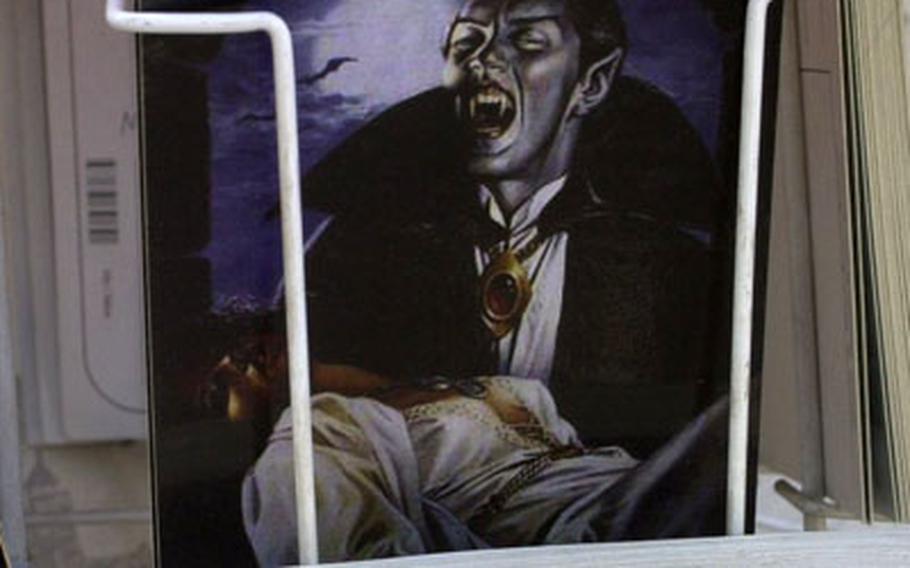 A postcard from Dracula's Castle? Numerous vendors in Romania have taken advantage of lore that claims that Vlad (The Impaler) Tepes, also known as Dracula, stayed here. (Scott Schonauer/Stars and Stripes) 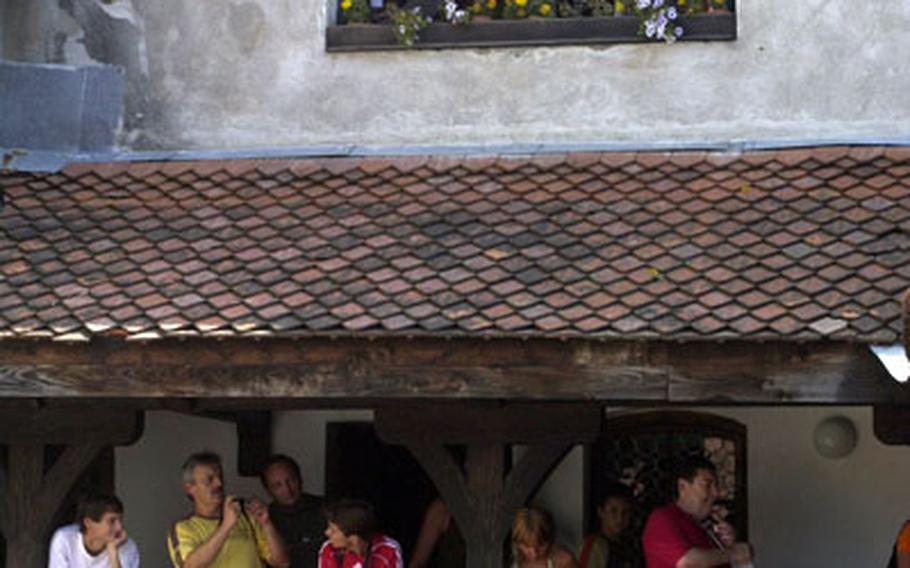 Tourists overlook the courtyard in Bran Castle in Romania. (Scott Schonauer/Stars and Stripes) 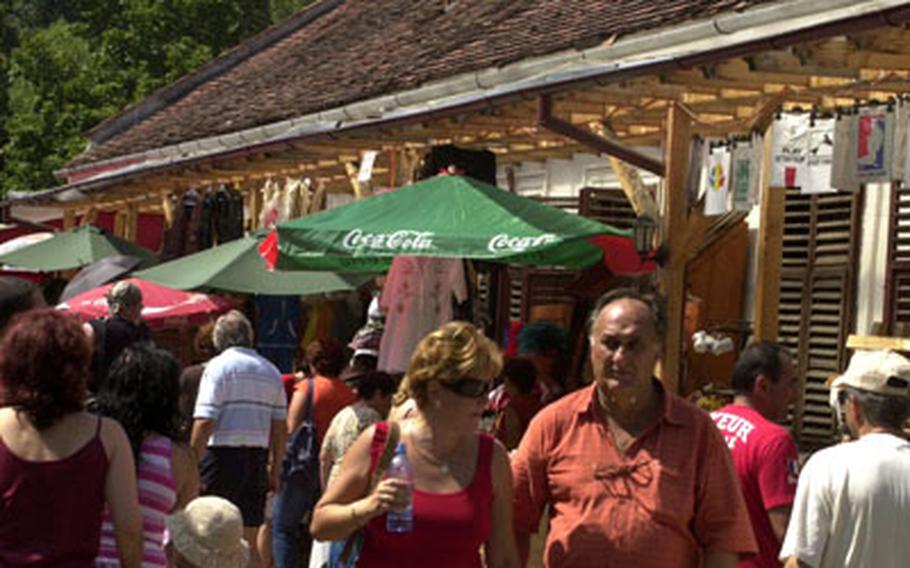 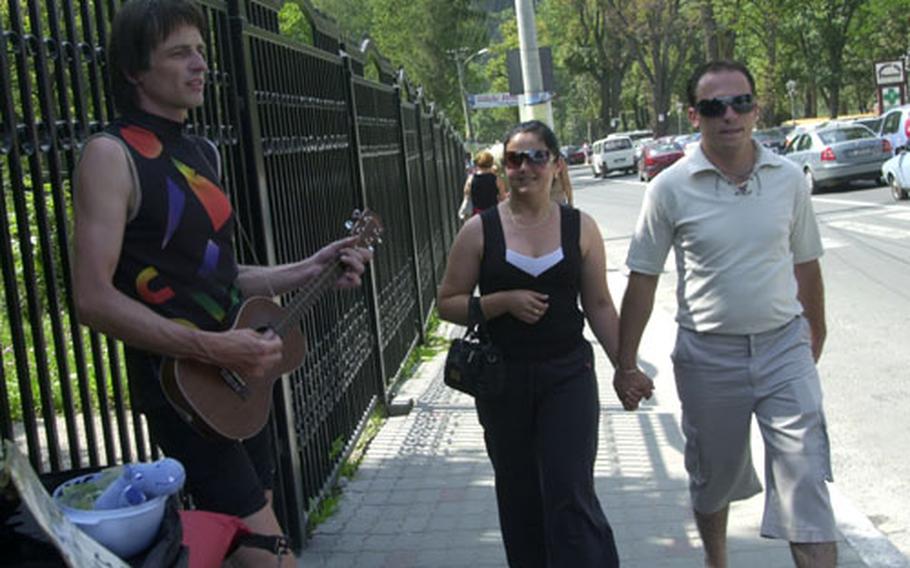 Now here's something scary: Jens Jemand, a street performer who traveled through Transylvania by bike, strums his guitar outside Bran Castle. Jemand, wearing a spandex suit, said Romanians have a bad reputation as thieving gypsies. "But they are some of the nicest and most honest people I have ever met." (Scott Schonauer/Stars and Stripes)

They come by car, train or bus from all over the world to the small village of Bran, tucked in the Carpathian Mountains of Transylvania.

Tens of thousands of tourists stop here every year for the same reason: to see Dracula&rsquo;s castle. It&rsquo;s practically a requirement when visiting Romania &mdash; much as the Eiffel Tower is for those who go to Paris for the first time or the Colosseum is for those new to Rome. Vampire-hunting visitors climb the hill to see the castle so that when they return home they can tell friends, &ldquo;I saw Dracula&rsquo;s Castle.&rdquo; Been there, saw that.

What these tourists think is Dracula&rsquo;s Castle really isn&rsquo;t &mdash; depending on whom you talk to or how you look at it. There is no proof Vlad &ldquo;The Impaler&rdquo; Tepes &mdash; also known as Vlad Dracula and the person upon whom the fictional character Dracula is based &mdash; ever ruled from the castle. It&rsquo;s just a myth perpetuated by tour guides and souvenir sellers who make their living off the legend. They believe the longer the tale grows, the more people will come.

And they do. Nearly a half-million people visit the castle annually, especially Americans during Halloween.

But a large percentage of the people who stop here don&rsquo;t know that it&rsquo;s not really Dracula&rsquo;s castle. Take, for example, the man who walked into the Bran tourist information office this summer. When he heard the truth, he had a look on his face as if he had just been swindled. It was an expression of disappointment and disbelief, like a child who made the trip to the North Pole and found no Santa Claus.

The man still planned to pay the fee and traverse the steep hill up to the castle, but the phony story made him wonder.

Sighisoara is the birthplace of bad Vlad, but the &ldquo;real&rdquo; Dracula castle is far west of Bran near the Arges River &mdash; fewer than 300 miles from the capital of Bucharest. His real palace pad is at the Poenari Citadel. It is a popular tourist spot, but the building is now in ruins. It&rsquo;s not nearly as majestic as the castle in Bran.

There is a loose connection between Dracula&rsquo;s castle and the man who would serve as the basis of the Dracula character. Vlad ruled the Wallachia region in the middle of the 15th century. He had a thirst for blood: His affinity for torture and gruesome executions are part of Romanian folklore.

He earned the &ldquo;impaler&rdquo; moniker for the way he killed his victims. The story goes that he would impale his enemies on dull stakes, leading to a slow and painful death. Legend has it that he sometimes drank their blood and lunched near his impaled victims. (That is the very abbreviated and tame version of his atrocities.)

There is no evidence he stayed at the castle, but Bran Castle Museum&rsquo;s Web site states the King of Hungary in 1462 imprisoned Vlad at Bran Castle for two months.

How much author Bram Stoker based his vampire character on Vlad is uncertain. According to the museum, Stoker never set foot in the castle or in Transylvania and used maps from a library in England for the book&rsquo;s setting.

The weak link has not shaken the castle&rsquo;s connection to either the Wallachian ruler or the story of Dracula. On Romania&rsquo;s national tourist Web site, there is little information to dispute the relationship. Souvenir shops selling all things Dracula line the walk up to the bottom of the hill leading to the castle&rsquo;s main gate.

While the castle might be just a prop in the Dracula legend, it is still worth a visit when in the country.

But on a bright sunny day in August, the castle is hardly scary. It is more fitting as the backdrop of a children&rsquo;s fairy tale than a blood- gushing horror story. About the only creepy thing at the castle was a pasty German in a spandex outfit singing and strumming his small guitar for money.

And Halloween is still a great time to go to soak up the spooky atmosphere. Tour packages tout Halloween trips to Dracula&rsquo;s castle, and the town offers a big festival to entertain the international masses, most of whom are American or British.

If you do go, check out the castle&rsquo;s beautiful courtyard, the secret corridors and the wonderful vistas the top floors offer for those who make the climb.

Just don&rsquo;t tell people you walked the same halls as a vampire. Of course, if you did, that makes it a much better story.

Find more information about Bran Castle and other Transylvanian favorites at: