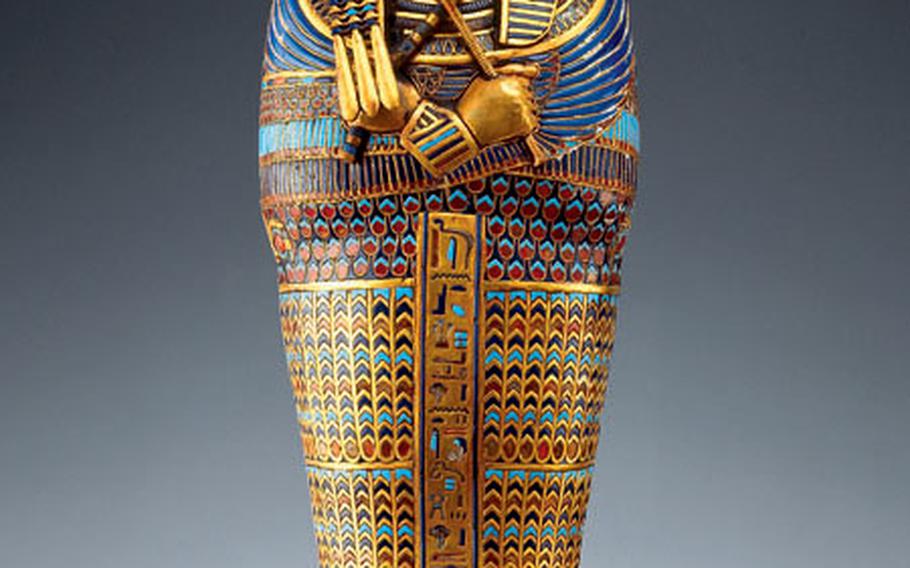 Made of gold, carnelian, rock crystal, obsidian and glass, this highly detailed miniature mummy coffinette with mask is one of four that held Tutankhamen’s embalmed organs. It had originally been made for Queen Neferneferuaten. (Photos Courtesy of Kunst- und Ausstellungshalle)

Made of gold, carnelian, rock crystal, obsidian and glass, this highly detailed miniature mummy coffinette with mask is one of four that held Tutankhamen’s embalmed organs. It had originally been made for Queen Neferneferuaten. (Photos Courtesy of Kunst- und Ausstellungshalle) This chest, probably used to store small objects, was found in the tomb of Yuya and Tuya, the in-laws of Amentohep III, who had married their daughter, Tiy. Made of wood, ivory, ebony and faience, the box’s symbolic artwork expresses wishes of long life and prosperity. () The largest scene in Tutankhamen’s pectoral, or jewelry that hung over the chest, shows the pharaoh standing between the seated Memphite deity couple Sekhmet, left, and Ptah. () 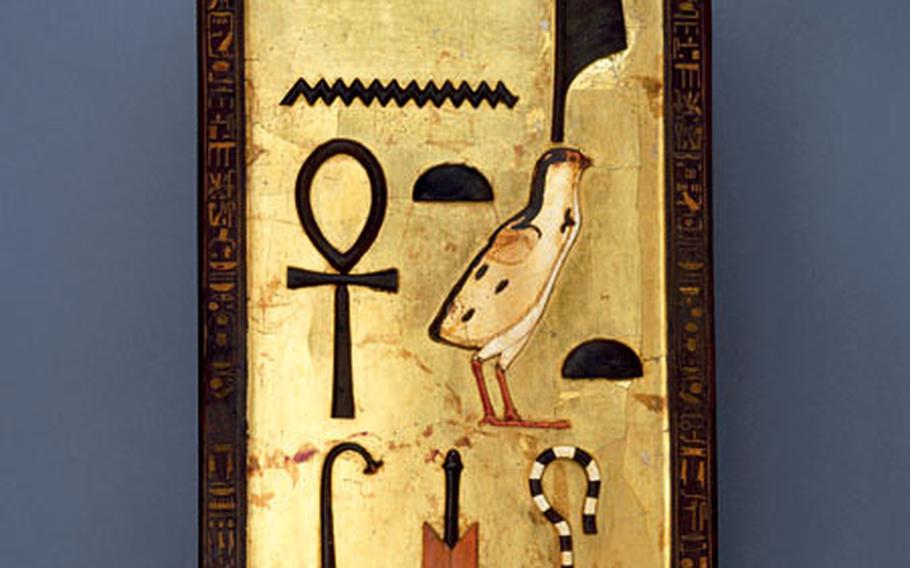 The lid of a box found in King Tut’s tomb contained jewelry, a mirror case and royal insignia. ()

Ancient Egyptians believed that the preservation of a person&#8217;s name in funerary texts was essential for his or her survival in the afterlife. If that&#8217;s the case, King Tutankhamen &#8212; better known as &#8220;King Tut&#8221; &#8212; can rest easily, thanks to all the advertising about an exhibition bearing his name in Bonn, Germany.

Fifty funerary pieces in &#8220;Tutankhamen &#8212; The Golden Beyond; Tomb Treasures from the Valley of the Kings&#8221; are on display through May 1 in the city&#8217;s Kunst und Ausstellungshalle der Bundesrepublik Deutschland. The exhibition also includes 70 pieces from other temples and tombs of the 18th Dynasty (about 1550 to 1308 B.C.), considered by experts to be the high point of advanced ancient Egyptian civilization.

Aside from his treasures, little is known of this pharaoh. Probably taking the throne as a child and living only to 17 or 18 years, his major claim to fame was reinstalling the worship of the country&#8217;s gods and goddesses after his predecessor (and possible father) Akhenaten had briefly introduced the concept of one god, the sun god, Aten. It was only after the discovery of Tut&#8217;s tomb in 1922 by archaeologist Howard Carter, and its preserved funerary pieces &#8212; 5,000 objects in four chambers &#8212; that his name became widespread in the modern world.

The Kunsthalle exhibit represents only a small portion of the tomb&#8217;s holdings. But its limited size allows you a two-hour immersion into the royal life of ancient Egypt.

Each of the 120 pieces &#8212; shabtibs (funerary figures), busts, coffins, jewelry, weapons, statuettes, musical instruments, reliefs, furniture and other common royal household goods &#8212; is set up in its own case, most of which allow you to study the specimens from all sides. Much of the color is so fresh &#8212; turquoise, blues, oranges and greens &#8212; it&#8217;s difficult to imagine the pieces are thousands of years old.

The case descriptions, as well as historical notes on the walls, are in both German and English.

In addition, you can rent audio guides with numbered recordings in English for more information and stories about ancient life. And it&#8217;s these background details, with explanations of the highly symbolic art and motifs of the complex society, that breathe life into the pieces, creating a bridge between the ancients&#8217; mentality and our own.

For these Egyptians, death was not the end of existence but merely an interruption. Eternal life could be guaranteed by revering the gods, mummification and the proper statues and statuettes and other funeral accompaniments in the tomb. It was crucial to preserve and protect the physical body so that the Ka, Ba and Akhu (parts of the Egyptian &#8220;soul&#8221;) could recognize and be rejoined with that body in the afterlife.

Something as simple as the wooden, resin-blackened panther, for example, was an important statue with its own mission. Believed to have originally belonged to a group of other funerary figures, it probably represents the goddess Mafdet, who accompanied the king to his afterlife, protecting him from any dangerous snakes and scorpions that lay in their way.

Good coffins with the proper inscriptions were essential, since it was believed they protected the body from deterioration or mutilation.

One of the larger pieces in the exhibit is the mummy-shaped wooden outer coffin of Tuya, the mother-in-law of King Amenophis III, discovered in another tomb. This elaborate coffin, a little more than 7 feet long and about 3 feet deep when lying flat, is entirely gilded in brilliant Egyptian gold leaf. Its head &#8212; an important section as it provided the person with a face in the afterlife and allowed the spirits to recognize the body &#8212; is stylized with the typical wig and black-lined eyes. The coffin body is inscribed with a multitude of symbolic deity figures and funerary inscriptions to guide the body into the afterlife.

As well as body protection, the king needed his &#8220;household goods,&#8221; many of which show Egyptian art&#8217;s influence on contemporary design. For instance, Tutankhamen&#8217;s pectoral &#8212; jewelry that hung over the chest &#8212; depicts detailed scenes of the pharaoh with the gods and represents their relationships. Many of these gods&#8217; figures are in vogue today, such as the lion- headed Sekhtmet, the winged goddess Maat, cobras, the Horus falcon and the jackal-headed Anubis.

Also interesting to study are blown-up photos of Carter&#8217;s 1922 tomb discoveries hung on the walls. Their life size gives you the opportunity to stand in his team&#8217;s shoes and glimpse the find as it was uncovered, last seen by people who lived thousands of years ago.

The exhibition includes a computer-animated film on the tomb architecture in the Old and New Kingdoms, focusing on the 18th Dynasty. English translations are available on rental tapes.

There is some discussion on whether the exhibit will go to the United States or back to Egypt after its rare overseas appearance. So to be safe, go now to see this fascinating display of ancient Egyptian royal life.

Jayne Traendly is a freelance writer living in Germany.

The King Tutankhamen exhibition is very popular. On busy days, especially weekends, admission is timed. Visitors might want to consider buying advance tickets with reserved date and time online at www.kunsthalle-bonn.de (in English and German). Admission is 14 euros for adults, 9 euros for children and 19 euros for a family of two adults and one child. This includes admission to the other exhibits in the museum. The museum houses a cafe, restaurant and gift shop.

The Kunst-und Ausstellungshalle der Bundesrepublik Deutschland is on the Museumsmeile in Bonn at Friedrich-Ebert- Allee 4. The Web site includes a map with directions. The museum is open 10 a.m. to 7 p.m. Mondays and 10 a.m. to 9 p.m. Tuesday through Sunday.