Screens of all sizes flash footage of the preparations for and execution of Operation Overlord at the new visitor center at the Normandy American Cemetery. Free-standing displays tell the stories of the various parts of the invasion in both English and French. (Matt Millham / S&S)

Screens of all sizes flash footage of the preparations for and execution of Operation Overlord at the new visitor center at the Normandy American Cemetery. Free-standing displays tell the stories of the various parts of the invasion in both English and French. (Matt Millham / S&S) 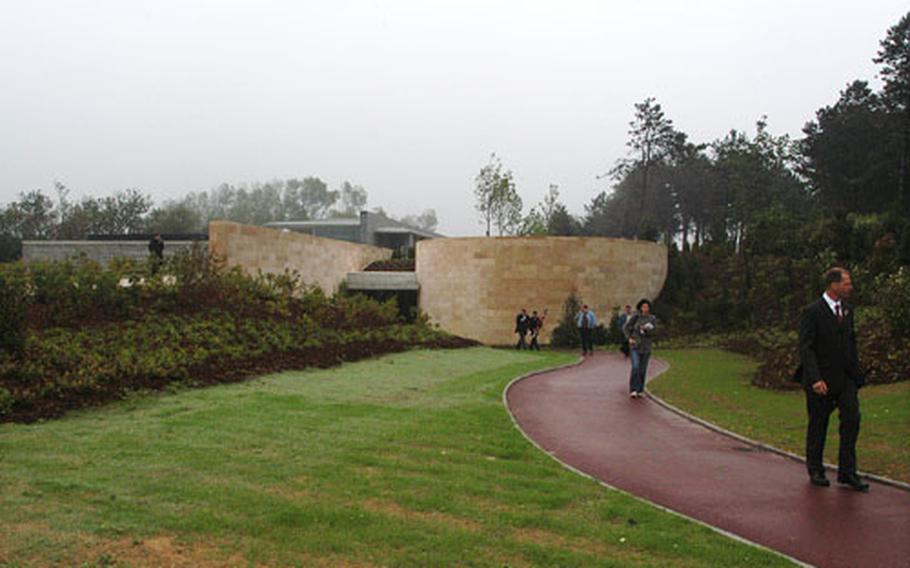 A view toward the exit of the new visitor center at the Normandy American Cemetery. The center, which opened in May, overlooks Omaha Beach, one of two beaches taken by U.S. forces in the Normandy invasion. (Matt Millham / S&S) Rows of free-standing displays at the Normandy American Cemetery&#39;s new visitor center encapsulate anecdotes, equipment, maps and memorabilia that visitors can walk among as they learn some of the personal stories of troops who participated in the Allied invasion of Normandy. (Matt Millham / S&S) Grave markers at the Normandy American Cemetery, where 9,387 U.S. troops killed in the Allied invasion of Normandy are buried, were decorated with U.S. and French flags for the 63rd anniversary of D-Day. (Matt Millham / Stars and Stripes)

War, for some reason, has an almost unmatched ability to increase a region&#8217;s marketability as a vacation destination.

After the hostilities are done, developers turn epic battle sites into tourist destinations, relating the stories of heroism and gore to the folks who were there and their descendents. Gettysburg, Bunker Hill and Antietam, for example, each saw their share of carnage, and each draws hundreds of thousands of visitors annually &#8212; or at least that&#8217;s what their tourist Web sites claim.

But as gruesome as those battles were, they aren&#8217;t as fresh in the American memory as D-Day.

Morbid as the following statistic sounds, it says a lot about our post-World War II war obsession: the Normandy American Cemetery, final resting place of 9,387 American war dead from one of the greatest battles of World War II, gets about 1 million visitors every year.

A lot of those are Americans. They spend thousands of dollars to travel across an ocean to look at its stark field of grave markers, visit their fallen countrymen and wonder at the heroics and tragedies of Operation Overlord, the imposing name given to the mission that earned the Allies a foothold in Nazi-occupied Europe.

Around the anniversary of the D-Day invasion, visitors to the site are hardly limited to Americans. Every year, re-enactors and plain-clothes civilians from France, Belgium, the Netherlands, Britain and elsewhere also flood into the region to pay homage. For them, the jaunt to Normandy is a relatively inexpensive proposition. But for Americans, this historical trip can cost much more than the price of airfare, food and lodging &#8212; at least for those who want to see some of the relics and hear the stories of that battle in the place it happened.

A slew of museums line D-514, the road that runs roughly parallel to the Normandy landing beaches, but each one tells just a fraction of the story and entry costs anywhere from 3 euros to 9 euros a pop. To hit all of them takes days, patience and, not least of all, a comfortable pair of walking shoes.

So, thank goodness for the American Battle Monuments Commission.

In May, the commission opened the Normandy American Cemetery Visitor Center, which sits just a few hundred yards from the nearest American grave marker. The center, like the cemetery, doesn&#8217;t sell the story of America&#8217;s war heroes back to them; the exhibit is free.

Overlooking Omaha Beach and the English Channel, the center, open 9 a.m. to 6 p.m. daily, is like a brick-and-mortar History Channel documentary of the U.S. role in the greatest amphibious assault in recorded history.

The building itself elicits the feeling of the battle. A jutting roof and gray stone walls bring to mind the bunkers rotting on the beach below. A reflecting pool stretches out toward the channel and appears to extend that body&#8217;s chilly waters right up to the building&#8217;s edge. Walls of white granite flecked with rust-colored garnet suggest the blood spilled on the sands below.

But as impressive as the building is from the outside and its views are from the first floor, it&#8217;s in the basement where the history is told.

Most of the building&#8217;s 30,000 square feet are concealed below ground, and its subterranean depths offer up a multi-media extravaganza that, despite its volumes of information, doesn&#8217;t overwhelm.

Black slabs that jut up from the floor tell the story of the invasion &#8212; not just the gutsy battle, but also the months of training, planning and subterfuge that went into making it a success.

Footage from old movie reels flickers on walls, casting Gen. Dwight D. Eisenhower, commander of the expeditionary force, and lesser privates and sergeants in the same two-dimensional black and white, bigger than life. A weathered rifle and boots, a first-aid kit and a machete, old books and matches in usable condition rest in glass cases, reminding visitors that the war wasn&#8217;t so long ago.

The center, though, isn&#8217;t the main attraction here; the cemetery is. Still, it&#8217;s best to browse the exhibit and hear the stories before visiting the cemetery to get a better understanding of what those thousands of American war dead endured and how they came to rest there.

Four trains run daily between Paris&#8217; St. Lazare station and Bayeux, Normandy, the nearest train station to the Normandy American Visitor Center. The trip is about 2&#189; hours. From Bayeux, taxis are available to reach the memorial.

For more information, go to www.abmc.gov/nvc/index.php.