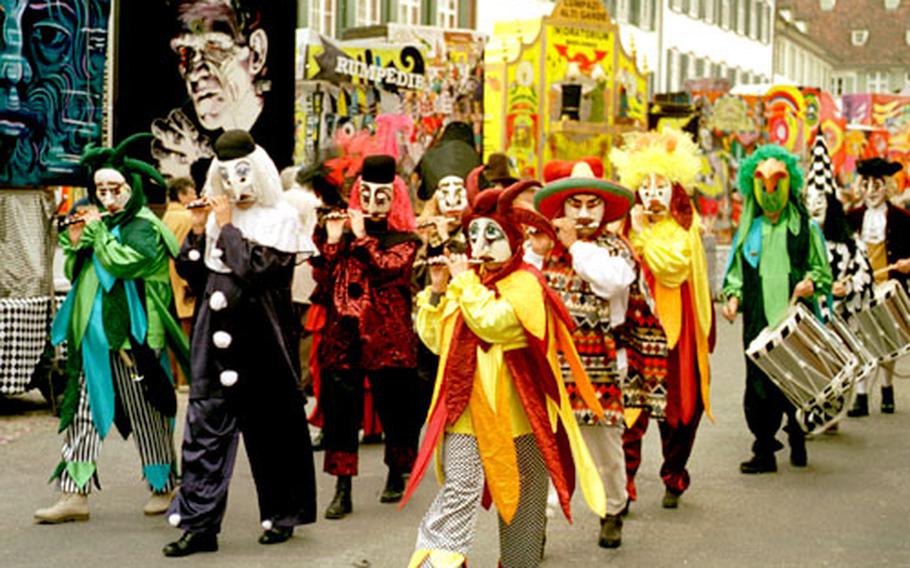 A local clique, or Fasnacht band, marches in front of the artistic lanterns at the Münster- platz in Basel, Switzerland. (Peter Jaeger / S&S)

A local clique, or Fasnacht band, marches in front of the artistic lanterns at the Münster- platz in Basel, Switzerland. (Peter Jaeger / S&S) 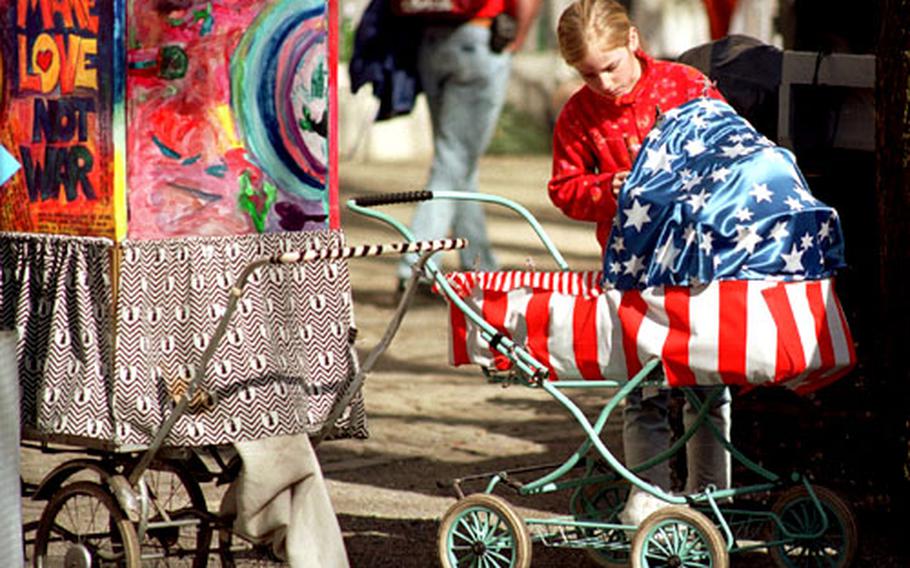 Both love for the United States and criticism of the U.S-led war in Iraq combine in one image during last year’s Fasnacht celebration at the Münsterplatz. (Peter Jaeger / S&S) 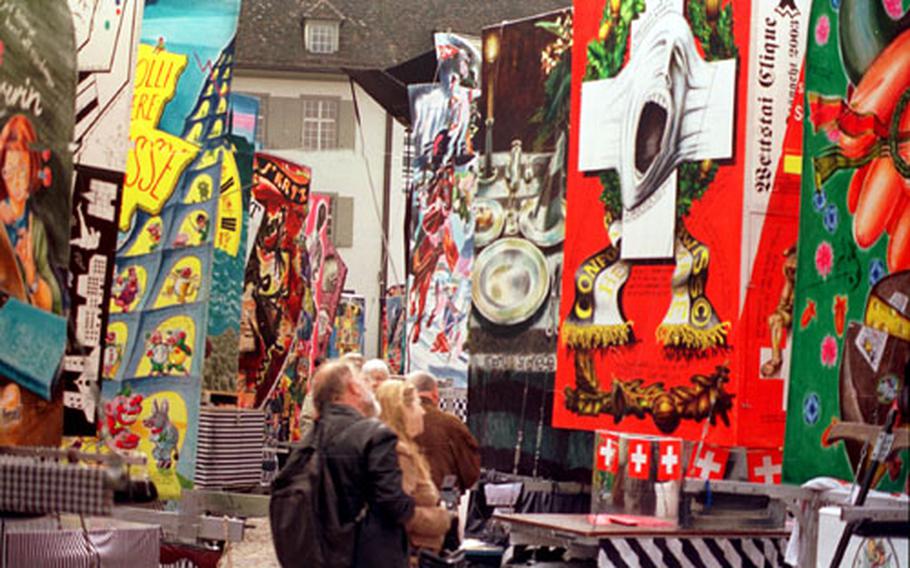 Lanterns used during the Morgenstraich were lined up for the public to inspect and enjoy on the Münsterplatz at noon after last year&#39;s parade. (Peter Jaeger / S&S)

A highlight of Basel each year is the city&#8217;s Carnival celebrations, known as Fasnacht.

It is 72 hours of fun that starts on the Monday following Ash Wednesday (March 1 this year), and ends in the wee hours of Thursday morning.

It all begins with what is known as the Morgenstraich. At exactly 4 a.m., all the lights in the city center go off. Out of the pitch darkness, the sound of drums and piccolos waft through the cold night air. The sound grows, as a faint light glowing in the distance becomes stronger.

Suddenly, the musicians of the city&#8217;s Fasnacht cliques, or clubs, are coming from all directions. Each musician wears a mask, some with small lamps on their heads. They carry painted lanterns that make fun of things that have happened during the past year.

For hours the eerie procession criss-crosses the old town playing their strange melodies. At dawn it is over.

Participants and spectators alike wander into caf&#233;s and restaurants for drinks and food, including the traditional fare of Basel Fasnacht: Mehlsuppe, a thick soup of flour; K&#228;sew&#228;hen, or cheese cakes; and Zwiebelw&#228;hen, onion cakes.

At 1:30 in the afternoon, the musicians start again, joined by brass bands known as Guggemuusiger and floats. More than 10,000 participants parade through the crowd-lined streets. It&#8217;s a more joyous, boisterous celebration now, with confetti, oranges and mimosas flying through the air. The parade is repeated Wednesday afternoon at the same time.

Monday and Wednesday night features the so-called Schnitzelbank groups singing in 60 of the city&#8217;s taverns. In the local dialect known as Baseldeutch, they sing verses that end in a joke. Unfortunately, if you can&#8217;t understand the dialect, you won&#8217;t get the joke.

The Guggemuusiger make a comeback on Tuesday night, playing their loud, out-of-key brass songs on the Marktplatz, Barf&#252;sserplatz and Claraplatz starting at 8 p.m.

Visitors might not understand the local language or the satirical one-liners on the parade floats, but they can still join the fun. To help them out, here is a glossary of carnival terms put together by Andrew Cowin, a resident of Heidelberg, Germany, who has attended Fasnacht for the past dozen years.

&#182; Charivari: Dress as you like: During the Morgenstraich, marchers can wear any costume, while in afternoon processions they wear the &#8220;uniform&#8221; of the club or clique that they belong to. After the big marches, performers wander about the Old City playing their instruments &#8212; perhaps the best opportunity for photographers to get memorable snaps.

&#182; Guggemuusiger: Enthusiastic blarers on shattered brass instruments that first appear at the Monday afternoon procession. Frankly, an awful noise, but the uniform costumes and satirical lanterns and banners make a colorful spectacle.

&#182; Waggis: Masked figures who ride in floats on the Monday and Wednesday afternoon parades. Can be very nice to kids (candy, flowers, fruit) but definitely vindictive to adults.

&#182; Blagette: Badge that serves as unofficial entry fee to Fasnacht festivities. Buy one or the Waggis may turn nasty. They come in bronze, silver or gold, the former being the cheapest at about 10 Swiss francs each. A nice souvenir of your visit.

&#182; Zeedel: Strips of paper with long satirical poems in Swiss dialect that only people from Basel could possibly understand. Handed out during the afternoon processions.