Baden-Baden: Novice bathers learn to beat the chill at baths 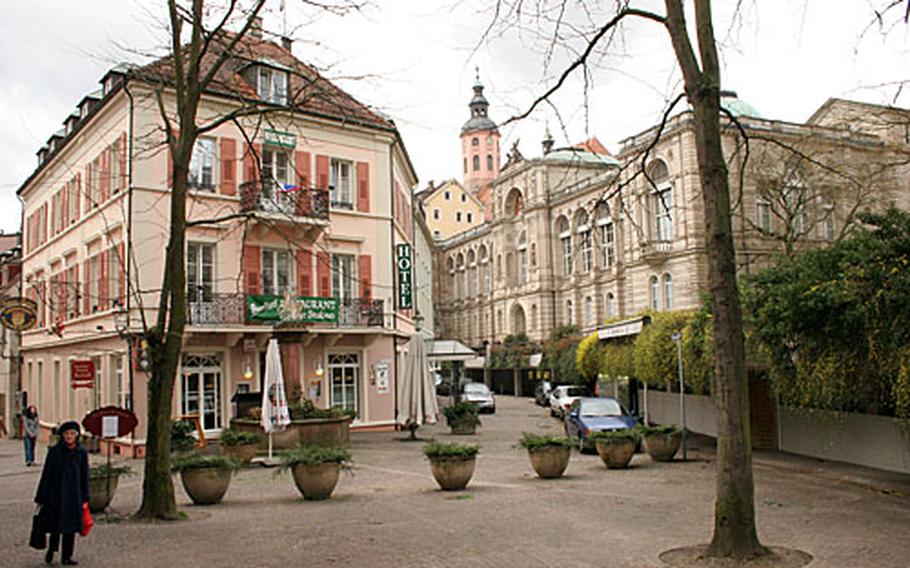 The Friedrichsbad, at right, is the heart of Baden-Baden&#39;s bath quarter, which also includes some elegant hotels and restaurant inside attractive, well-maintained buildings. (Chris Gray / Special to S&S)

The Friedrichsbad, at right, is the heart of Baden-Baden&#39;s bath quarter, which also includes some elegant hotels and restaurant inside attractive, well-maintained buildings. (Chris Gray / Special to S&S) The temperature inside Baden-Baden&#39;s Roman public baths was governed by the amount of space between the elevated floor, visible in this photo and the ground. (Chris Gray / Special to S&S) 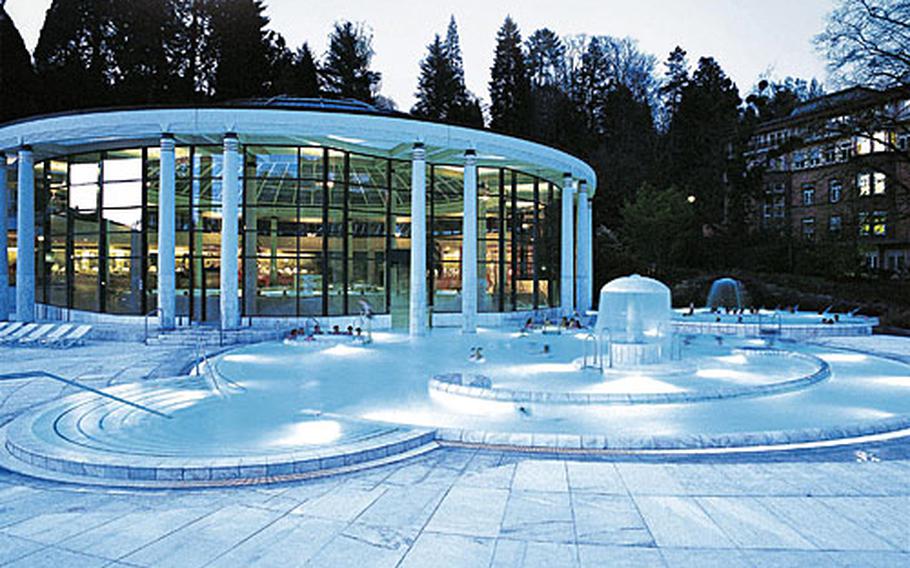 Winter was getting old. True, the weather in Germany has been unseasonably mild, but certainly not balmy. And then there&rsquo;s the rain.

I began daydreaming of warm beaches, but neither my girlfriend nor I had the vacation time or cash for that. Then I remembered there was an easier escape nearby: the elegant spa town of Baden-Baden.

Since Roman times, people have gone to Baden-Baden to soak in the thermal water gushing from springs beneath the surrounding hills. Emperor Caracalla eased his rheumatism there in private baths, and soldiers enjoyed the spa&rsquo;s public baths, the remains of which you can still see, at the renowned Roman-Irish Friedrichsbad.

When the Friedrichsbad opened in 1877, it was Europe&rsquo;s most modern &mdash; and stylish &mdash; bathhouse. That&rsquo;s according to its brochure, at least, which had me sold with its quote from Mark Twain: &ldquo;Here at the Friedrichsbad, you lose track of time within 10 minutes and track of the world within 20.&rdquo;

So, I surfed over to www. baden-baden.de and found the Fit Through the Winter package: two nights of lodging in a Baden- Baden hotel, dinner for two and tickets to the Friedrichsbad for a total of 238 euros. A weekend getaway at a world-class spa for $300? Done.

Yet even with the trip booked, I felt uneasy. For one, Baden- Baden is a rich folks&rsquo; town, and we&rsquo;re not exactly rich. Then there was the dress code at the Friedrichsbad: buck naked.

We left Heidelberg reassured on the first point by Rick Steves&rsquo; take on Baden- Baden, from his &ldquo;Germany & Austria&rdquo; guidebook, that &ldquo;of all the high-class resort towns I&rsquo;ve seen, Baden-Baden is the easiest to enjoy in jeans.&rdquo; Ambling later that evening through Baden-Baden&rsquo;s quiet bath quarter, a classy but laid- back atmosphere is exactly what we found.

We settled in for dinner at Hirsch&rsquo;s Brasserie, a smart two-level place in rich wood paneling and art noveau d&eacute;cor. At the bar, Baden-Baden&rsquo;s well-heeled playboys gleefully chugged beer and broke into song. Nothing highbrow about that.

But going the full monty? Browsing the menu, I pictured myself swimming in the buff with a little more jiggle in my belly and debated: Do I really need a schnitzel with fries? Wouldn&rsquo;t that salad with avocado balsamic dressing be nice? (It was.)

We were still fretting about it the next morning, so we decided to do it as you remove a band-aid: Take a deep breath and rip it off. And I am very glad we did.

Because Mark Twain was right: I have never felt so relaxed as I did after a few hours at the Friedrichsbad.

Not that things went smoothly. As it turns out, there is one thing you are allowed to wear inside the Friedrichsbad, and that&rsquo;s glasses. If you normally wear them, you&rsquo;ll need them. You proceed through the Friedrichsbad&rsquo;s 16 stages of pools, showers and saunas following a timed and coordinated plan. Men and women use separate and similar facilities, but on mixed days (weekends are always mixed) meet up in a series of pools in the center.

Without my glasses, it wasn&rsquo;t until I&rsquo;d mistakenly skipped a few stages that I noticed the signs posted in each room to keep you on time and on course. Having endured my soap and brush massage (8 euros extra, rough stuff but worth every cent) two stages too soon, I hurried through the hot-air baths and wound up in the sauna with a towel I wasn&rsquo;t supposed to have.

I was relieved to meet my girlfriend afterward in the mixed area, where we drifted from hot pools to warm ones with jets, to a cool round pool under an elegant dome. If things were going to get weird, this would have been the time. Maybe it was because without my glasses I couldn&rsquo;t discern gender from outside 10 yards; or maybe it was because we were surrounded by copies of classical nudes like the &ldquo;David,&rdquo; I don&rsquo;t know &mdash; but being around all those naked people wasn&rsquo;t a big deal. Really.

Nobody stared (not that any of us were about to be crowned Mr. or Miss Universe), and apart from the French couple making out in the hot pool, no one got kinky. Strangely enough, being naked felt almost &mdash; dare I say it? &mdash; natural.

After the mixed pools, you take a luxuriously long, hot shower followed by a plunge into a pool of freezing water (sounds awful, but it&rsquo;s exhilarating). And finally, after you&rsquo;ve slathered on scented lotion in the cr&egrave;me room, you take a little nap. It should have been a soothing end to a pleasant day, but I managed to botch this, too.

Following the signs from the cr&egrave;me room to the quiet room, I tiptoed in through an unattended door. I found a free bed and slid under the blanket onto its soft plastic mattress. My well-moisturized skin stuck to it instantly. This was the womblike experience Rick Steves had raved about?

Not exactly. I watched with envy as an attendant led two newcomers to their beds, laid fresh sheets over their blankets, then folded them up snugly inside. Lesson: Wait at the door for the attendant.

Mistakes aside, we enjoyed the Friedrichsbad so much that the next morning we stopped by its more modern (and modest) neighbor, the Caracalla Spa.

The concept is the same: Buy your ticket, change and lock up your stuff and go relax. But you explore Caracalla&rsquo;s pools and saunas at your own pace &mdash; and you wear a bathing suit.

Caracalla, like the Friedrichsbad, is filled from the same springs that had warmed Caracalla himself. That was a nice thing to think about while soaking in one of the outdoor hot tubs, watching steam rise off the adjoining pools into the cold January air: You don&rsquo;t need to be Caracalla to live like an emperor.

Maybe winter wasn&rsquo;t so bad, after all.

Chris Gray is a freelance writer living in Heidelberg, Germany. Write him at cmgray80@yahoo.com.

Getting there&bull; By car: From central Germany drive south on Autobahn 5 to Exit 51. Turn left onto B500 and follow signs for Baden-Baden and then Centrum. In Baden- Baden, follow signs for Therme (don&rsquo;t worry when that takes you all the way out of town, up the mountain and through a tunnel &mdash; you&rsquo;re almost there).

&bull; By rail: Most trains to Baden-Baden connect in Karlsruhe. Baden-Baden&rsquo;s train station is just outside town, bus No. 201 goes from there to the center in about 15 minutes. Details at www.bahn.de.

&bull; Friedrichsbad: 21 euros for up to three hours, 29 euros with soap and brush massage (and an extra half-hour).

&bull; Caracalla: 13 euros for two hours, 15 euros for three, 17 euros for four. We paid for two hours at Caracalla and didn&rsquo;t have enough time for everything there, so for your first time, three hours is better.

&bull; Friedrichsbad: 9 a.m. to 10 p.m. daily (last admission two hours before closing). Every day except Monday and Thursday is mixed.

More information: See the Winter Specials advertisement on the Baden- Baden Web site, www.baden-baden.de/en/index.html, for information on booking the Fit Through the Winter package, on sale through March 31. Click on &ldquo;More,&rdquo; then select your hotel package from the list offered. We chose Hotel am Friedrichsbad at Gernsbacher Strasse 31 (just steps from the Friedrichsbad). To learn more about the hotel, see www.hotel-am-friedrichsbad.de., call (+49) (0) 7221-39- 63-40 or e-mail info@hotel-am-friedrichsbad.de. For information on individual bathhouses, see www.carasana.de/home/en/index.html or www.bad-bad.de/thermen/friedbad.htm.