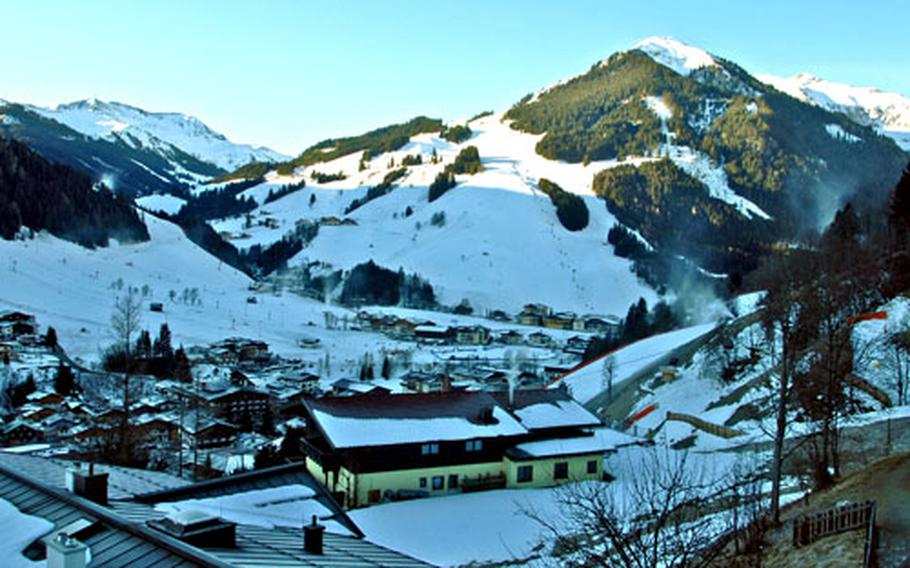 There was plenty of snow in late February at Saalbach Hinterglemm. But to get to good skiing you had to go higher up the slopes. (Seth Robson / S&S)

There was plenty of snow in late February at Saalbach Hinterglemm. But to get to good skiing you had to go higher up the slopes. (Seth Robson / S&S) 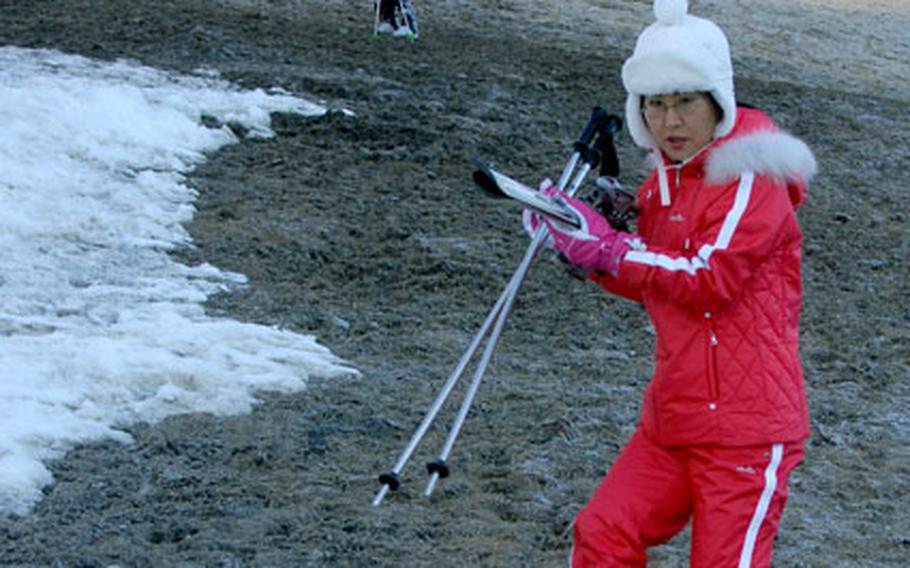 Grafenwöhr skiers Incha Robson, front, and Chris Koslosky carry their skis as they attempt to reach the snow via a muddy traverse at Saalbach Hinterglemm. (Seth Robson / S&S) Entertainment at the Sportalm restaurant includes a felt-capped man who serenades young couples on his accordion or his alphorn. (Seth Robson / S&S)

Contrary to popular belief, the 2006-2007 European ski season is not over.

It is true that high temperatures in the European Alps have melted much of the snow that normally covers some of the best pistes at this time of year. And a lack of snow at Oberammergau, Germany, resulted in cancellation of this month&#8217;s Jeep 2007 U.S. Forces Europe Ski and Snowboard Championship.

But there is still plenty of good skiing available for those willing to travel, according to Bavarian Ski Club member Chris Lawton, who is planning a trip to S&#246;lden, Austria, from March 16 to 19.

A couple of weeks ago, club members traveled to Saalbach Hinterglemm, Austria, and found plenty of snow on the vast ski area&#8217;s upper slopes.

Locals there readily acknowledge that this season will not go down as a good one for skiing. Most of the lower slopes at Saalbach are covered in mud rather than snow, and the snow-makers have been running hot to keep trails to the bottom of lifts open.

In a normal year you can ski out your door from the Bachbauernhof, a large guest house perched several hundred feet above the valley floor, and onto the lifts. This season, a skier&#8217;s day starts with a traverse through the mud to get to a thin passage of snow leading to the Reiterkoglbahn, a gondola ascending to the Sportalm restaurant, with panoramic views of the surrounding Alps.

The Sportalm is a good base for families staying on the east side of the ski area since it is close to several easy and medium difficulty slopes. The downside includes slushy afternoon snow and crowds on the nearest lift &#8212; the Hasenauerkopf, a chairlift that drops skiers off at 5,900 feet.

From the top of the Hasernauerkopf, you can head south to find less- crowded slopes. But these runs suffer from overexposure to the sun, making for a long slushy traverse to an area with jumps for skiers and snowboarders that takes half the day to reach on skis.

A better option is to head north to access the west side of the valley via the steepest gondola on the mountain, the Zwolferkogel Nordbahn. The gondola rises to one of the highest points on the ski-field &#8212; the Zwolferkogel &#8212; where you can sit on a sheltered balcony and enjoy a coffee or beer while taking in the view at 6,500 feet.

The route down includes a wide, easy trail for beginner to intermediate skiers or a more challenging World Cup run, a steep black descent that is probably the best skiing on the mountain.

Apr&#232;s ski activities in Saalbach Hinterglemm are plentiful. The valley floor is packed with countless bars, restaurants, shops and hotels crammed along narrow streets that make driving a nightmare.

Many of the bars have eye- catching themes. The Hex Bar, for example, features a large collection of occult images and witch statues. It also has a large board where customers can attempt to hammer nails with an extremely thin hammer, a task that becomes progressively more difficult with each beer consumed.

At the Tabletop Bar the mostly male clientele is entertained by scantily clad young women with bodies that suggest they have spent many hours on the slopes &#8212; or at least in the gym.

For dinner, try one of the restaurants severing chicken or beef fondue. The dish, which is actually Swiss, involves cooking meat on skewers in a small pot of broth boiling on a gas burner in the middle of your table. The skewers have different colored handles so you know which piece of meat is yours.

If you stay at a hotel above the valley, like the Bachbauernhof, there is one last challenge each evening. You can either fork out cash for a taxi, or end your day with a final grueling trudge up the muddy lower slopes before collapsing into bed to dream of another day&#8217;s adventures in the snow.