Atlas Kueche in Kaiserslautern offers the scents and flavors of Morocco 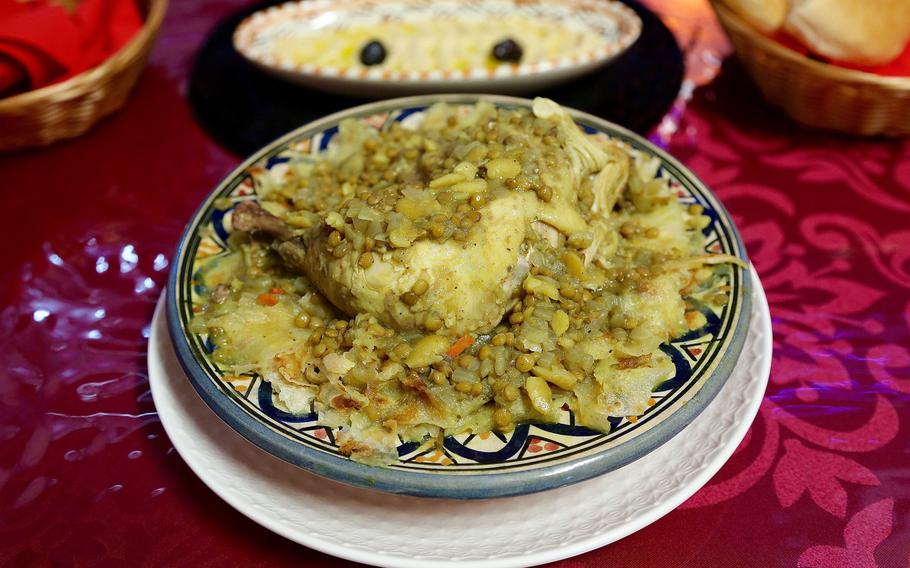 A plate of Rfissa, a popular Moroccan chicken dish served at Atlas Kueche in Kaiserslautern, Germany. (Will Morris/Stars and Stripes)

A plate of Rfissa, a popular Moroccan chicken dish served at Atlas Kueche in Kaiserslautern, Germany. (Will Morris/Stars and Stripes) 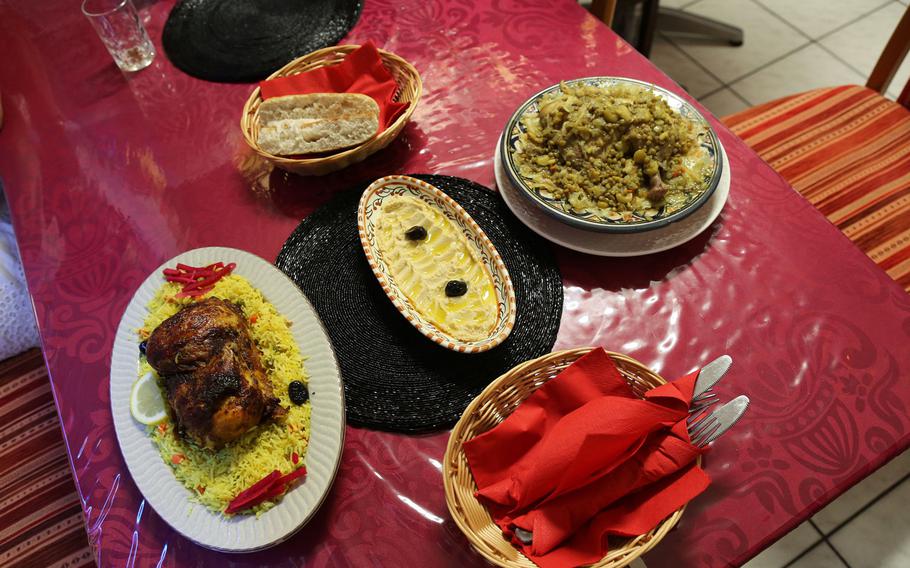 A dinner for two of Rfissa and grilled chicken as served at the Moroccan restaurant Atlas Kueche in Kaiserslautern, Germany. (Will Morris/Stars and Stripes)

Broadly speaking, there are two groups of people who open restaurants — those who do so with visions of cash dancing through their heads, and those who do so to share something special with others. For the former, food is merely a commodity and you are merely a customer. The restaurant might as well be selling T-shirts, and some do. But for the latter, food is an invitation to join someone’s life and learn about who they are. When I arrived at the Moroccan restaurant Atlas Kueche, I knew I had hit the jackpot. I could smell the scent of the spices they use wafting out of their door and floating into the street. When I stepped into the restaurant late at night 20 minutes before closing time, instead of giving me a cursory greeting and ushering my wife and our infant child to a table for a rushed meal, the host sat us down and gave us mint tea and his mother started cooking for us immediately, just like my grandmother would. Atlas Kueche, located on Rudolf-Breitscheidstrasse 66 in Kasierslautern, opened less than a year ago. It is a tiny place with just two tables and limited seating outside. The family-owned business’ claim to greatness, or goodness, anyway, is the matron of the family; an elderly woman who, with her daughter, cooks the food from scratch. Moroccan food shares much with its cousins across the region, and you will find all the classic Middle Eastern staples here like falafel, shawarma and hummus — all at reasonable prices. A falafel sandwich made fresh with all the fixings including pickled turnips costs 3 euros ($3.57), as do most things on the menu. As good as those dishes looked, I wanted to try something different. So I opted for the Rfissa at 6.50 euros, a dish of chicken cooked in a thick stew of lentils, fava beans, various diced vegetables and Moroccan spices laid over a bed of torn-up pieces of pita bread. Think chicken potpie meets the Middle East, but a whole lot better. My wife had the Hahnchen, or grilled chicken, for 6.50 euros — a succulently grilled half chicken covered in Moroccan spices and placed on a bed of yellow, usually saffron-seasoned rice, popular from Morocco all the way to Syria. Sprinkled throughout the rice were olives, pine nuts and pickled turnips. On the side we were given a dish of hummus and another plate of pickled vegetables. My wife and I have an ongoing battle whenever we go out about who orders the better food. Most of the time she wins. But we both agreed that this time I won, but just barely. My wife grew up in the Middle East and she couldn’t stop smiling the whole time we ate. She said the food, the atmosphere and the way we were welcomed made her feel like she was eating at her grandmother’s house.morris.william@stripes.comTwitter: @willatstripes