At Fasnacht time, Swiss town chases away winter with flames 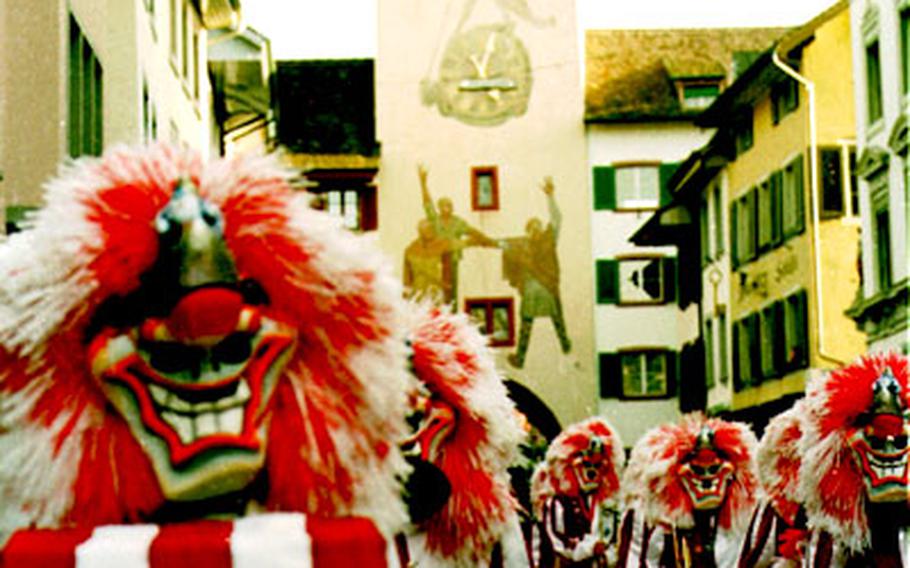 A Fasnacht parade with drummers and pipers takes place in Liestal before the “Chienbäse,” the traditional fire parade that starts at 7 p.m. (Peter Jaeger / S&S)

A Fasnacht parade with drummers and pipers takes place in Liestal before the “Chienbäse,” the traditional fire parade that starts at 7 p.m. (Peter Jaeger / S&S) A member of a Fasnacht club and builder of one of the fire wagons, in a thoughtful mood before the start of the fire parade. (Peter Jaeger / S&S) Members of a Fasnacht club ride their creation to the start of the fire parade. Later they will return through the medieval upper-town gate of Liestal, behind them, with their load on fire. (Peter Jaeger / S&S) Dry pine sticks are wrapped around a fresh birch branch to make what the Swiss call the “Chienbäse,” or “pine broom.” Here, excitement erupts along with the fire as the brooms are set ablaze. Fasnacht club members, wearing hats and protective gear, then carry the burning brooms through the masses of spectators. (Peter Jaeger / S&S) 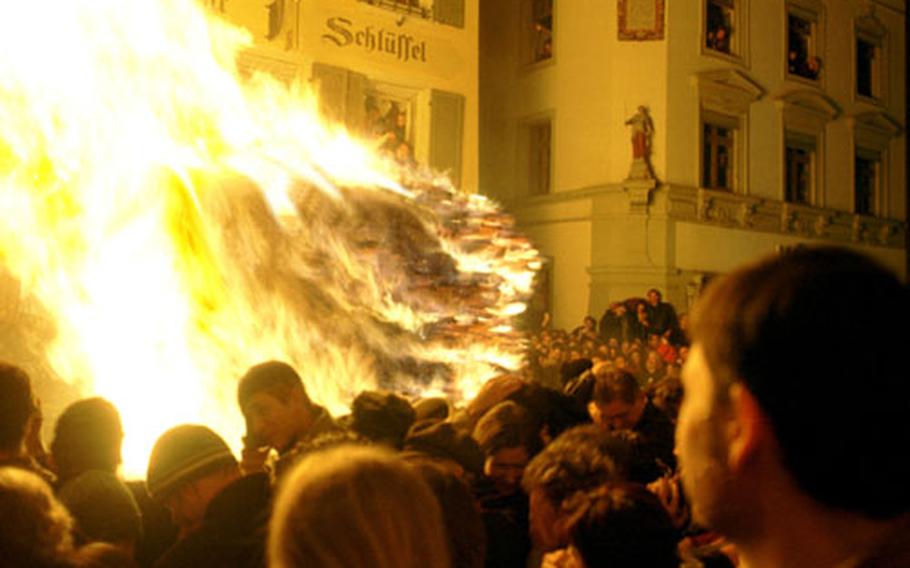 One of the wagons filled with burning wood creates enormous flames and heat. The first rows of spectators turn their heads and move backward to protect themselves. (Peter Jaeger / S&S)

It&#8217;s 7 p.m. The town goes dark and a roar rises from the crowd. Suddenly flames erupt in the street between packed rows of people.

There&#8217;s drama, excitement, movement of light and shade, and the sound and smell of burning pine sticks. Then a mass of marching figures carrying flaming wooden &#8220;brooms&#8221; flows into the small town of Liestal, Switzerland, like a stream of lava from a volcano.

So begins one of the most unusual of all Fasnacht (Carnival) parades in Europe, one that began about 80 years ago and is unmatched for drama and tension.

In the daylight, marchers carrying bundles of wooden sticks and passengers riding on wagons piled high with wood move through the T&#246;rli, the old town gate, and into the hills surrounding the town. That night, when darkness falls, they return.

Down from the hills, through the gate, the marchers come. Suddenly there&#8217;s more excitement, another uproar and shouts of approval. Below the T&#246;rli, an inferno erupts. The first group of four men dragging a wagon piled high with wood rushes through the gate in a burst of light, looking like a vehicle from hell.

The fire creates an enormous amount of heat. The first rows of spectators cover and turn their faces, then move backward to protect themselves. Sometimes the heat is so intense, especially when the fire parade comes to a standstill, that the bystanders crowd into a pile of people pushing one another backward to the walls of the old houses.

For two hours, almost 200 men and women wearing heavy leather jackets and gloves and various types of helmets to protect themselves, march through the old town carrying the blazing &#8220;fire brooms.&#8221; Interspersed among the marchers are 10 fire wagons that highlight the parade.

Sometimes the fire wagons are pushed back and forth through the gate, pretending to set it afire. It is an old game played between the fire masters and dozens of firefighters who soak the T&#246;rli inside and outside with streams of water from their hoses to protect the old tower from fire.

On each wagon that passes, the pile of wood is higher, resulting in bigger and bigger fires that appear to threaten the gate as the wagons pass through.

But since 1928, when the old medieval tradition of fire parades resumed in its present form in Liestal, the fire demons have failed to burn down the gate.

In fact, there has never been a major injury in that time. Still, it is hard believe that countries such as the United States, Germany or France would approve such an event. Even a Liestal official admits it would be hard to to justify starting the spectacle today.

But now that it has started, it is hard to stop. And the result is a Fasnacht tradition that should not be missed.

Where: Liestal is a small town of 14, 000 inhabitants about 10 miles southwest of Basel, Switzerland. You can reach it easily by train, bus or car (by Swiss Autobahn 2 and highway 12) from Basel. It has four hotels and a variety of restaurants and taverns.

When: Fasnacht and the fire parade are held one week later than the main European parades.

This year&#8217;s parade is Sunday, Feb. 29, at 7 p.m. Officials recommend that you be in Liestal by 3 p.m. to find parking and watch the traditional drum-and-pipe parade that takes place before the fire spectacle.

Gl&#252;hwein and wurst stands are available to help visitors get into the Carnival mood.