At Daisy's Cafe, the food is good but location is the draw Daisy's Cafe in Kamakura, Japan, offers a laid-back environment for those seeking a good meal or looking to enjoy a couple of pints of draft beer near the beach. (Tyler Hlavac/Stars and Stripes)

Daisy's Cafe in Kamakura, Japan, offers a laid-back environment for those seeking a good meal or looking to enjoy a couple of pints of draft beer near the beach. (Tyler Hlavac/Stars and Stripes) 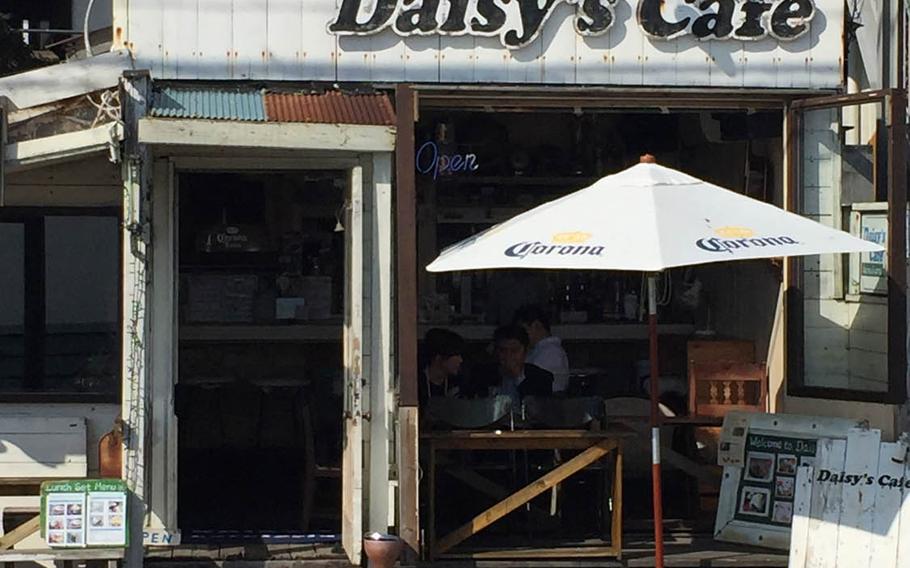 Daisy's Cafe in Kamakura, Japan, is a short walk from Hase station and is right across the street from the beach. (Tyler Hlavac/Stars and Stripes)

Eager for a change of pace from the fine eateries outside Yokosuka Naval Base in Japan, I traveled to trendy Kamakura in search of a quiet beachside spot to enjoy some good cuisine.

I came across Daisy’s Cafe, right across from the beach, just a short walk from Hase station. After seeing Okinawan taco rice on the menu and a sign saying dogs are welcome, I decided my search was over.

The open-air cafe, with a wooden bar, tables and seats, is every bit a beachside restaurant. Customers with pets ordered their meals while others sipped draft beer and gazed at the ocean as joggers ran nearby. Knickknacks, such as old coffee cans and soda bottles, decorate the place, and there’s an American-style dart machine in a corner.

The menu could best be described as California-influenced cuisine with a few Okinawan favorites thrown in. Sandwiches, Okinawan and Kamakura taco rice dishes and various types of wraps are among the more notable items. Sandwiches and wraps run toward the healthier side and include ingredients such as avocado, salmon and shrimp. Pistachios and beef jerky are among the more interesting side dishes.

I thought of being bold and ordering some taco rice but broke down at the sight of the chicken sandwich. My wife ordered garlic shrimp.

Everything was delivered fairly quickly despite just two staff members serving several customers. Both the shrimp and sandwich were delicious. My sandwich was part of a lunch set that came with a tasty draft beer — the bar offers a full menu of cocktails, and there are several beers on tap.

Everything was cooked well, and despite both items being lightly fried, there were no traces of fat or grease; everything had been removed during the cooking process, which made the food feel less heavy.

Our meals ended up costing more than something comparable back in Yokosuka, but we expected that. When you’re in touristy Kamakura, you’re going to pay Kamakura prices. The garlic shrimp with rice and a drink was 1,290 yen (nearly $11) and the chicken sandwich with chips and a beer was 1,780 yen (about $15).

While the food is good at Daisy’s Cafe, the location is its biggest draw. It’s great to get away from the cramped Tokyo metropolitan area and spend time in a relaxing local establishment that looks out at the ocean, and Daisy’s Cafe is a good stop for anyone looking to spend a day at the beach.

Location: 2 Chome-8-11 Hase, Kamakura. From Hase station, turn left and walk to the stoplight. Take another left and walk a few blocks until you arrive at the cafe. It’s on the left side of the road across from the beach.

Menu: Primarily California-influenced cuisine, such as wraps, seafood and healthier sandwiches with a few local items, such as Okinawan taco rice. Cheese and chocolate cakes are available for dessert. A full bar is available with draft beer. An English menu is available and staff speaks some English.