Most of the frescoes inside the Church of St. Catherine of Alexandria have been lost to the ravages of time. But there are still a few patches that date back hundreds of years. (Photos by Kent Harris/Stars and Stripes)

Most of the frescoes inside the Church of St. Catherine of Alexandria have been lost to the ravages of time. But there are still a few patches that date back hundreds of years. (Photos by Kent Harris/Stars and Stripes) 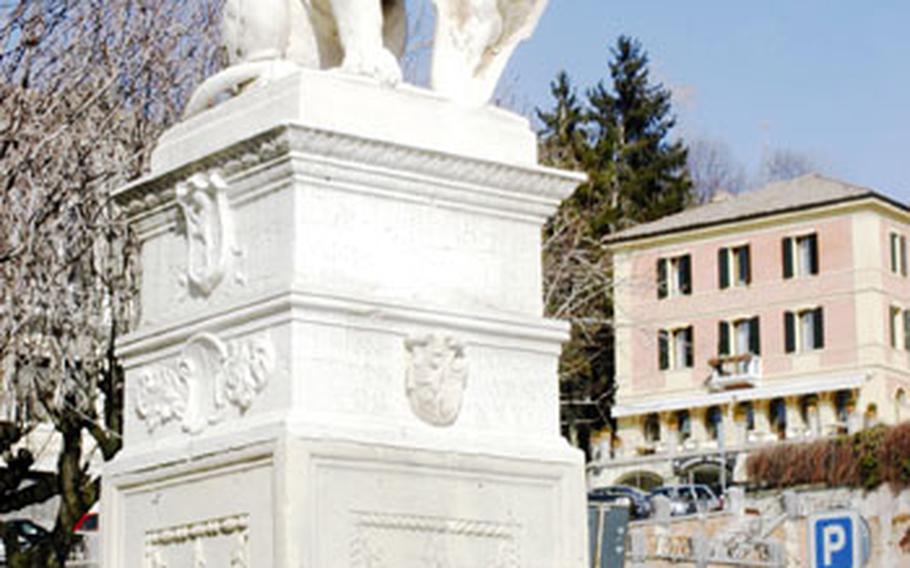 The Maggiore Fountain still spouts water from an underground aqueduct built by the Romans. Today, it marks the beginning of Piazza Garibaldi, which forms the center of the Italian hill town of Asolo. () 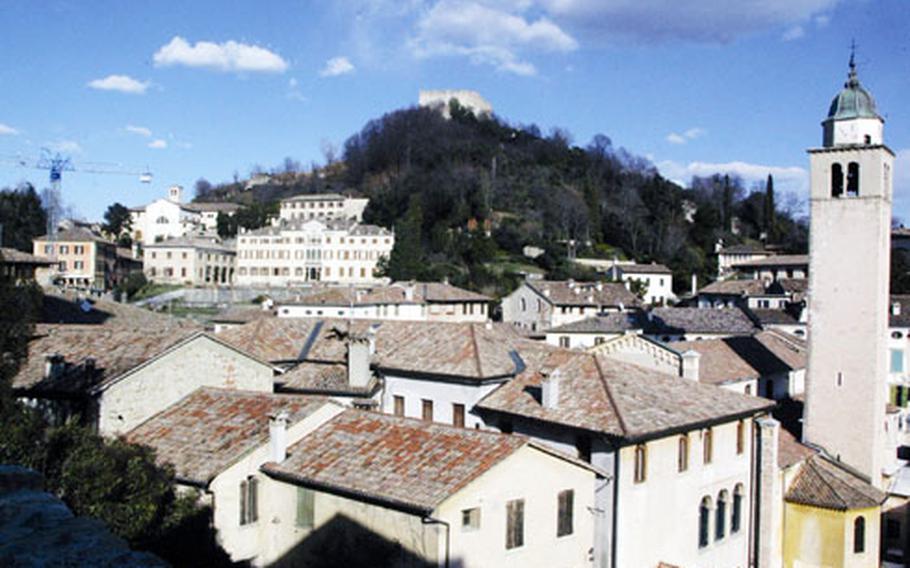 The bell tower of the city’s cathedral is one of the taller structures in Asolo, but the "Rocca" on Mount Ricco rises even higher into the sky. The hill that overlooks the city has been fortified since at least the 10th century. ()

Sunday is often a day for Americans to relax. And it&rsquo;s the only day of the week not considered a workday by some Italians (and Italian schoolchildren).

But in the town of Asolo, Italy, it&rsquo;s generally the busiest day of the week.

Want to walk around the ramparts of the "Rocca," the fortress perched on the hill overlooking the town? Go on a Sunday. That&rsquo;s the only day it&rsquo;s open. The city&rsquo;s civic museum is open Saturdays and Sundays, but not during the rest of the week. That&rsquo;s true in the summer as well as in the winter.

You can generally find a parking space in the town&rsquo;s main square during the week. But locals advise not to try it on a Sunday. The second Sunday of every month is reserved for an antique market that draws crowds &mdash; and shuts down streets.

The number of tourists visiting the town sitting at the foot of the Dolomite mountains doesn&rsquo;t support additional hours of operation, according to the town&rsquo;s tourist office. Asolo, which can trace its roots to pre-Roman times, might be better known to people in the United Kingdom and United States than it is to most Italians, they say. English poet Robert Browning and travel writer Freya Stark called the town home at stages during their lives. And many English-speakers once saw it as a mountain retreat from the busier crowds in Venice.

The lack of weekday crowds is not necessarily a bad thing. You can check out "Assunta," a painting by Lorenzo Lotto, in the city&rsquo;s cathedral for as long as you want. Or view the remains of 14th-century frescoes in the Church of Saint Catherine of Alexandra without another tourist in sight. Or in the site.

Climb up to the "Rocca," and you might be the only one on the path. The snow-topped mountains and dozens of surrounding communities are clearly visible on sunny days during this time of year. Unfortunately, in order to look down on the town, you need to get inside the castle. And that&rsquo;s not going to happen six days a week.

Piazza Garibaldi, in the center of town, features the Maggiore Fountain, which still spouts water from an underground aqueduct built by the Romans. Narrow streets branch off in several directions, many so narrow that they&rsquo;re either permanently designed for one-way traffic, or feature stoplights that allow alternating one-way traffic.

It is probably no surprise that Asolo is not an easy stop on the highway. It takes almost two hours to drive from Aviano along a series of regional roads. But many visitors will be tempted to stop along the way, viewing the Piave River, shopping in numerous stores (and factory outlets) or taking pictures of huge villas and a handful of interesting church steeples. Just make sure you save some frames for Asolo as well.

There are several routes from Vicenza, all of which should take an hour or so. One is via SP-248, by Bassano Del Grappa. Another is the SP-53 past Cittadella, north on the SP-667 and then west on the SP-248 toward Bassano. From Aviano, it&rsquo;ll take just under two hours. The easiest route is to take the SS-13 through Conegliano until it connects with the SP-248 just past Ponte Priula. Head toward (and eventually through) Montebelluna.

Admission to the civic museum is 4 euros. Admission to the "Rocca" is only 1 euro, but it&rsquo;s a tough 10-minute walk up from the town. During the week, it&rsquo;s possible to get a parking spot in Piazza Garibaldi. But you&rsquo;ll need to buy a ticket (1 euro) for every hour you want to park there (except from noon to 2 p.m.). There are other lots below the city when it gets crowded on weekends. The one just off the SP-248 is free and served by buses or shuttles from the city.

There are several places to eat in and around Piazza Garibaldi.

The tourist office is at the southern end of Piazza Garibaldi. It&rsquo;s open 9:30 a.m. to 12:30 p.m. daily except Mondays; 3-6 p.m. Thursdays through Sundays. English is spoken. Its phone number is 0423-529-046; its Web site is turismo.provincia.treviso.it and has an English-language option.