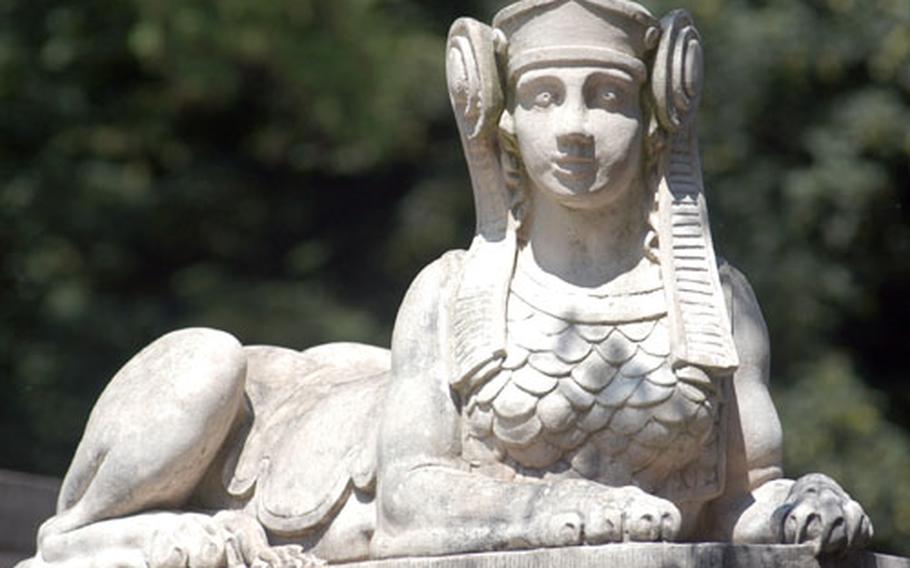 Four of these beautiful, strange creatures guard the Rote Brücke (Red Bridge) in Schönbusch Park, on the outskirts of Aschaffenburg, Germany. Long ago the road between Aschaffenburg and Darmstadt used to lead over the bridge. (Michael Abrams / S&S)

Four of these beautiful, strange creatures guard the Rote Brücke (Red Bridge) in Schönbusch Park, on the outskirts of Aschaffenburg, Germany. Long ago the road between Aschaffenburg and Darmstadt used to lead over the bridge. (Michael Abrams / S&S) 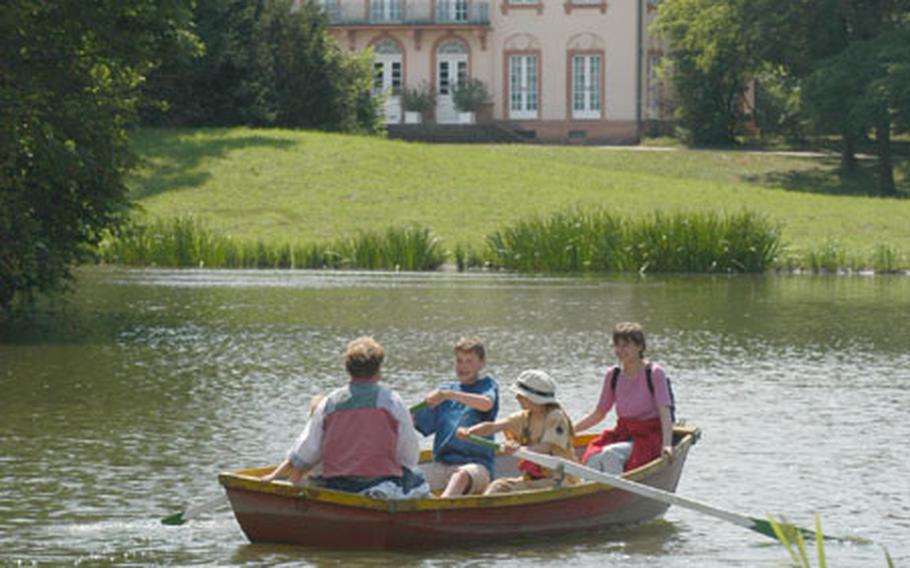 Rowing on the lake at Schönbusch Park, on the outskirts of Aschaffenburg, Germany. In the background is the small Schönbusch Palace, built by Emanuel Joseph von Herigoyen in the late 18th century. (Michael Abrams / S&S) 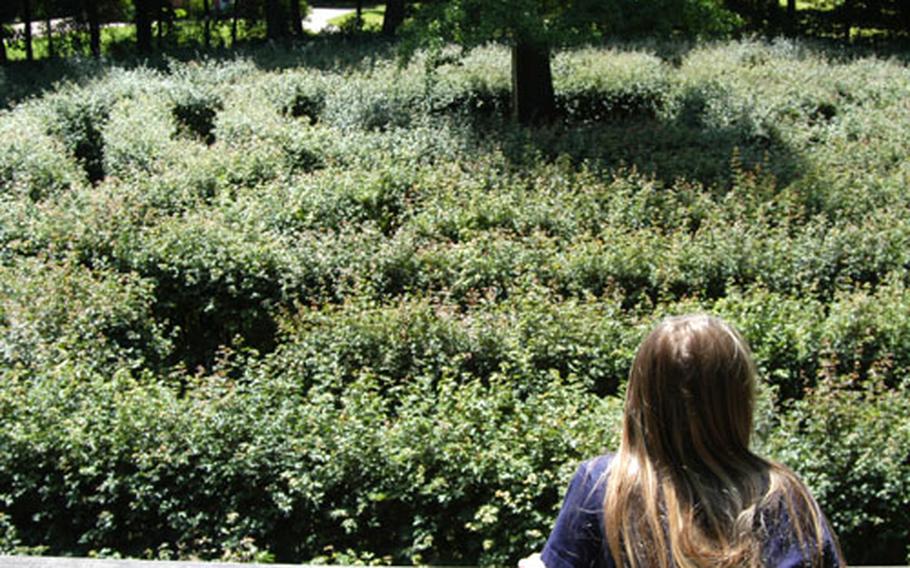 A girl watches from an observation platform as her classmates navigate their way through the maze at Schönbusch Park, on the outskirts of Aschaffenburg, Germany. (Michael Abrams / S&S) 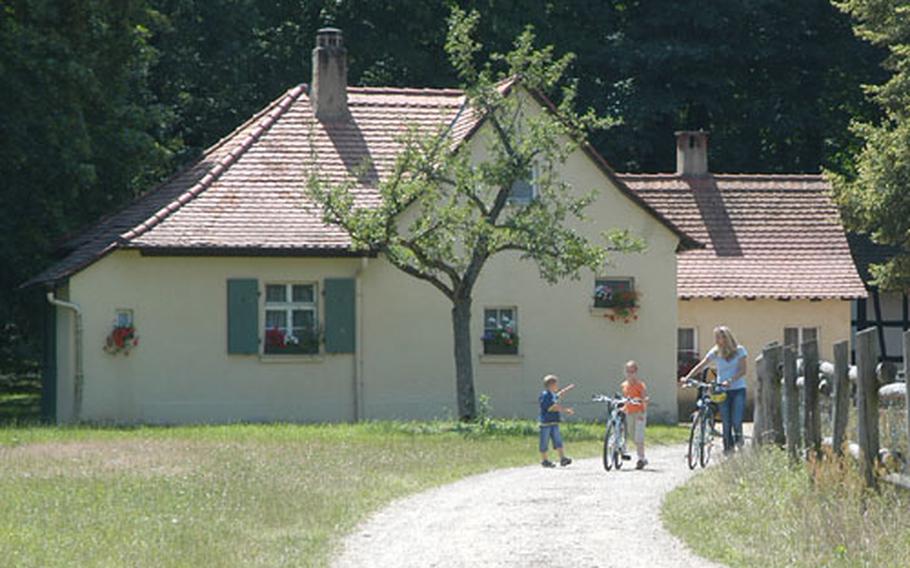 There are many paths to walk and bike on in Schönbusch Park, on the outskirts of Aschaffenburg, Germany. They lead you through the park&#39;s fields, forests and meadows and past its buildings, such as the Palace, the Temple of Friendship, the Philosopher&#39;s House and the tiny village, seen here. (Michael Abrams / S&S) 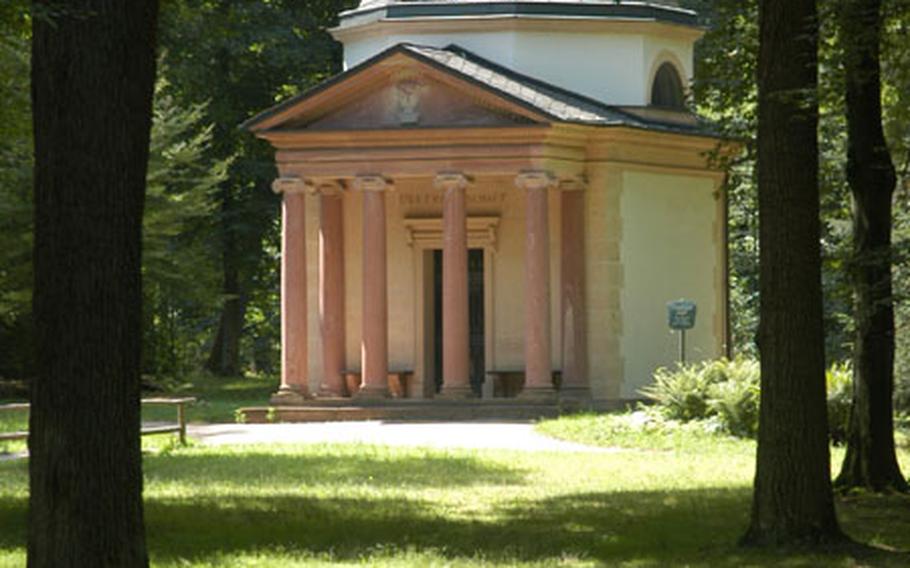 The Temple of Friendship in Schönbusch Park, on the outskirts of Aschaffenburg, Germany. Unfortunately, you can&#39;t go inside the temple that was built between 1786 and 1788. (Michael Abrams / S&S)

A day at Sch&ouml;nbusch Park is whatever you make of it.

It can be a relaxing, laid-back day in the fresh air, or it can be a day of exercise and fun. Or, it can be both.

The park, on the outskirts of Aschaffenburg, is one of the earliest landscape gardens in Germany. Architect Friedrich Ludwig Sckell designed it in the English landscape style for the archbishop of Mainz, Friedrich Carl von Erthal, in the late 18th century.

In the park&rsquo;s vast fields, forests and meadows, von Erthal had a man-made lake and buildings, such as the Temple of Friendship, the Philosopher&rsquo;s House and an observation tower, constructed. Also built was a dining hall, a ballroom, a kitchen and an Orangerie, for citrus plants to winter in. Working quarters for servants, houses for shepherds and a tiny village &mdash; supposedly the ideal vision of rural living &mdash; were built, as was an artificial bubbling cascade.

To crown it all, he had Emanuel Joseph von Herigoyen build him a little summer palace on the banks of the lake.

Today, the park is open for the public to enjoy.

There are miles of walking paths through the fields and forests and plenty of benches to sit on and watch the world go by. Bring a good book and a blanket and spend the day reading and relaxing in a meadow.

Bring a bike along and pedal through the park. Most of the paths are open to bikes, and when you get out into the fields, you can ride at a good clip, mostly unencumbered by pedestrians.

Get a light workout rowing one of the boats on the lake. Of course, if you are there with a special friend, a boat ride can be very romantic. Perhaps one of you would like to read a little poetry aloud while the other rows?

There is a playground where the kids can blow off steam, and a maze for everyone to get lost in.

When it is time to eat, Sch&ouml;nbusch offers you choices: Pack your own picnic, dine at the bistro-caf&eacute; in the former working quarters with service and fancy food, or chow down at the traditional Bavarian beer garden next door.

Directions: Sch&ouml;nbusch is about two miles west of Aschaffenburg on highway B 26 heading toward Darmstadt.

Food: There is a beer garden at Sch&ouml;nbusch Park, and a bistro-caf&eacute; in the building next door. The beer garden is self-service, while the bistro is more expensive but offers good food and service. You can also pack food, drink and a blanket and enjoy a picnic in one of the park&rsquo;s meadows.

More information: Check out the Web site at: www.schloesser.bayern.de/englisch/schloss/objekte/as_ sb.htm.