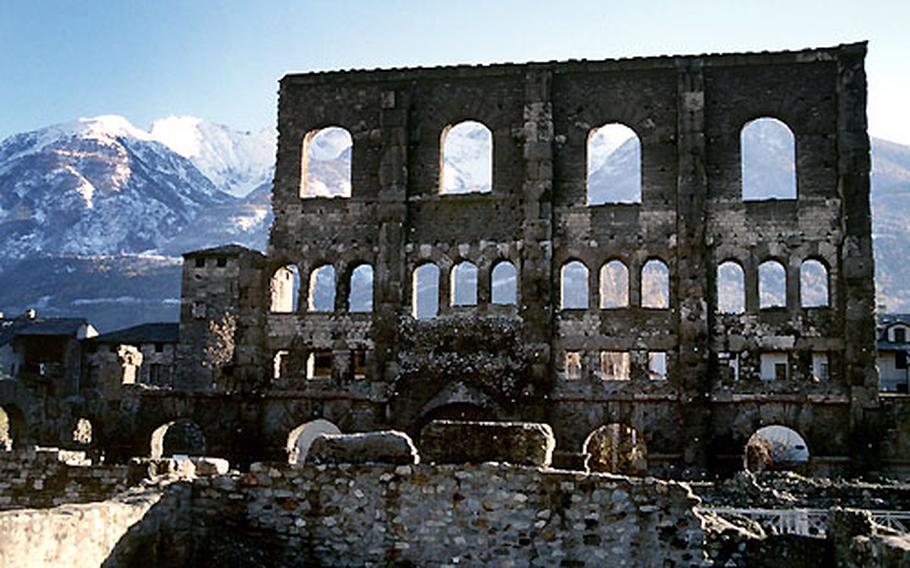 Part of the facade of Aosta’s Roman theater towers above the ruins of an amphitheater, which once offered covered seating for spectators in the first century B.C. (Christina Zarobe / Special to S&S)

Part of the facade of Aosta’s Roman theater towers above the ruins of an amphitheater, which once offered covered seating for spectators in the first century B.C. (Christina Zarobe / Special to S&S) 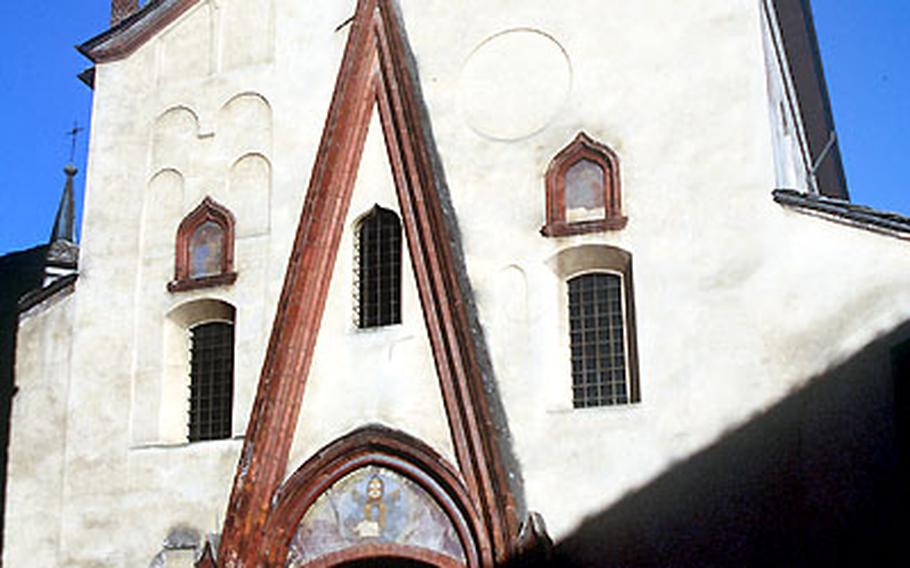 The 11th-century Collegiate Church of St. Orso is a pleasant architectural mix of Gothic and Baroque features. (Christina Zarobe / Special to S&S) I tend to shy away from big-name European festivals. Too often, cookie-cutter merchandise and parking a mile away have replaced whimsical handmade crafts displayed in a charming, old town center.

Not so at the St. Orso Fair, where tradition has taken center stage for the past 1,000 years, perhaps longer, in the town of Aosta. Nestled in the pristine mountain countryside of Italy&rsquo;s northern Valle d&rsquo;Aosta region, the festive event every Jan. 30 and 31 celebrates the rich local culture with music, dancing, food &mdash; and a bounty of authentic crafts.

Produced by some 1,000 local artisans, the handicrafts range from engaging wood figurines and elaborate sculptures to wrought iron, leather and delicate lace creations. Forget flea market kitsch &mdash; many items are artwork quality. Prices vary from below $50 to thousands.

On a cloudless day last winter, my husband and I bolted out the door, eager to play hooky during the middle of the workweek. We made the drive from our former home in Turin to Aosta in just over an hour. The landscape transforms from plains to soaring, snow-covered peaks, and mighty fortresses maintain a lonely vigil over expansive valleys.

Exiting the autostrada, I was initially disappointed by Aosta&rsquo;s dreary, modern outskirts. I soon realized that the main attraction here is the historic town center &mdash; compact and manageable, especially as a day-trip diversion for skiing enthusiasts. This region is definitely a winter sports paradise. But Aosta&rsquo;s also an ideal place to take a break from the apr&egrave;s ski scene.

The brilliant sunshine was deceptive. A sharp wind kept us bundled up as we walked along the main pedestrian walkway. We soon forgot the chilly temperatures, though. Subconsciously, I unsnapped the clasp on my wallet in anticipation.

Table after table displayed exquisitely carved wood pieces ranging from historic and religious scenes to utilitarian items, such as sleek fruit bowls and decoratively chiseled cutting boards. I particularly liked the bouquets of wooden flowers, colorfully painted or in a natural hue, then arranged in tall metal canisters.

We chuckled as the man selling rows of wooden clogs, called sabots, clopped comically down the cobblestone street. The small wood figurines gave us a flavor of the region depicting hearty Valle d&rsquo;Aosta people of the past, bushels of kindling hoisted onto their backs, hiking through the valley with a walking stick in hand.

A loaf of crusty bread, slices of salami and a bottle of unlabeled wine on nearly every stand fortified the vendors against the alpine wind. My mouth watered as we passed enormous wheels of cheese heaped in shop windows. On the first night of the St. Orso Fair, a mini-fest called Veilla offers visitors the chance to indulge in the regional cuisine while being entertained with song and dance.

Off the main street, folding tables were stacked with sausages, jars of honey and bottles of wine from local vineyards. Massive farm equipment, gleaming in the bright sunshine, reminded us of the region&rsquo;s agricultural roots.

The fair is named for St. Orso, a hermit and mountain craftsman who lived in the Aosta Valley during the early sixth century. According to legend, it began in front of the church where he stood, distributing clothing and sabots to the poor. Now the event covers the whole city center.

Beyond the fair, Aosta&rsquo;s abundant historic treasures &mdash; numbering more than two dozen sites &mdash; are well worth visiting. As far back as 2900 B.C., when a Celtic Salassi tribe inhabited the area, Aosta has been prized for its strategic location. Today, the city stands at a commerce crossroads joining Italy to France and Switzerland by way of the Mont Blanc and Great St. Bernard tunnels.

The main road into town conveniently leads to the Arch of Augustus. In 25 B.C., the Romans conquered the Celtic Salassi people and established a military outpost in Aosta. To mark the victory, they built the curved span, a stone monument with a single supporting arch rising nearly 38 feet. Located on an island in a busy intersection, the arch stands alone amid the 21st-century traffic whizzing by.

Though the St. Orso Fair is a popular regional event, we easily found tranquil spots to relax. The 11th-century Collegiate Church of St. Orso is a pleasant architectural mix of Gothic and Baroque features.

Just outside the church is a 12th-century cloister, a peaceful enclave with an ancient well in the center. Some 40 stone columns with beautifully carved marble capitals depict scenes from the bible&rsquo;s Old and New Testament and the life of St. Orso.

Back on Via Sant&rsquo; Anselmo, my husband and I strolled a short distance to the Pretorian Gate, also dating to 25 B.C.

This mammoth Roman structure consists of a central arch &mdash; once used by chariots &mdash; and two smaller openings for pedestrians. Walking beneath the arches, I was struck by the enormity of the gate: The outside wall measures more than 14 feet wide.

Down a gravel walk to the right stands Aosta&rsquo;s Roman theater. Part of the fa&ccedil;ade towers above the ruins of an amphitheater, which once offered covered seating for spectators in the first century B.C. Set against a brilliant blue sky and the imposing Alps, the scene was a striking snapshot.

We turned back onto Via Sant&rsquo; Anselmo, the city&rsquo;s main artery and fair central. Ahead, the narrow walkway widens, a clue to what lies ahead. But I still caught my breath when I first glimpsed the spectacular Piazza Emile Chanoux. The square is anchored by an elegant town hall, once a hotel dating to 1839, with a cream-colored exterior that sparkles in the sunlight.

Lingering on a bench in the piazza, we basked in the warmth of the late-afternoon rays, surrounded by creativity, history and nature. I sighed, happy. After a millennium, the most cherished display at the St. Orso Fair is still tradition.

Christina Zarobe is a freelance writer who recently returned to the States after living in Europe.

Information is also available on the Internet at:

More details can be found in French and Italian, at www.santorso.com.