A trip to Grindelwald is like skiing through a picture postcard 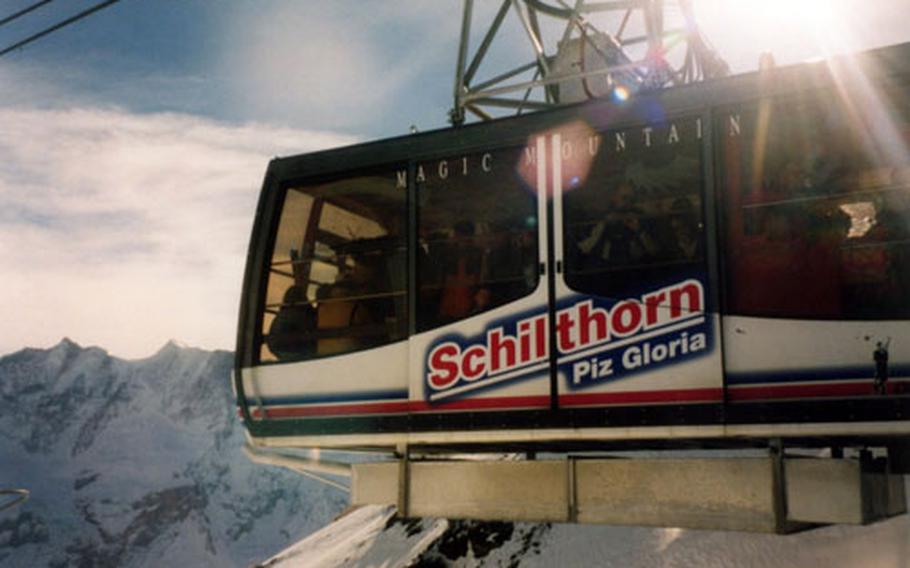 A cable car hangs above the slopes of Mürren- Schilthorn, where the James Bond film, “On Her Majesty’s Secret Service,” was filmed. (Leah Larkin / Special to Stripes)

A cable car hangs above the slopes of Mürren- Schilthorn, where the James Bond film, “On Her Majesty’s Secret Service,” was filmed. (Leah Larkin / Special to Stripes) 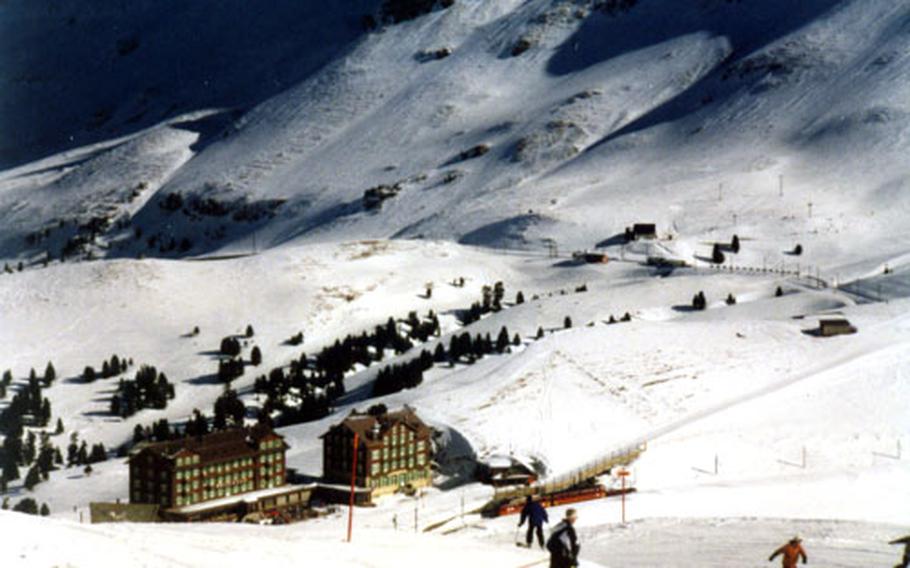 From the old hotel that dominates the area of Kleine Scheidegg, you can take the sight-seeing train to the Jungfraujoch. (Leah Larkin / Special to Stripes) 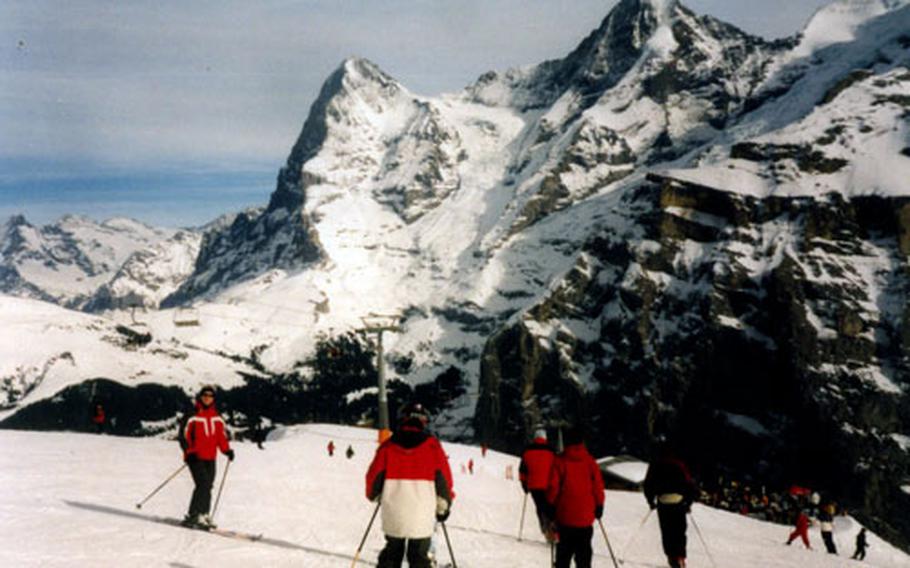 The Jungfrau ski region with the slopes of Grindelwald, Wengen and Mürren offers 120 miles of prepared runs. (Leah Larkin / Special to Stripes)

She was convinced that the best skiing is in the French Alps. Every season she and her three children spent a week at Christmas and another at Easter in the Three Valleys resort in France.

Then, last season I asked her to join me and members of the Patch Ski Club of Stuttgart, Germany, for a three-day weekend in Grindelwald, Switzerland.

My friend, Gerlinde S&#228;lzer, was overwhelmed. We were blessed with sunshine and good snow. We skied blue, red and black runs, enjoyed cozy huts, the picturesque old mountain town &#8212; and the trains.

The Grindelwald slopes are under the famous peaks of the Eiger, M&#246;nch and Jungfrau. On the other side of these mountains are the connecting ski slopes of Wengen, a car-free village accessible by train only. Together they comprise the Kleine Scheidegg- M&#228;nnlichen ski area.

There are cable cars that get to the high slopes, but there are also cog trains. Painted bright green and yellow, the old-world trains chug up the mountains not much faster than a child&#8217;s model train. From afar, surrounded by snowy peaks, they look like toy trains set in a department store window at Christmas.

She was also impressed by the skiing. The slopes of the Kleine Scheidegg-M&#228;nnlichen ski area are in Switzerland&#8217;s Bernese Oberland near the city of Interlaken. All are part of an even greater ski region, the Jungfrau Top Ski Region, which also includes the slopes of First across the valley from Grindelwald and the slopes of M&#252;rren-Schilthorn across the valley from Lauterbrunnen, the town just below Wengen. Scenes from the James Bond movie, &#8220;On Her Majesty&#8217;s Secret Service,&#8221; were filmed at M&#252;rren-Schilthorn.

The Kleine Scheidegg area has about 62 miles of ski trails; the entire Jungfrau region has some 120 miles of slopes.

On our first day, we rode the train from Grindelwald to Kleine Scheidegg, a complex under the Eiger glacier with a train station, hotel, restaurant, bars and shops. From there, we had to climb up to the four-person Lauberhorn chair lift that took us to the top of the Lauberhorn World Cup downhill slope, the world&#8217;s longest, and according to some, greatest, downhill course.

We skied the slope, with pauses on the way down. It&#8217;s hard to imagine that racers ski this run nonstop at record-breaking speeds all the way to the bottom.

We skied red runs on this, the Wengen side of the mountain, down to Allemend, a spot along the rail tracks where the train stops.

We rode back up to Kleine Scheidegg, then skied down the other side near the bottom of the Salzegg T-bar. We had to take our skis off and cross the tracks to get to the T-bar for a steep and treacherous ascent to a black run &#8220;for good skiers only.&#8221; It was challenging and fun.

At the bottom of the run, we had an outdoor lunch, Kaseschnitte (an open-face sandwich of melted Gruyere cheese), at the Eigergletscher bar. That afternoon we skied a long red run, Number 21, through pine trees. We skied a blue run, Number 6, then the Number 3 red run to the bottom of the M&#228;nnlichen cable car at Grund.

As we got close to the bottom we were skiing past worn, weathered huts, then picture-book chalets. This was Switzerland at its postcard best.

The next day, we took the ski club bus around the mountains to Stechelberg. From there, we rode four different cable cars, all crowded with waiting lines, to get to the top, Schilthorn Piz Gloria at 9,748 feet. It was almost 2&#189; hours of bus and lift rides before we were ready to ski.

The wait was even longer as we took time to climb up to the Piz Gloria revolving restaurant terrace for spectacular views and photo ops of some 200 mountain peaks.

There is only one run from the top, a black run that isn&#8217;t that difficult. However, as it&#8217;s the only way down, it was crowded. Avoiding collisions with other skiers added to the downhill challenge.

Red and blue runs make up the middle section of the mountain, but they are all short. We decided to ski back to the bus at Stechelberg, which was a mistake as we ran out of snow near the bottom. We picked our way between houses and huts, searching for patches of snow so we would not have to de-ski and walk. We agreed that skiing the M&#252;rren side was fine for one day, but the better skiing is in the Kleine Scheidegg area.

On our last day, we explored more red runs on the Wengen M&#228;nnlichen side. We followed trail 22 through a pine forest to Brandegg for an afternoon treat &#8212; Apflek&#252;chli, apple fritters laden with vanilla sauce &#8212; then continued on 22 for a leisurely ski to the bottom.

During our short stay in Grindelwald, we did not ski the slopes of First on the other side of the town because we were content with the Kleine Scheidegg area. The First area is smaller and the slopes are said to be easier.

Nor did we take time for mountain sight-seeing via a ride on the Jungfraubahn, a train from Kleine Scheidegg through the Eiger tunnel to the Eigerwand and Eismeer stations with spectacular views through large observation windows hewn from solid Alpine rock. The trip ends at the Jungfraujoch, the highest train station in the world at 11,400 feet, called &#8220;the top of Europe.&#8221;

Although S&#228;lzer is not about to give up the French Alps, she would love to return to Grindelwald.

Leah Larkin, a member of the Society of American Travel Writers, is a journalist and skier living in France.