A ski holiday above Kaprun, Austria 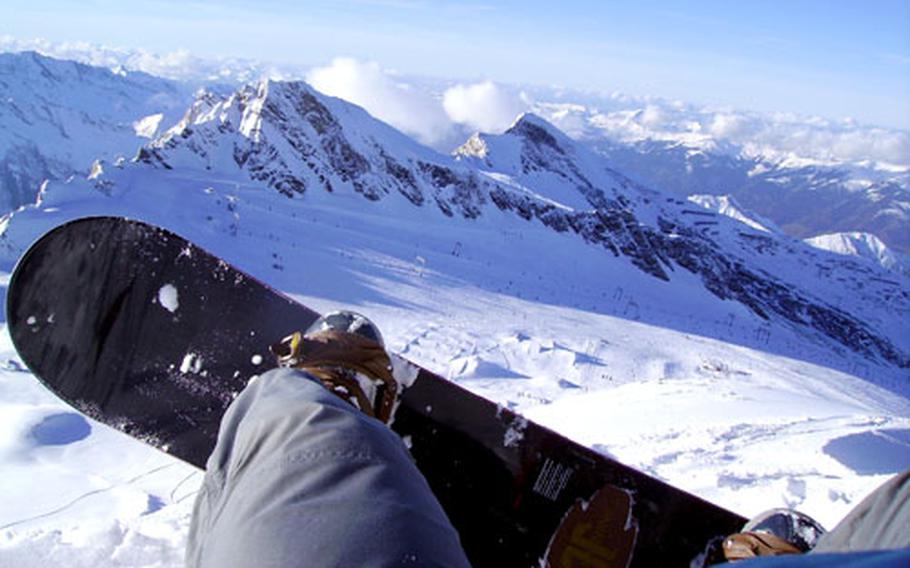 A snowboarder looks down at the mountaintops as he stands perched at the start of the black run, 10,000 feet up, at the Kitzsteinhorn ski area near Kaprun, Austria. The Kitzsteinhorn is an ideal spot for families because it offers runs suitable for beginners as well as more advanced skiers. (Seth Robson / S&S)

A snowboarder looks down at the mountaintops as he stands perched at the start of the black run, 10,000 feet up, at the Kitzsteinhorn ski area near Kaprun, Austria. The Kitzsteinhorn is an ideal spot for families because it offers runs suitable for beginners as well as more advanced skiers. (Seth Robson / S&S) 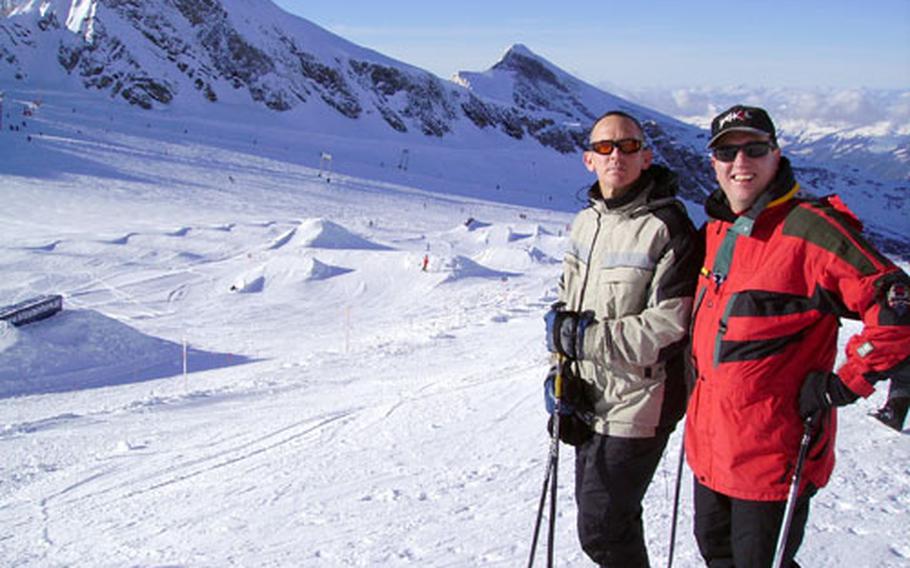 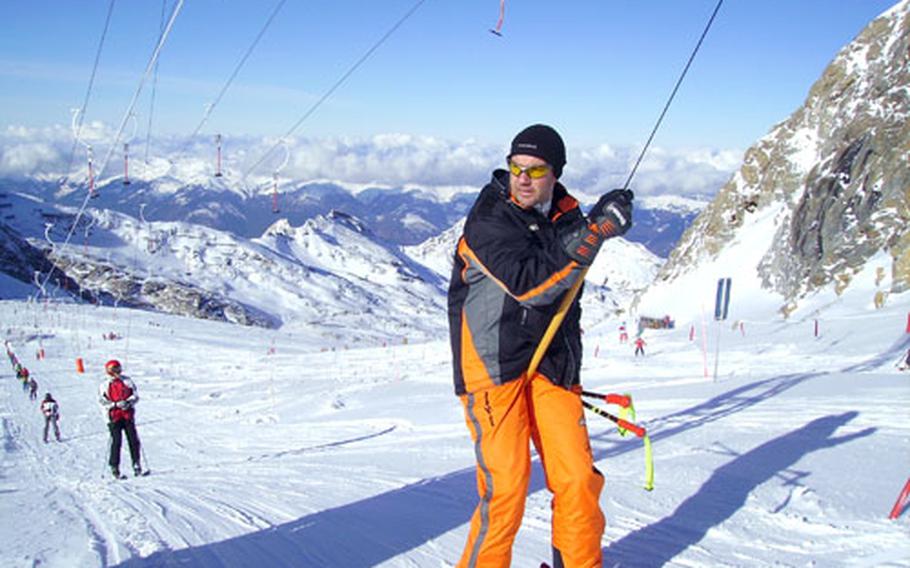 A skier rides a T-bar during an early season trip to the Kitzsteinhorn ski area. The terrain on the glaciers will not challenge anyone except a novice skier, but it is a good place to work off the summer rust. (Seth Robson / S&S) These days the Gletscherbahn, actually a series of three gondolas, is the only way to get to the Kitzsteinhorn ski field. A real railway, which used to transport skiers to the slopes through a 2-mile-long tunnel (center rear in photo), closed after a deadly fire in November 2000 that killed 155 people, including several members of U.S. military communities in Europe. (Seth Robson / S&S) A mountain goat hops through the snow on the steep mountainside beneath the Gletscherbahn carrying riders to the Kitzsteinhorn ski field above Kaprun, Austria.

These days, the Gletscherbahn &#8212; or glacier railway &#8212; is a series of three gondolas, and is the only way to get to the ski field. A real railway, a funicular train, which used to transport skiers to the slopes through a 2-mile-long long tunnel, closed after a fire in November 2000 that killed 155 people, including several members of American military communities in Europe.

Its tragic history aside, the Kitzsteinhorn is a good place for an early-season trip. It has excellent snow conditions and plenty of terrain suitable for beginning and intermediate skiers, making it an ideal spot for families.

On Veterans Day, members of the Bavarian Ski Club from Grafenw&#246;hr and Vilseck, Germany, hit the slopes, and found plenty of places to showcase their skills.

The best early-season skiing is naturally at the top of the mountain, where there is always plenty of snow covering the Schmiedingerkees and Maurerkees glaciers.

The easiest way to get to the top is via the Gletscherbahn 3. The ride is breathtaking, and it feels as if the gondola is several hundred meters above the slopes in places. The central red-and-white, 375-foot-tall tower is touted as the tallest gondola tower in the world.

At the top, you are about 10,000 feet above sea level and just below the 10,770-foot Kitzsteinhorn summit. Views from the top include countless snowcapped peaks and the valley below where Kaprun is nestled.

The only really challenging black run that was open on the mountain early in the season leads from the top of the Gletscherbahn 3 to a snowboard park a couple of hundred yards below. Most people ride the Gletscher Shuttle, a small cable car that takes them down to the easy slopes.

The terrain on the glaciers will not challenge anyone except a novice skier. There are several T-bars up slopes that are wider than an autobahn and were free of ice and rocks on Veterans Day.

A chairlift below the T-bars was a good option when the weather turned bad because it had a plastic cover that could be pulled down to keep skiers warm on the way up. However, most of the chairlift runs were dotted with rocks, and skiers tended to stick to the snowplow track.

For snowboarders, the Kitzsteinhorn, at least early in the season, is nothing special. There was no half-pipe. Apparently there is more than one snowboard park, but the only one that was open on Veterans Day has just a few jumps and a couple of ramps and no rails.

The park&#8217;s easy run includes a ramp to practice grinding and three table-top jumps that get progressively bigger as you head down the slope. The hard run includes a down-slanted ramp, which was not functional the day I visited, and a couple of large lip jumps that can only be completed if you get enough air to make it to the landing zone.

The one at the bottom was too big and scary for me or anyone else I saw up there, but there were a few boarders and skiers pulling 360s and grabs on the smaller jumps.

When the weather forces you inside, there is a large restaurant at the top of the Gletscherbahn 2 that includes a wide range of traditional Austrian fare at reasonable prices. I had potatoes and bacon followed by apple strudel with cream cheese sauce for lunch, all for about 6 euros. There is also a separate bar and a beer tent outdoors that features piped-in techno music.

A Kitzsteinhorn lift pass costs 36 euros per day, with a 4-euro daily discount if you buy a two- day pass. You can put the pass in your pocket and just hold your jacket up to a sensor on the turnstile to get on the gondola. Remember to keep your pass because you need it to get down.

Gear rental in Kaprun is dominated by the Intersport chain, which has two stores in town and rental shops at the top of the Gletscherbahn 1 and 2 at Kitzsteinhorn. Renting a child&#8217;s skis, boots and poles costs 23 euros per day.

Kaprun has a range of hotels, pensions and apartments. We stayed at the Hotel Antonius, which charged club members 45 euros per person for a double room, including breakfast and dinner. Reductions are available for children staying in a room with two adults.

The town has plenty of bars, restaurants and discos for those who still have energy after a day on the slopes. And there is a shuttle bus from town to the foot of the Gletscherbahn to make it easy to get started again the next day.