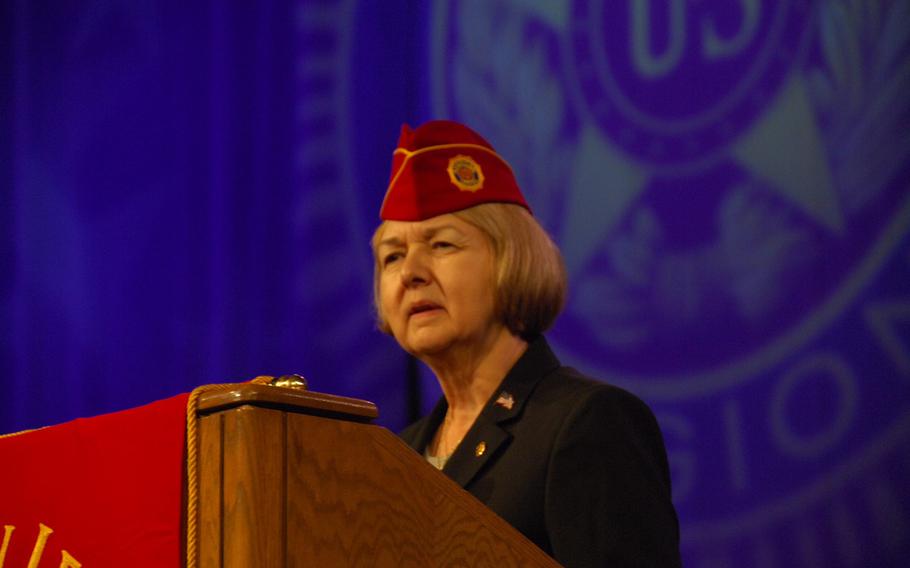 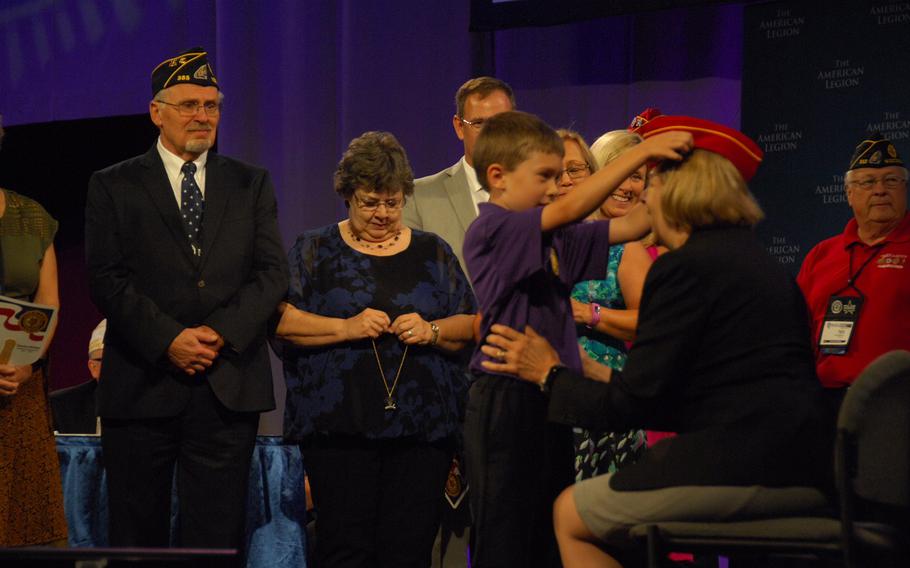 Buy Photo
Denise Rohan, right, sits as her grandson, Sawyer, places her new cap on her head onstage during the American Legion National Convention in Reno, Nev. on Thursday, Aug. 24. Rohan was elected to be the group's new national commander. (Nikki Wentling/Stars and Stripes) 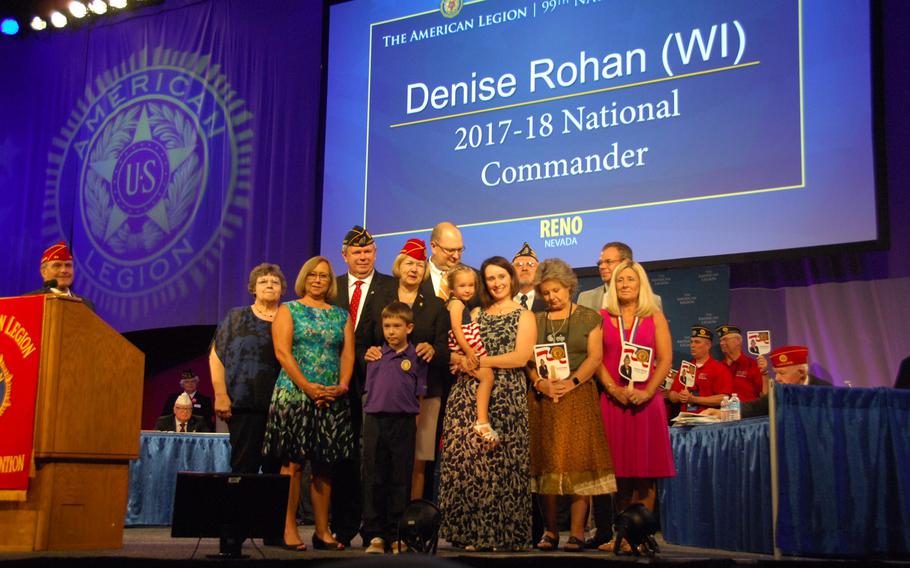 Buy Photo
Denise Rohan surrounded by her family after being elected the new national commander of the American Legion on Thursday, Aug. 24, in Reno, Nev. (Nikki Wentling/Stars and Stripes) 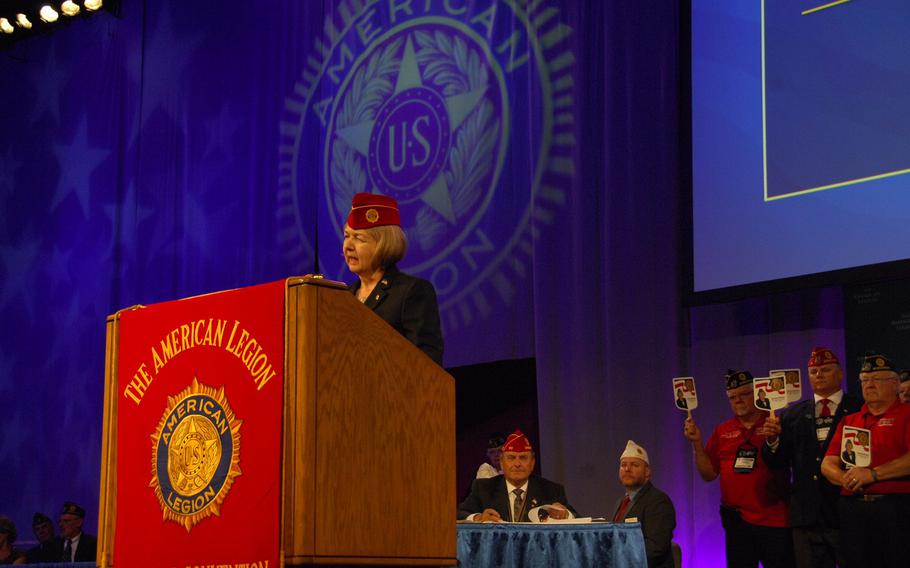 Buy Photo
Denise Rohan addresses American Legion members for the first time after she was elected national commander of the organization Thursday, Aug. 24 in Reno, Nev. (Nikki Wentling/Stars and Stripes)

RENO, Nev. – Hundreds of veterans paraded through a large convention hall to Sister Sledge’s “We are Family,” arms wrapped around one another Thursday when the American Legion, a 99-year-old organization representing 2 million veterans, elected its first female national commander at the conclusion of its annual convention.

Denise Rohan, an Army veteran living in Wisconsin, now leads what President Donald Trump just called “a very powerful organization.” She will represent the Legion for one year, traveling the country to visit posts and testifying before Congress.

“When our organization was started back in 1919, our founders said, ‘A veteran is a veteran,’” Rohan said. “So ever since then, women have been part of our organization. Women could vote for national commander of the American Legion before they could vote for president of the United States, and there are females leading this organization across the nation. I just happen to be the lucky one that gets to do this.”

Disabled American Veterans elected its first female commander, Army veteran Delphine Metcalf-Foster, on Aug. 1. Before this month, the first – and last -- female commander of a major national veterans organization was Mary Stout, who led Vietnam Veterans of America in 1987 when the organization had about 30,000 members.

First denied, now in chargeIn 1980, an American Legion recruiter knocked on Rohan’s door to ask her husband, Mike, to join the local post. The couple met while serving in the Army.

When Rohan asked to join the post, she was told to join the American Legion Auxiliary, a group for veterans’ spouses.

She told that story before the thousands of veterans gathered in Reno, Nev., on Thursday, with the message to not exclude female veterans.

“Here I am today, the newly elected national commander of the largest veterans service organization in this nation,” Rohan said. “And that post that denied me membership 37 years ago? Well, they have a picture of me up in their post with a sign under it that says, ‘She could have been a member here.’ Remember: Women are veterans too.”

Rohan, 61, joined the American Legion in Sun Prairie, Wisc., in 1984 and held leadership positions there and in Verona, Wisc. During the nomination process Thursday, a couple hundred veterans from Wisconsin held onto fans with Denise’s photo on them and waved them wildly each time a state’s delegation voted for her.

As national commander, Rohan sets the theme for the year. She chose “Family First,” with a renewed focus on supporting families of deployed servicemembers.

“American Legion needs to step up, find out who those families are and make sure we’re there for them,” Rohan said. “It’s a matter of national security.”

Rohan talked about some of the Legion’s success this year, including advocacy for legislation that Trump signed onstage at the Reno convention Wednesday that aims to shorten the amount of time veterans wait to hear decisions on their claims for Department of Veterans Affairs benefits and health care.

She also praised the new “Forever GI Bill,” signed earlier this month, which eliminates a 15-year cap on veterans to tap into their education benefits. The American Legion was one of a handful of veterans organizations that championed the measure.

By the time Rohan was ready to go back to school after her military service, she had only one month remaining of GI Bill eligibility, she said.

“I love the fact that just got passed,” Rohan said. “I can appreciate that.”

Expanding services for womenMetcalf-Foster, 74, remembers sitting on her father’s lap at their home in Vallejo, Calif., as a young child, while he showed off photos of his experience as a Buffalo soldier in the Spanish-American War.

Her father was 70 when she was born and died when she was 7, but she can still recall the pride he showed while telling her about his time in the military. That’s part of the reason Metcalf-Foster became a nurse, and then joined the Army at 34, when she was married with children.

“He was so proud,” she said. “He’d always tell me, ‘You have to do something to help people.’ I remembered that as I got older.”

Metcalf-Foster served for 21 years. In 1991, a nerve was cut in her leg while she was in Saudi Arabia as part of Desert Storm/Desert Shield. She joined Disabled American Veterans when she was discharged in 1992, after a DAV member approached her unit to tell the servicemembers about the group.

She was the first female commander of DAV in California in 2004.

As the first female national commander, Metcalf-Foster wants to bring some attention to issues specific to women at the VA – and she’s already had some success.

“The surgeon looked at me and said, ‘Excuse me?’” Metcalf-Foster said. “I took this issue up with my Washingon, D.C., staff, and they jumped right on it. We got resolutions and worked with the VA to ensure there are gender-specific prosthetics.”

DAV will advocate for an expansion of obstetrics and gynecology services at the VA, she said. A major focus for the organization over the past year was to extend VA caregiver benefits to veterans injured before 9/11. The VA currently offers compensation and other support services to caregivers of post-9/11 veterans. Metcalf-Foster said that advocacy would continue.

“We’re fighting to get that changed,” she said. “The groundwork has been laid. I’m just continuing what our great organization has done.”