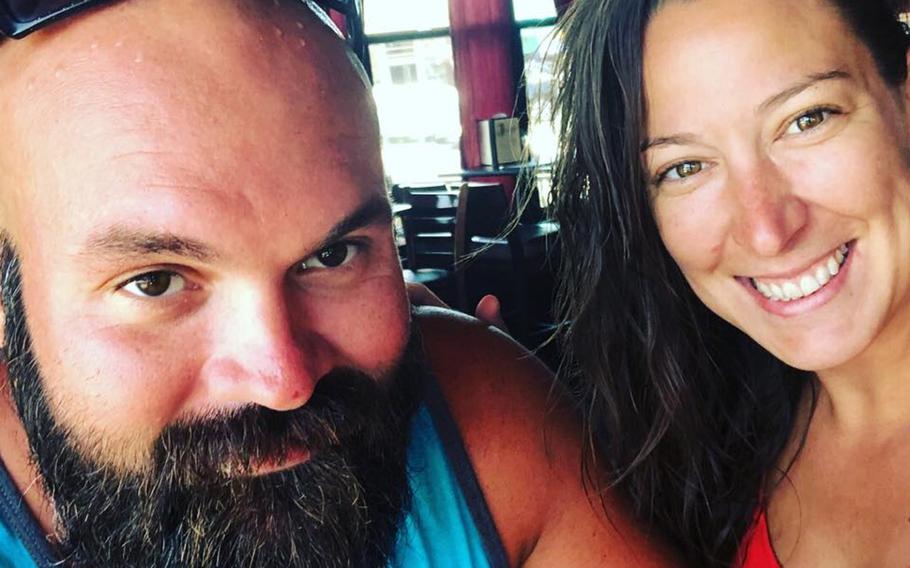 Ashli Babbitt, shown here with her husband Aaron Babbitt in a 2018 photo from social media, was identified as the woman shot and killed while participating in the takeover of the Capitol Building in Washington D.C., Wednesday. Babbitt was a U.S. Air Force veteran, according to media reports. (Facebook)

The woman who was shot and killed during the takeover of the Capitol in Washington, D.C., on Wednesday was identified as Ashli Babbitt, an Air Force veteran, according to U.S. Capitol Police.

"As protesters were forcing their way toward the House Chamber where Members of Congress were sheltering in place, a sworn employee discharged their service weapon, striking an adult female," police said in a statement Thursday. "Medical assistance was rendered immediately, and the female was transported to the hospital where she later succumbed to her injuries."

The employee has been placed on administrative leave pending the outcome of a joint Metropolitan Police Department and Capitol Police investigation, authorities said.

Babbitt, 35, served 14 years in the Air Force, her husband told KUSI-TV in San Diego, calling his wife a "great patriot."

On Wedesday, an unnamed family member had identified Babbitt, a resident of Ocean Beach, Calif., as the woman in video footage on the internet, according to the Los Angeles Times. However, the family had not been immediately able to confirm Babbitt's identity with authorities in Washington, the paper reported.

The Capitol was stormed by a mob shortly after President Donald Trump held a nearby rally in which he once again claimed that the November election had been “stolen.”

Congress was in the midst of certifying President-elect Joe Biden’s Electoral College win when the mob smashed through the Capitol’s security, and lawmakers were scurried to secure locations.

Babbitt was apparently a staunch Trump supporter, and her social media accounts were filled with posts supporting the president. She tweeted on Tuesday, “Nothing will stop us…. they can try and try and try but the storm is here and it is descending upon DC in less than 24 hours….dark to light.”

Babbitt was remarried in 2019, according to her social media accounts. Her ex-husband, Timothy McEntee, said they served together in the Air Force, according to the Los Angeles Times.

She was the owner and operator of a swimming pool cleaning company in San Diego since 2017, according to her Facebook page.

On her Twitter profile, Babbitt described herself as a Libertarian who loved her “dude,” dog and country. She joined the platform in 2016 and had more than 5,500 followers.

Babbitt’s Twitter account showed her in a photo posed in a shirt bearing the words, “We are Q," a reference to QAnon, an organization that promotes baseless conspiracy theories, the Times reported.

On Wednesday morning, she retweeted a post that called on Vice President Mike Pence to resign and then be charged with treason.

Pence, who was overseeing the certification in the Capitol, had refused Trump’s demand that he ignore the tally and declare Trump the victor.

Lindsay Watts, a reporter with the Fox affiliate in Washington D.C., said in a tweet that Babbitt’s mother-in-law told her, “I really don’t know why she decided to do this.”

Babbitt was a security forces controller who enlisted in 2004, according to service records released by the U.S. Air Force and posted to Twitter by a reporter from Buzzfeed News. She left active duty as a senior airman in 2008. She served overseas, including a stint in Iraq, as part of the war on terrorism. She then served in the Air Force Reserves and Air National Guard before completing her military service in late 2016.