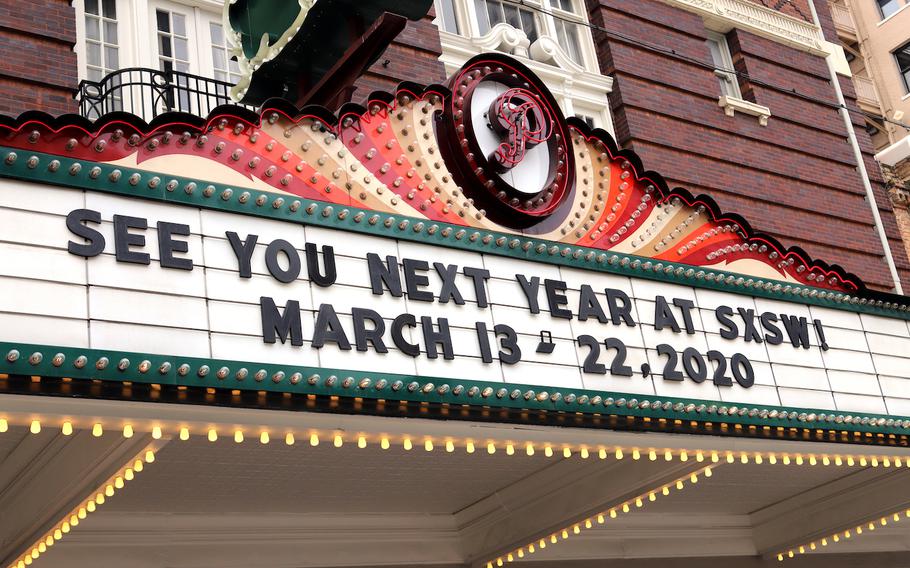 A message on the marquee at the end of last year's SWSX festival proved to be wishful thinking, as the coronavirus put an end to this year's event. (Shelley Hiam/SXSW)

AUSTIN, Texas – Two innovation-focused units, Army Futures Command and the Air Force’s AFWERX, had events scheduled during the South by Southwest conference, which was slated to begin Friday in Austin but was canceled due to concerns of spreading coronavirus.

The technology, music and film festival that occurs each March and officials in both Austin-based units are working through what the cancellation means, aside from the lost opportunity to reach thousands during the 10-day conference.

On Friday afternoon, the city of Austin and Travis County declared a local state of disaster related to the spreading outbreak of the new coronavirus, despite no known cases in the region. The declaration included mitigation plans for large-scale events and forced the cancellation of the SXSW festival, which has occurred downtown for 34 years and draws more than 100,000 people from across the globe.

Outside of the seven panel discussions AFWERX had planned, it had two pre-festival events that it will reschedule. AFWERX was established in 2017 in Washington, Las Vegas and Austin. It serves as an Air Force innovation team that functions more like a tech startup company to engage problem-solving ideas from communities outside of the service to improve Air Force capabilities.

The Spark Collider and Pitch Bowl, scheduled for Tuesday and Wednesday in Austin, were designed as matchmaking events to connect stakeholders across industry, academia and government to accelerate the Small Business Innovation Research. Secretary of the Air Force Barbara M. Barrett and Vice Chief of Staff of the U.S. Air Force Gen. Stephen W. Wilson were among the expected attendees.

The events have now moved to a one-day virtual forum scheduled for Thursday, according to a release from AFWERX. Details should be finalized and posted online by Tuesday afternoon.

“Although we are saddened to cancel an event with so many incredible companies, airmen and joint service members who were planning to attend, we ultimately made this decision for the health and safety of our staff, our guests and the community,” said Lt. Col. Matthew Scott, AFWERX Austin director.

AFWERX, as well as Army Futures Command, has office space inside Austin’s Capital Factory, which is an accelerator and coworking space for startup companies. It has positioned itself as a facilitator between startups and the Defense Department through its Center for Defense Innovation.

Throughout the rest of the SXSW festival lineup were a handful of other military-related discussion panels and events that included current and former service members and DoD personnel. Topics ranged from music therapy for veterans, potential uses of cannabis in the military and a panel on research and development decision-making featuring the deputy commander of Futures Command, Lt. Gen. James Richardson.

“We acknowledge and respect the decision of the city and event organizers to cancel SXSW out of an abundance of caution,” said Col. Chad Carroll, spokesman for Futures Command. “We will continue to be good partners to Austin and the central Texas region – in particular as they deal with impacts from not hosting this event.”

A movie about the 2009 Battle of Kamdesh in Afghanistan titled “The Outpost” was slated to premiere during the SXSW film festival. The battle resulted in two soldiers receiving the Medal of Honor, and the movie was directed by Army veteran Rod Lurie. A new premiere date for the film has not been announced.