Wearable tech could be a challenge for US military, experts say This Strava heatmap shows that plenty of people exercise at Yokota Air Base, home of U.S. Forces Japan in western Tokyo. (Strava screenshot)

This Strava heatmap shows that plenty of people exercise at Yokota Air Base, home of U.S. Forces Japan in western Tokyo. (Strava screenshot) Type “Ramstein Air Base” into Strava’s “Global Heatmap” and you get an outline of the installation in Germany showing plenty of folks running around a flight line used by military planes assigned to the 86th Airlift Wing. (Strava screenshot) 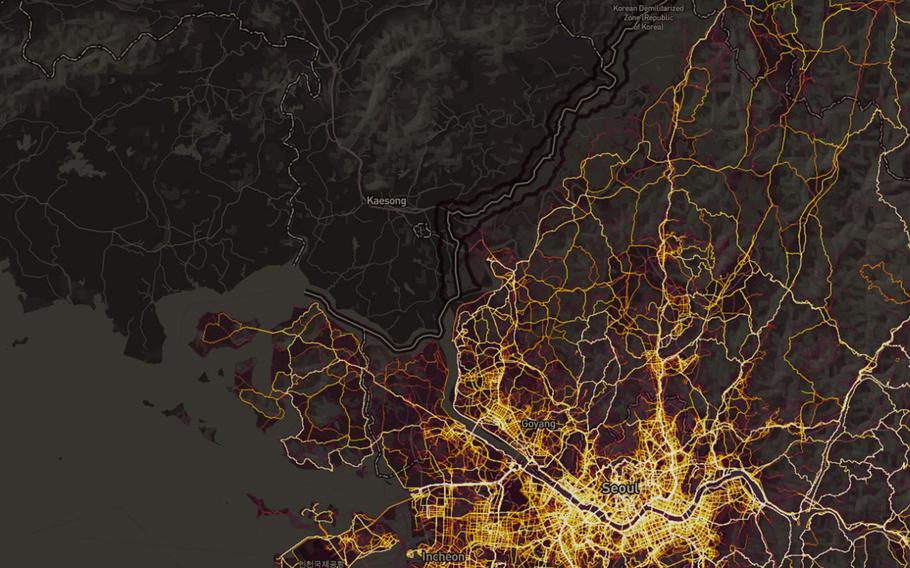 The expanse of black on Strava’s “Global Heatmap” shows few North Koreans use fitness trackers, unlike the people in the south. () 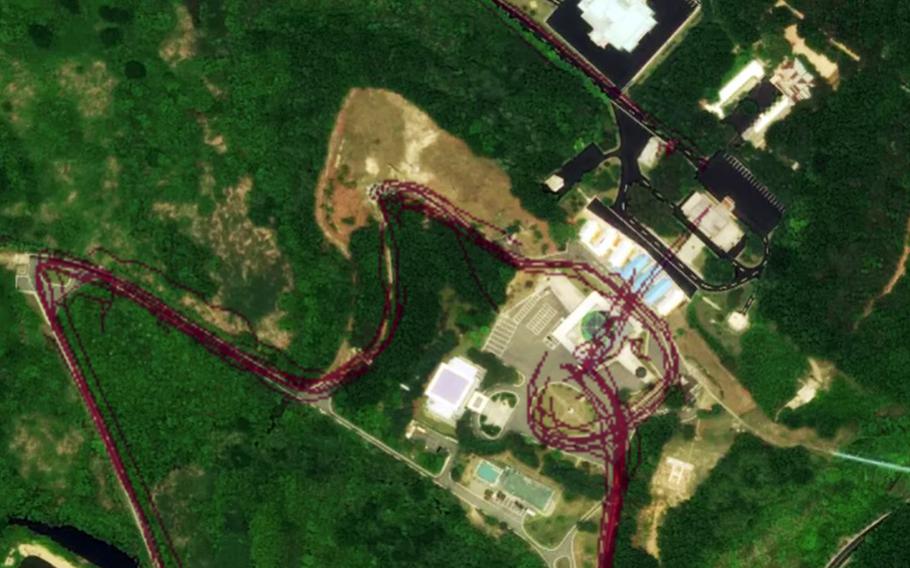 This screenshot of Strava's "Global Heatmap" shows activity at the Joint Security Area of the Korean Demilitarized Zone. (Strava screenshot)

Bright lines on a “Global Heatmap” published online by a popular fitness app show plenty of people working out inside U.S. bases near the Korean Demilitarized Zone.

They’re a sharp contrast to the expanse of black on the map to the north. Communists, it seems, don’t often wear fitness trackers outside of the North Korean capital, Pyongyang.

Revelations this week that servicemembers’ devices can be tracked, and even identified, inside secure facilities worldwide have prompted a Pentagon review.

It’s simple for anyone to conduct their own analysis of activity at U.S. bases using the fitness app maker Strava’s online map.

Type in “Ramstein Air Base,” home of U.S. Air Forces in Europe near Kaiserslautern, Germany, and you’ll get an outline of the installation showing plenty of people running around a flight line used by military planes assigned to the 86th Airlift Wing.

Zoom in on Marine Corps Air Station Iwakuni, home of America’s first forward deployed F-35B stealth fighters in Japan, and you’ll see that quite a few people wearing fitness trackers have been moving around just offshore.

In the Middle East, lines on Strava’s map surround airports that served as U.S. military hubs during the occupation of Iraq, suggesting people with fitness trackers are still there.

Glowing squares the size of football fields around Mosul, Iraq’s second largest city that was liberated from the Islamic State group last year, could mark forward operating bases where personnel have limited space to work out.

It was reported Wednesday that Defense Secretary Jim Mattis had ordered a review of the use of personal electronic devices — ranging from small fitness trackers to smartphones and tablets — that could lead to a ban on the use of nongovernment cellphones at the Pentagon.

“DOD takes matters like these seriously and is reviewing the situation to determine if any additional training or guidance is required, and if any additional policy must be developed to ensure the continued safety of DOD personnel at home and abroad,” he said.

The military hasn’t issued guidance to servicemembers in Japan about fitness apps, he said.

“We will continue, however, to remind all of our servicemembers of the importance of protecting both their personal data online as well as safeguarding information that could compromise personal and operational security,” Hutcheson said.

“We all participate in annual training for all DOD personnel that addresses operational security and social media use,” he said. “We will take any additional guidance on this issue from the Department of Defense and implement accordingly.”

Data from fitness trackers is part of a realm of intelligence and counter-intelligence that’s growing as wireless devices proliferate, David Johnson of the Center for Advanced Defense Studies in Washington, D.C. said in a Thursday phone interview.

“This is going to be an unavoidable side effect of the internet of things,” he said, referring to the spread of wireless technology to everyday items other than computers and smartphones.

For example, adversaries might use wearable devices to track soldiers on a patrol, Johnson said.

“It is a blue force tracker on everyone that the enemy can read,” he said, comparing fitness devices to a system the Army uses to track its vehicles on the battlefield. “It requires considerable discipline from units to make sure the devices don’t go where they’re not supposed to go.”

In some parts of the world there’s a risk that the enemy might use information from fitness trackers to plan mortar attacks on U.S. facilities at times when they would be most effective, Johnson said.

“The world has changed and open data is available to more people than you would imagine,” he said, noting that it’s simple to go online and track the transponders of ships at sea.

Even switching off electronic devices can reveal things to adversaries, said Johnson, noting that it’s easy to spot secure facilities around Washington, D.C. because people entering them have to turn off their devices.

“We are going to have to be much more aware of our wearable devices and the behavior of people in the signals realm,” he said.

The military is struggling with many issues related to new technology and social media that adversaries could use with the help of artificial intelligence to target individual servicemembers, Arizona State University engineering professor Braden Allenby told Stars and Stripes in an email.

“During the last American election, for example, servicemembers were targeted by political advertisements on social media platforms such as Facebook by the Russians based on their profiles,” he said.

Allenby said the Defense Department might respond with more restrictions on personal electronics and a review of potential new vulnerabilities, but added that won’t be an easy job in an era where new technology is rapidly emerging in the civilian world.