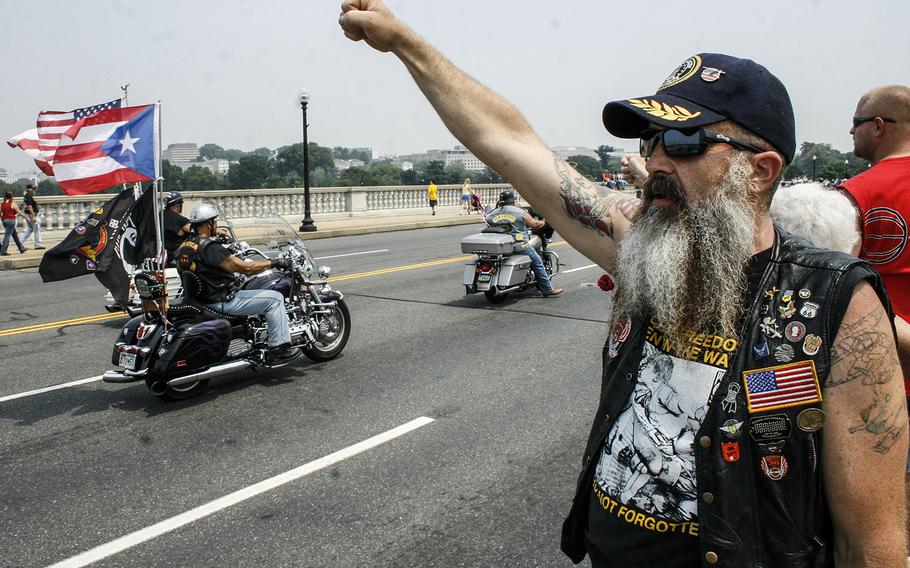 In a May, 2007 photo, a spectator cheers Rolling Thunder riders along as they cross into the District of Columbia. (Stars and Stripes)

WASHINGTON — Tens of thousands of motorcyclists will gather in downtown Washington on May 30, shutting down the streets around the National Mall for about 15 hours to conduct a traditional Memorial Day ride.

In a change from previous years, the riders will be staged on the roads around the National Mall, rather than at the Pentagon parking lot. The Defense Department barred the motorcyclists from gathering at the Pentagon this year, citing the ongoing coronavirus pandemic and the size of the expected crowd. Organizers are preparing for up to 100,000 motorcycles and nearly twice as many people.

AMVETS, the national veterans’ group organizing the ride, is working with the Metropolitan Police Department to stage riders in downtown Washington. Roads will be closed starting at 1 a.m. May 30 until the ride is over about 4 p.m.

Using the roads around the National Mall was the group’s second backup option. After the Pentagon fell through, AMVETS attempted to host the riders at Robert F. Kennedy Memorial Stadium in northeast Washington. However, the D.C. government never responded to the permit request.

“We’re not worrying about where we’ve been, we’re focused on the plan now,” said Joe Chenelly, national executive director for AMVETS. “We decided this is too important to not do it.”

The ride, called Rolling to Remember, aims to raise awareness for prisoners of war and troops still missing in action, as well as the issue of veteran suicide. It was planned as a replacement for the annual Rolling Thunder event, which was held every Memorial Day weekend for 32 consecutive years before ending in 2019.

Last year’s event was canceled because of the pandemic. Chenelly said that AMVETS is working to make this year’s event safe, despite ongoing risks.

Motorcyclists will be staged six feet apart, and riders will be asked to wear masks in situations where socially distancing isn’t possible, he said. The group is also training “Covid marshals” who will encourage social distancing and mask wearing. AMVETS has about 200,000 masks to give away the day of the event.

The staging area will be smaller than it would’ve been at the Pentagon or RFK Stadium, Chenelly said.

“The Pentagon’s decision and the indecision from the Homeland Security and Emergency Management Office of D.C. has made it more difficult to keep it safe by continuing to drive it into a smaller space,” Chenelly said.

The relocation is also costing the group more money. AMVETS will pay about $200,000 to host the ride this year, including the cost of portable restrooms, water stations and barricades around the National Mall. The Pentagon would’ve charged about $100,000, which accounts for overtime for the Pentagon police, as well as the presence of emergency medical, fire and rescue personnel.

The biggest drawback of the plan will be the inconvenience for people who live around the National Mall and those who want to visit over Memorial Day weekend, Chenelly said.

“We don’t want to block people from the mall,” he said.

AMVETS plans to release more information this week about the route of the motorcycle ride and the exact location of the staging area.