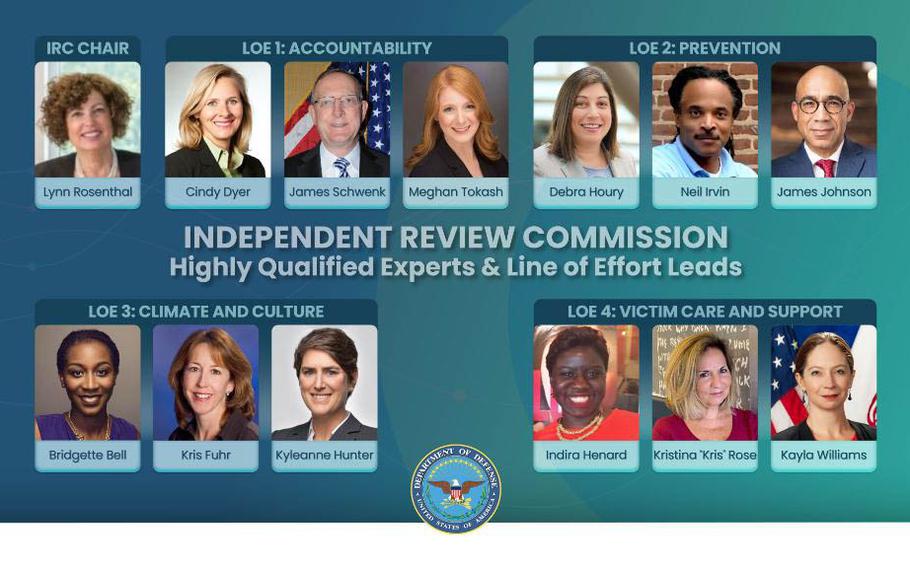 WASHINGTON — Military veterans and experts on violence against women are among the 12 new members of the Pentagon’s Independent Review Commission on Sexual Assault in the Military, the organization’s chairwoman announced Wednesday.

“I think that these folks who we're bringing in will be looking at this with fresh eyes,” Lynn Rosenthal said during a news briefing at the Pentagon.

The 12 members are split into four “lines of effort”: accountability, prevention, climate and culture, and victim care and support. The commission is made up mostly of women and slightly more than half of the members are veterans, according to Rosenthal.

They include military academy graduates, prosecutors, and victim advocates, according to member biographies on the Pentagon’s website regarding the commission.

The organization’s first meeting was held Wednesday and was attended by Defense Secretary Lloyd Austin as well as Gen. Mark Milley, the chairman of the Joint Chiefs of Staff.

“Sexual assault and sexual harassment in our military remains a significant problem, but we are taking action,” Austin said in a series of tweets about the commission. “Their recommendations will be taken with the utmost gravity, and I look forward to reviewing them upon completion.”

The commission was formally announced Feb. 26 following an order from President Joe Biden to establish the organization to find solutions to sexual assault and sexual harassment in the military. Austin has tasked the top uniformed leaders for each of the Defense Department’s five military services to submit internal reviews of each service’s prevention policies and also asked the undersecretary of defense for personnel and readiness to find data and information on the latest initiatives for preventing violence.

At the same time the commission’s members were announced, the Senate Armed Services Committee was holding a hearing with victim advocates and experts on sexual assault in the military. Sen. Kirsten Gillibrand, D-N.Y., was skeptical that another commission on the subject would really fix the problem.

“Not one of these steps has reduced sexual assault within the ranks. We are right where we started. Nothing has changed,” she said in her opening remarks.

But at the Pentagon, Rosenthal highlighted the untapped expertise and experiences that the members bring to addressing military sexual assault.

Along with the 12 executive members, the commission has an “advisory support team” consisting of senior Pentagon leaders, including members of the Joint Staff and the acting service secretaries. In addition, each “line of effort” has a working group made up of Defense Department leaders and subject-matter experts for the military services.

These working-group consultants are meant to converse and inform the executive members on what is happening now within the department, but they are not making decisions for the commission, Rosenthal said.

The initial recommendations from the commission will be submitted within 60 days, Rosenthal said in February. The aim is to look at the bigger picture rather than making changes to individual policies, which could come later during the implementation of the recommendations, she said Wednesday.

“We are about looking at major shifts, at big picture items that could really change the culture, improve care for victims, bring about evidence-based prevention, and hold offenders accountable,” she said.

The final recommendations will be given to Austin and then to Biden to review and decide on whether to implement them.

One of the issues that the commission is expected to study is the involvement of commanders in sexual assault cases, which Gillibrand has been advocating should be placed outside the chain of commands and left to independent special prosecutors.

“I'm very familiar with her view, and we're very interested in diving into her recommendations, and to carefully assessing this issue. I've always believed that this issue needed to be looked at very carefully, that we will evaluate pros and cons,” Rosenthal said.

Sexual assault survivors can now submit feedback about their experiences regarding sexual assault support services, victim advocates, or other personnel to the commission at https://www.safehelpline.org/military-feedback