'Valiant Hearts: The Great War' a touching, artistic puzzler that takes on horrors of WWI 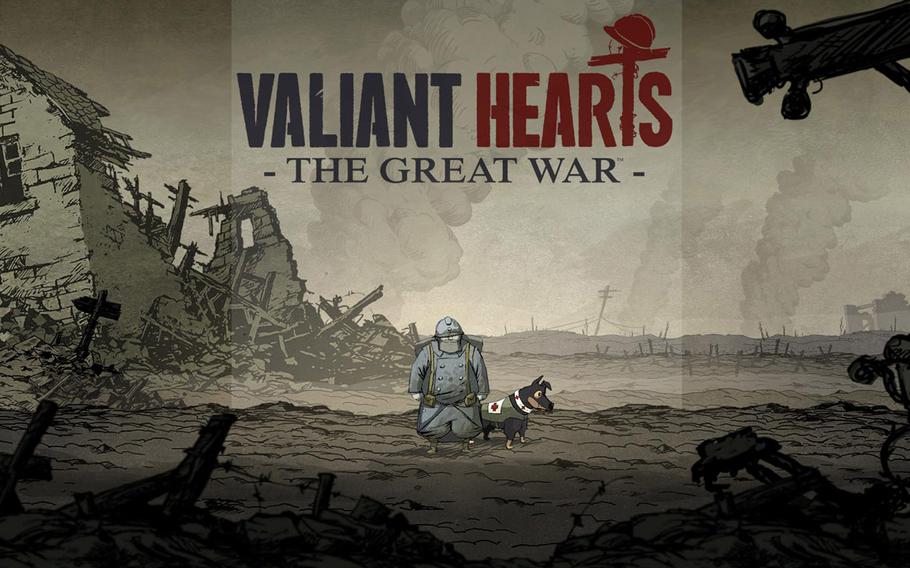 “Valiant Hearts: The Great War,” the latest game from Ubisoft Montpellier, the same studio that brought us “Beyond Good & Evil” and “Rayman Origins,” is a puzzle-packed adventure game set in the European countryside with World War I acting as the backdrop. (In-game screenshot)

“Valiant Hearts: The Great War,” the latest game from Ubisoft Montpellier, the same studio that brought us “Beyond Good & Evil” and “Rayman Origins,” is a puzzle-packed adventure game set in the European countryside with World War I acting as the backdrop. (In-game screenshot) 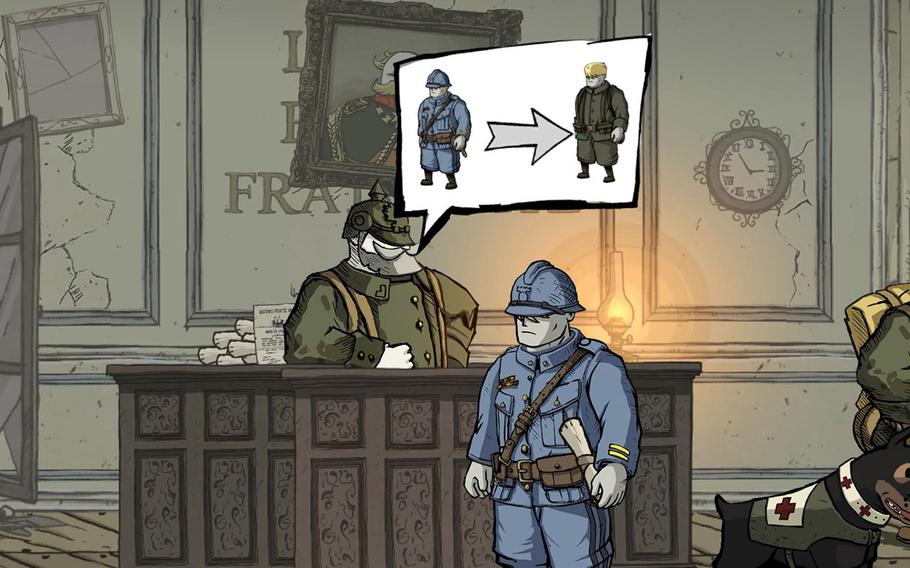 The dialogue between characters is handled through pictographs that double as mission objectives and clues. ( In-game screenshot ) 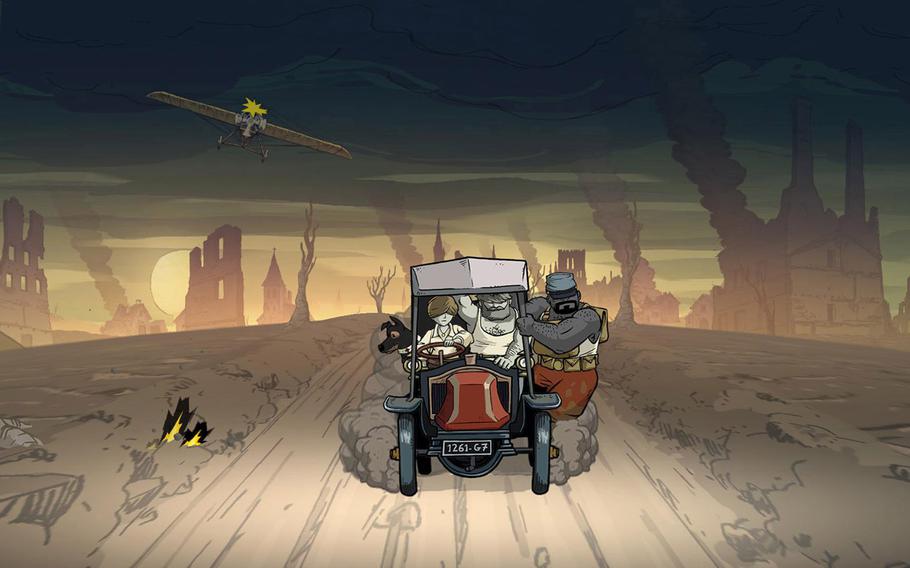 The puzzle elements make up the bulk of the game, but there are a few action setpieces scattered throughout that help break up the routine. ( In-game screenshot ) 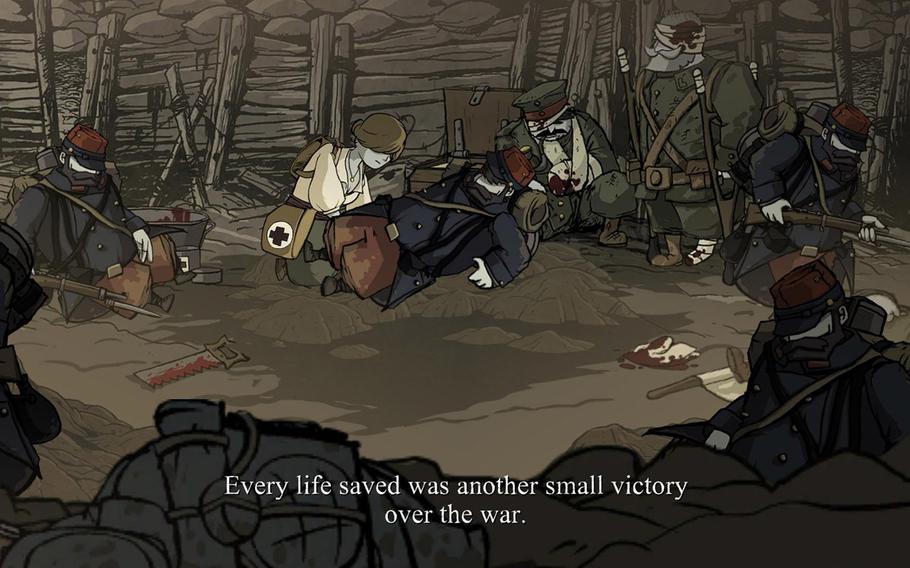 Anna, the medic and sole playable women character, spends much of her time trying to save the lives of the wounded around her. ( In-game screenshot ) 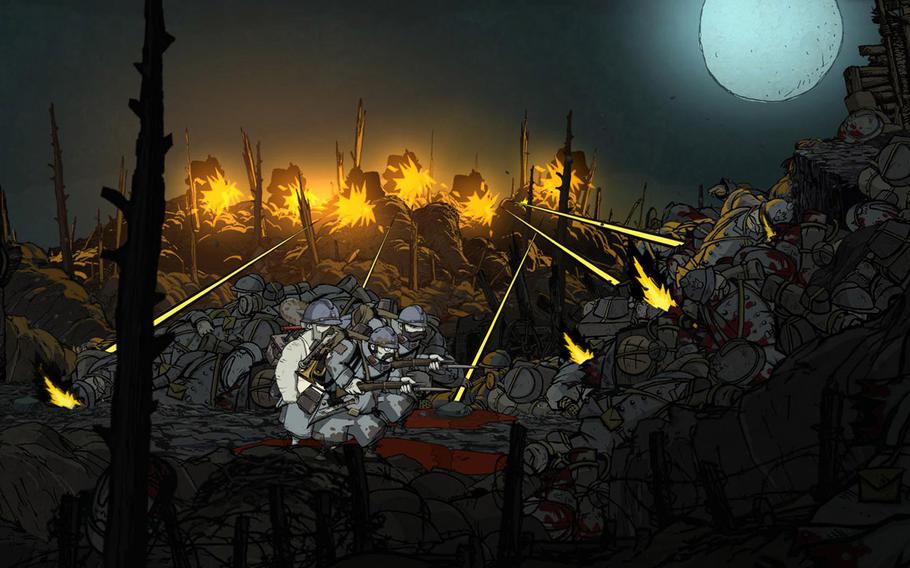 "Valiant Hearts: The Great War" doesn't shy away from showing the bloody consequences of war, even if the cartoony graphics mitigate the impact somewhat. ( In-game screenshot ) 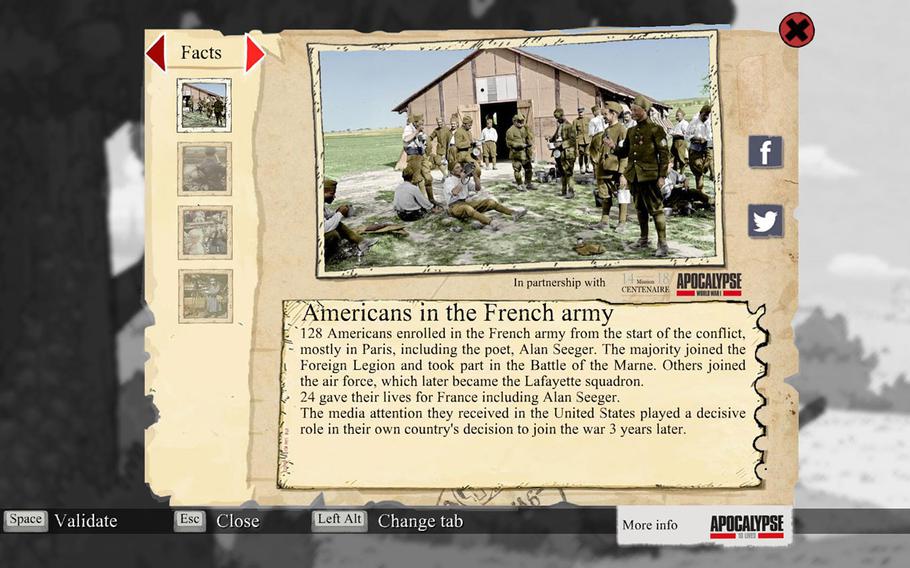 Each chapter features background information on the battlegrounds that inspired the levels, puzzles and plot. Exploration will net keen-eyed players war artifacts, each with their own histories that can be read from the pause menu. ( In-game screenshot )

“Valiant Hearts: The Great War,” the latest game from Ubisoft Montpellier, the same studio that brought us “Beyond Good & Evil” and “Rayman Origins,” is a puzzle-packed adventure game set in the European countryside with World War I acting as the backdrop.

Like most of their recent games, “Valiant Hearts” is a game that takes a fair amount of chances — from the setting, to the art style, to gameplay itself. There aren’t too many video games based around World War I, and even fewer are puzzle/adventure titles. It’s also a game that subverts nearly every expectation placed upon it, to the benefit of any gamer who gives this new title a chance.

At first glance, "Valiant Hearts" appears to be a comedy. The cartoony visuals, powered by the eye-opening UbiArt Framework engine, are initially used to render cute caricatures of the main characters, but eventually are used to depict some truly horrific images of trench warfare. The story unfolds in a similar manner, with the opening chapters reflecting the relative optimism of the characters, and then subsequent chapters showing that cheerfulness slowly fading away as the war progressed. There are moments that will make you laugh and there are moments that will bring to mind how terrifying warfare would have been when mustard gas attacks were commonplace.

The focus on four characters help convey a uniquely human element, as their stories intertwine throughout the years of the war. Anna, the medic introduced partway through the venture is most often used as a plot device, but the other three — Karl the unwilling German conscript, Emile the duty-bound Frenchman and Freddie, the American freelancer out for revenge – have well-defined motives that helped move the story along.

Their story is told through narration at the beginning of each chapter, which also happens to be only dialogue in the game. The rest of the interaction between characters is shown through a series of pictographs, which also serve as the backbone for the puzzle-heavy gameplay. Each chapter begins with a series of obstacles to overcome and the pictographs are the clues. For instance, a soldier will “speak” with an image of a sock and you’ll have to solve a series of puzzles in order to get him not only a sock, but a clean, dry one as well.

There are some action sequences interspersed through “Valiant Hearts,” most notable being a few driving sequences that sync up with the music beautifully, but the vast majority of the game revolves around solving puzzles to get from point A to point B. None of the puzzles are particularly hard, which may or may not be a positive for some players. I found most of them to hit a nice balance in the difficulty level, but more seasoned puzzle fans may find them too simplistic. Truth be told, I was happy to have puzzles that provided some challenge, but that didn’t get in the way of the storytelling. In fact, most of the puzzles helped reinforce the story.

For example, the aforementioned sock puzzle, combined with the detailed visuals, illustrates the terrible living conditions soldiers faced in the trenches. Troops in WWI went through extreme measures to keep their feet dry, as the alternative often lead to amputation. A bit dark, to be sure, but “Valiant Hearts” does a decent job of trying to keep the reality of the war in the forefront of the story.

The locations in “Valiant Hearts” take inspiration from the real battlefields of Western Europe, and at each new location, new colorized photos and historical context from the war are unlocked. Exploration opens up short histories on WWI artifacts. These can range from recruiting posters to the decidedly unhygienic genesis of the gas mask. When the credits rolled, I knew more about the First World War than I had before the game began and I was still entertained every step of the way.

That’s not to say the game is strictly historical. The historical aspects often butt against some of the more cartoony elements, like the evil Baron and his decidedly unhistorical giant tank. The main characters happen to run into each other as the most opportune times and there are many moments that stretch credulity, even within the frame of the story being told. The game features an incredibly intelligent dog doing things cartoon animals have been doing in Saturday morning cartoons for decades, and then shift suddenly to imagery of mountains of corpses. That doesn’t really detract from the game, but it’s worth noting for people who may are sensitive to drastic tonal shifts, as “Valiant Hearts” is full of them.

The game is priced at $14.99, an appropriate price for its length. I finished the game in two sittings, which could be an issue for some. Personally, I found the story and production values to be well-worth the price of admission. I can easily recommend “Valiant Hearts: The Great War” to gamers who value quality storytelling, fans of puzzle games in general and anybody who may be looking for something a little to the left of ordinary.

Bottom line: While a little short, “Valiant Hearts: The Great War” does a great job of using a refreshing take on the puzzle genre in order to tell an emotionally resonant story.