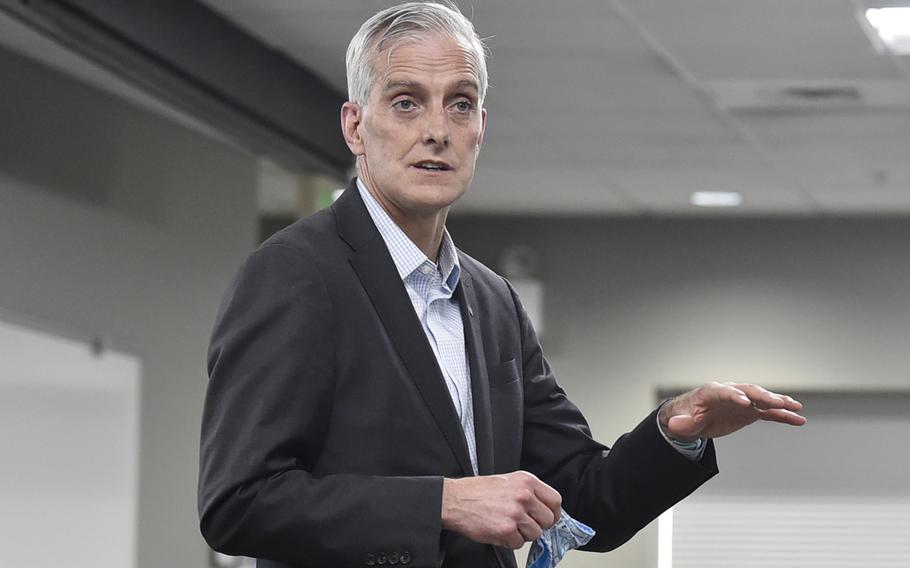 Veterans Affairs Secretary Denis McDonough attends an event at Fort Harrison in Helena, Mont., on April 7, 2021. McDonough on Wednesday, April 14, led hundreds of employees in a pledge against domestic violence and sexual harassment and assault. (Thom Bridge/Independent Record via AP)

WASHINGTON — Department of Veterans Affairs Secretary Denis McDonough led hundreds of employees Wednesday in a pledge against domestic violence and sexual harassment and assault, vowing to never “commit, excuse or stay silent” about the behavior.

The pledge was part of the White Ribbon campaign, a worldwide movement that asks men and boys to help end gender-based violence and promote gender equity.

“Sexual assault is at its core a devastating abuse of power,” McDonough said. “Little can destroy institutional trust faster and more painfully than sexual harassment or assault, and I won’t tolerate it.”

McDonough, who became the VA secretary in February, inherited a department rife with issues regarding sexual harassment.

In December, the VA Office of Inspector General found that former VA Secretary Robert Wilkie mishandled a claim of sexual assault at the VA hospital in Washington. Wilkie and other VA leaders openly attempted to discredit the woman who made the claim. They asserted the woman, an aide in the House of Representatives, had political motives.

Following the findings, the country’s largest veterans’ service organizations urged Wilkie to resign. He ignored the calls and remained in his position until President Joe Biden took office.

Earlier in 2020, the Government Accountability Office reported that an estimated 14% of male employees and 26% of female employees at the VA experienced sexual harassment – high percentages among federal agencies. The department has “inconsistent and incomplete” policies to prevent and address harassment, the GAO found, and the VA isn’t collecting enough data about allegations. Required training for VA employees lacks information about identifying and addressing sexual harassment.

When McDonough took over, more than 50 House members sent him a letter asking him to protect veterans against sexual harassment and assault and increase accountability inside the agency.

On Wednesday, McDonough addressed the importance of open communication among VA employees about harassment and assault.

“This pledge has to be more than words we speak,” he said. “It has to be the example we set, the standard we abide by, and it has to be the communication we have as an organization where we have respect for each other.”

Hundreds of leaders at VA facilities across the nation joined in on the pledge, and McDonough encouraged them to have their employees take it, as well.

Also on Wednesday, McDonough established a task force to find solutions to improving inclusion, diversity, equity and access at the VA. The task force, with 17 members, is supposed to provide concrete recommendations by July 31.

“The task force recommendations will aim to eliminate barriers so that all veterans have equal treatment and experiences when interacting with VA,” the department said.