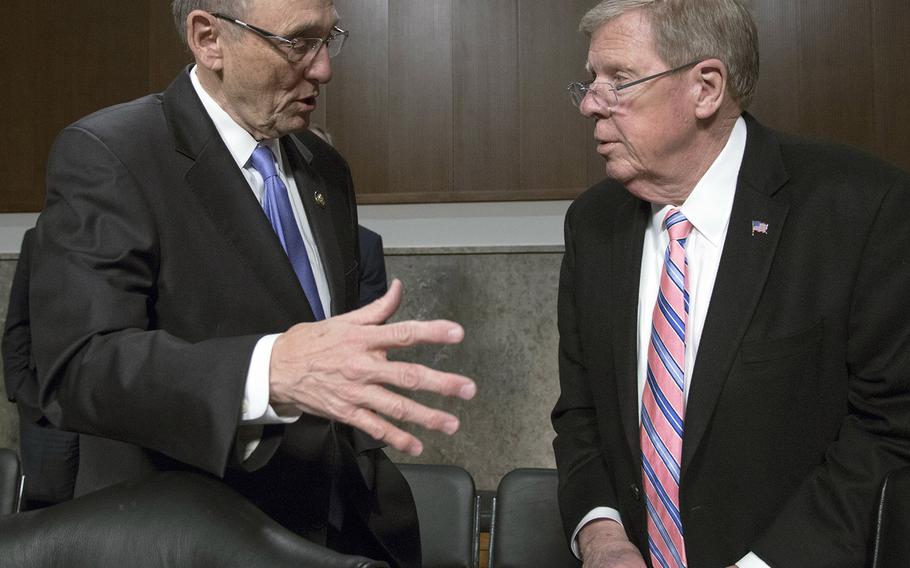 WASHINGTON — A deal collapsed Wednesday to include multiple Department of Veterans Affairs reforms in a spending bill that Congress formulated to prevent a government shutdown.

Earlier this week, the bill was set to contain a measure to overhaul the VA Choice program, which veterans use to access private-sector medical care. A deal reached between key House and Senate lawmakers on VA oversight also included an expansion of benefits for veteran caregivers, as well as a plan to initiate a systematic review of VA infrastructure, with the intention of disposing of aging and underused facilities nationwide.

When Congress unveiled its $1.3 trillion, 2,232-page bill Wednesday evening, the VA reforms had been omitted.

Sen. Johnny Isakson, R-Ga., and Sen. Jon Tester, D-Mont., leaders on the Senate Veterans’ Affairs Committee, predicted earlier Wednesday that the reforms would not be included in the final version of the spending bill.

Tiffany Haverly, a spokeswoman for Rep. Phil Roe, R-Tenn., the chairman of the House Committee on Veterans’ Affairs, said Roe’s team worked to push for the VA reforms up until the bill was released.

House Democrats were opposed to the deal.

Griffin Anderson, a spokesman for Democrats on the House Committee on Veterans’ Affairs, said they were against a measure to expand caregiver benefits because it didn’t provide a clear way to fund those changes.

Benefits such as monthly stipends, respite care and counseling are now only available to caregivers of veterans injured after the 9/11 terrorist attacks, which veterans and advocates say creates an unfair discrepancy. Changes to eligibility have been stalled for years in Congress because of the high cost of expanding benefits to more families.

For Democrats, expanding the benefits is a top priority, but not without funding, Anderson said.

“Yes the program would be authorized, but there would not be any money to fund this expansion,” he wrote in an email.

Democrats also worried a measure to create an asset-review commission tasked with making decisions on VA facilities would severely limit Congress’ authority to oversee VA infrastructure. They argued the measure didn’t include funding to pay for infrastructure improvements.

Arguably the most pressing measure — and most debated — is the proposed change to the Choice program.

House Democrats believe the Choice overhaul included in the deal isn’t enough of a revamp from the current program, Anderson said.

The Choice program was created in 2014 in response to the VA wait-time scandal to ease demand on VA services by sending veterans into the private sector.

Negotiations of potential changes to the program have created disagreements and delays in Congress and highlighted divisions between VA leadership and White House insiders. The option of more choices in health care for veterans was a promise that President Donald Trump offered during his election campaign. The crux of the dispute is how far veterans’ health care should be pushed into the private sector.

Everyone involved in negotiations seems to agree the next iteration of the program should do away with the rules that allow veterans to go into the private sector only when they live more than 40 miles driving distance from a VA facility or have to wait longer than 30 days for an appointment.

But House Democrats think the Senate’s proposal — the one intended for inclusion in the spending bill — “makes virtually zero changes to eligibility from the current, arbitrary 30-day, 40 mile rule,” Anderson said.

The measures also had the backing of eight large veterans organizations, all of which signed onto a letter to congressional leaders Monday encouraging the deal. They described the moment as a “historic opportunity” to pass multiple VA reforms at once.

On Wednesday afternoon, when it appeared the deal was falling apart, Carlos Fuentes, legislative director for the Veterans of Foreign Wars, said his organization was disappointed the VA reforms wouldn’t make the cut. The possibility of delaying the measures until summer or fall would be “unacceptable,” he added.

Isakson said he wants to try again to pass the measures when lawmakers return from break in April. It’s uncertain, though, when the issues could be taken up again. The reforms were each previously introduced in Congress as separate bills, but all of them have been deadlocked in recent months.

The spending bill would have provided a fast-track for their approval.

“I would’ve liked to get it in there,” Isakson said. “But the effort we’ve gone to has gotten everybody educated on the great job we’ve done to address three major concerns in the VA, so I think we’ll get it done. Obviously, I’d love for it to be in the omnibus and be over, but it’s a step forward in terms of what we’re going to do with it.”

The massive spending bill was delayed this week, held back by several hot-button initiatives vying to be tacked on as policy riders. Lawmakers must act by the end of Friday to avoid a partial government shutdown. The House approved the bill Thursday morning. The Senate must approve it before it’s sent to the White House for Trump to sign.