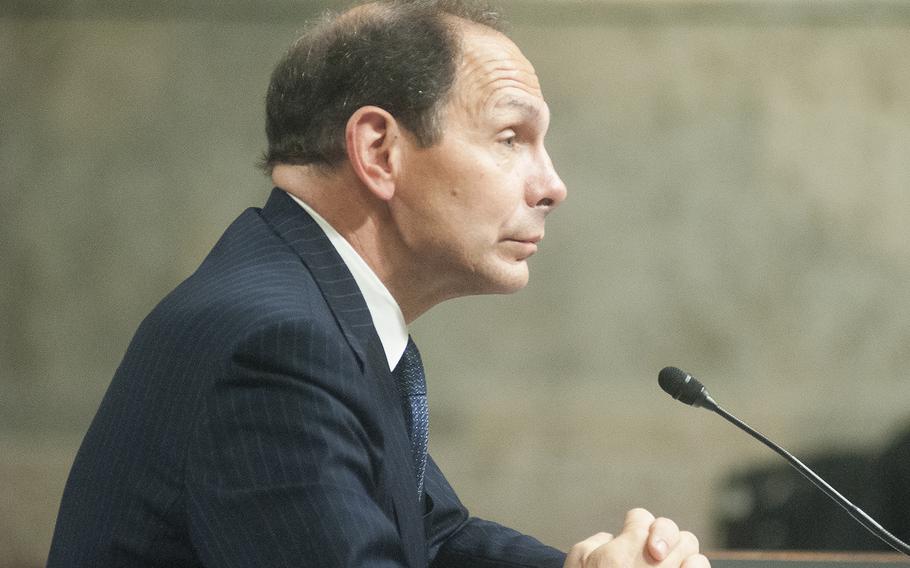 Buy Photo
At his confirmation hearing July 22, 2014, then Secretary of Veterans Affairs nominee Robert McDonald listens as members of the Senate Committee on Veterans Affairs ask him questions. (Carlos Bongioanni/Stars and Stripes)

The Veterans Choice, Access and Accountability Act of 2014, which Congress rushed to pass last summer to address a patient wait-time scandal at dozens of VA hospitals and clinics, spurred VA to broaden access to care.

Turns out it did so largely through use of existing and often costly contract authorities and partnerships for non-VA health care with local communities rather than the new, more complex Choice Card plan.

The result was seven million new health care appointments for veterans the past year, but also a flood of new enrollees into VA care, an accounting nightmare for health care administrators and a surprising budget shortfall, which VA officials concede they failed to forecast and which angry lawmakers realize they must repair before going on August recess.

If not, VA leaders warn, VA medical facilities will shut their doors.

VA Secretary Bob McDonald came before the Veterans Affairs Committee on Wednesday to explain why VA needs emergency authority to shift $3 billion from an account fenced for the Choice Card program, and use it instead for other burgeoning community care costs, plus a $500 million tab VA faces to buy new wonder drugs for treatment of late-stage Hepatitis C.

If denied flexibility to access Choice fund, McDonald said, “we will have no option at the end of July but to defer all remaining non-Choice-care-in-the-community authorizations until October, provide staff furlough notices, and notify vendors we cannot pay them as we begin an orderly shutdown of hospitals and clinics across the country.”

McDonald issued his blunt warning knowing he had support of the nation’s largest veteran service organizations for the funding shift. VSO leaders had written in the past week to Rep. Jeff Miller, R-Fla., chairman of the House Veterans Affairs Committee, and other chairmen and ranking members of key congressional committees urging swift transfer of funds to avoid any interruption in veterans’ health services. They largely praised McDonald for expanding access to care without regard to cost.

By Tuesday, Miller and Rep. Charlie Dent, R-Pa., chairman of the appropriations subcommittee on military construction and veterans’ affairs, released a joint statement citing “blatant mismanagement” at VA for the surprise budget shortfall. But they added their assurances “that no veterans will be denied the care they need and deserve.”

Two weeks ago, they angrily added, the VA “couldn’t tell Congress it would be shutting down hospitals next month. No viable organization can function this way. The VA’s continued lack of transparency and refusal to be forthright with Congress and the American people is unacceptable.”

Miller continued to disparage McDonald and his team in opening his hearing, saying “never before can I recall VA – or any agency – completely exhausting its operational funds prior to the end of the fiscal year, with the consequences for VA being the cessation of hospital operations.”

Though vowing to protect veterans once more from VA management failures, Miller also warned “the days when VA can come to Congress and just say ‘Cut us a check’ are gone.”

McDonald was unapologetic. He said Congress shares blame for the budget shortfall. It passed the Choice Act promising to reduce veterans’ wait times for care, so McDonald decided to manage his department to address those pressing care requirements rather manage to a hobbled budget.

Still, he said, VA would have been able to give more timely warning of a budget shortfall except for another provision of Choice Act that forced VA to consolidate accounting processes for seven different community care programs under a single central office. That hampered VA’s ability to track rising non-VA or community care costs using regional budget expertise resident at VA medical centers, even as those centers were urged to refer many more patients to outside providers to ensure timely access to care.

“When you passed the Choice Act you demanded…that we account for care in the community in a different way than we did previously,” McDonald said. “You asked us to centralize that at our business office. I’m sure you did that to keep control of that money and make sure we weren’t spending it for something else.” But “it helped to exacerbate the situation,” McDonald said.

Without medical centers monitoring community care costs, “we lost a lot of intelligence about the obligations that were being made,” added Dr. James Tuchschmidt, VA’s principal deputy undersecretary for health. Those regional experts even knew how to use VA’s “clunky” financial management system, he said. “And when we centralized that, maybe we should have anticipated some of the problems. But we didn’t.”

Instead, as VA began buying an “unprecedented volume of care” from caregivers in local communities, VA authorizations for such care were being loaded onto one computer system and cost obligations being incurred were tracked on a different system, Tuchschmidt said.

“We tried through brute force to keep that accounting whole so that we could understand what’s going on,” McDonald said. “But there’s no question that we’ve got to do a better job.”

Before Congress added the Choice program last year, VA already operated six other programs under separate authorities to provide patient access to outside care, including its Patient Centered Community Program and Project Arch (Access Received Closer to Home), a pilot program for expanding access to health care for veterans in rural areas.

What makes Choice unique is veterans living more than 40 miles from a VA medical facility or facing waits for VA care longer than 30 days get to decide themselves to use outside care. McDonald said that makes VA budgeting more unpredictable, particularly as Congress has insisted on keeping Choice dollars separate from other VA health care funding needs.

Some committee members conceded that would have to change. Meanwhile, McDonald counterpunched every charge from irate lawmakers, mostly Republicans, that mismanagement had created a VA budget crisis.