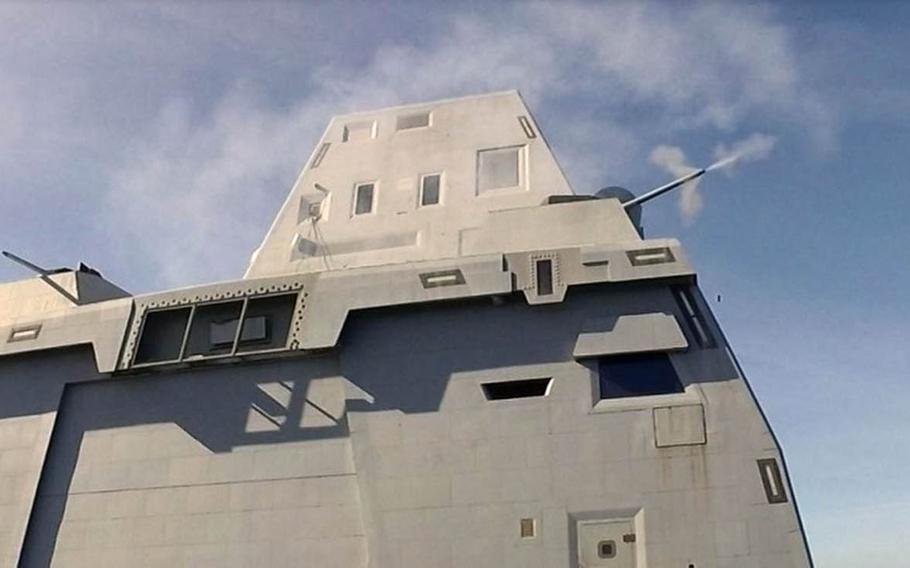 Crew and technicians aboard the USS Zuwalt test fire the destroyer's Mark 46 MOD 2 Gun Weapon System during a sea trial off Point Mugu, Calif., on May 16, 2020. (Cameron Chadd/U.S. Navy)

Sailors aboard the USS Zumwalt fired the first rounds recently from the destroyer’s high-velocity cannon, another waypoint on the ship’s segue into naval service.

The remotely operated system is comprised of a 30 mm high-velocity cannon, a laser rangefinder for shipboard self-defense against surface targets, a forward-looking infrared sensor and a low-light television camera.

“The privilege of being a ‘first-in-class’ ship includes having the opportunity to systematically conduct testing across the breadth of systems installed onboard the ship,” Capt. Andrew Carlson, Zumwalt’s commanding officer, said in a Navy statement.

“The real plus is conducting those tests, such as today’s live fire with the Mark 46 GWS,” Carlson said, “which provide tangible evidence of combat capability maturation.”

Structural test firing is required for the first ship in a class to confirm a vessel can operate safely while firing its own weapons due to the vibrations and shock caused when firing live ordnance. The test fire is also the first time a Zumwalt-class destroyer shot a large-caliber weapon.

The Zumwalt entered the fleet in April 2 ½ years after it was commissioned by the Navy in October 2016. Soon after the Zumwalt’s commissioning, Congress prohibited the Navy from taking delivery of a vessel not fully outfitted to its combat capacity, according to a USNI News report April 24.

The Navy originally planned to put 32 Zumwalt-class destroyers to sea, a number trimmed to three as the price of each ship, an estimated $8 billion, grew after 2005, according to the Project on Government Oversight, a nonpartisan, independent watchdog group based in Washington, D.C.

The high cost of munitions for the original, 155 mm main armament added to the Navy’s decision in December 2017 to change the Zumwalt’s mission from shore bombardment to surface warfare against other vessels. The destroyer, according to the Navy, is equipped for control of the sea, power projection, deterrence and command and control missions.

It is designed to operate in open-ocean and near-shore environments.

“Today’s event is the first in a chapter of live fire test events over the next year that will prove the lethal capability that these ships will bring to the fight,” Lt. Cmdr. Tim Kubisak, Zumwalt test officer, Program Executive Office for Integrated Warfare Systems, said in the statement.