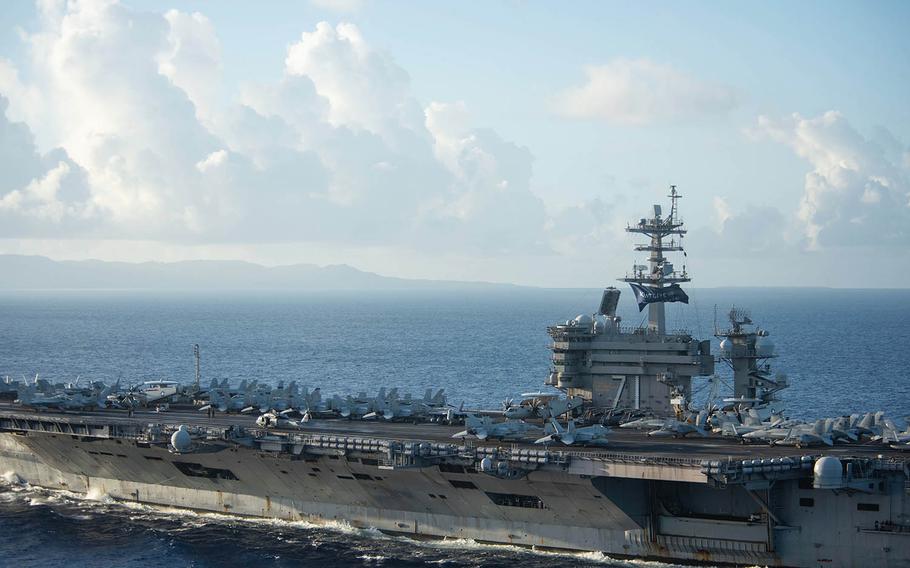 The Navy and Coast Guard are searching for a sailor from the aircraft carrier USS Theodore Roosevelt believed to have gone overboard Thursday morning off the coast of Southern California, 3rd Fleet said Friday.

The search began when a lookout “spotted what appeared to be a person in the water” Thursday at about 7:30 a.m., according to a Navy statement. The carrier immediately launched three search-and-rescue helicopters and a rigid-hull, inflatable boat in response.

A ship-wide muster discovered one sailor missing, according to the statement.

The Navy did not identify the missing sailor, but Robertson said the person’s next-of-kin has been notified, according to a Friday report by the San Diego Union-Tribune.

The public announcement of the man-overboard search was delayed until the sailor’s family was notified, according to the San Diego Union-Tribune.

The Theodore Roosevelt left San Diego on Dec. 7 for a second deployment this year, starting with conducting operations in the 3rd Fleet area, which encompasses the Pacific Ocean east of the international dateline, according to Robertson. Further details about their deployment was not provided.

It has been a trying year for the Theodore Roosevelt, which during the the summer completed a six-month Pacific deployment that included a monthlong diversion to Guam to battle a coronavirus outbreak onboard.

More than a quarter of the carrier’s crew — 1,271 sailors — ultimately tested positive and one died, according to Navy medical personnel, whose study of the outbreak was published Nov. 11 in the New England Journal of Medicine.

After returning home to Naval Base San Diego on July 9, crews went back to sea in September for carrier-landing qualifications in preparation for the current patrol.

The Theodore Roosevelt made headlines again in October when a 20-year-old seaman killed himself while standing security watch on a pier at Naval Air Station North Island near San Diego.