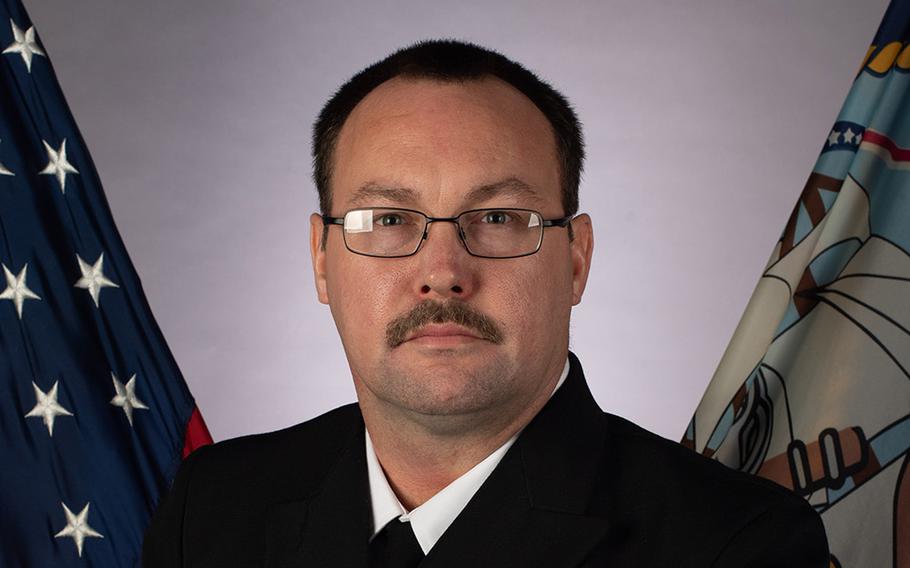 WASHINGTON — A chief petty officer from Arkansas was the USS Theodore Roosevelt sailor who died earlier this week from coronavirus complications, the Navy announced Thursday, the first death of the more than 650 confirmed cases among the crew in an outbreak that has kept the aircraft carrier docked in Guam.

Charles Robert Thacker Jr., 41, was found unresponsive April 9 while in quarantine on Guam after testing positive for the coronavirus March 30 aboard the aircraft carrier. The Roosevelt had diverted to Guam at the end of March due to an outbreak of the virus aboard the ship.

Thacker was an aviation ordnanceman from Fort Smith, Ark., and had been assigned to the Roosevelt since December. His wife, Symantha L. Thacker, is also a sailor and is stationed in San Diego. She arrived in Guam on Saturday and was by his side when he died Monday, the Navy said in a statement.

Thacker enlisted in the Navy in December 1997 and had previously served on the Roosevelt from January to July of 2016, according to career details provided by the Pacific Fleet. He also had served on the USS George Washington, the USS Ronald Reagan and the USS Constellation. Thacker’s service awards include the Enlisted Aviation Warfare Specialist badge, the Navy and Marine Corps Commendation Medal and the Navy and Marine Corps Achievement Medal.

"Our thoughts and prayers are with the family during this difficult time," Capt. Carlos Sardiello, the Roosevelt's commanding officer, said in the Navy’s statement. "Our number one priority continues to be the health and well-being of all members of the Theodore Roosevelt Strike Group and we remain steadfast in our resolve against the spread of this virus."

In 2018, she was awarded “senior sailor of the quarter” while serving on the USS Carl Vinson as an aviation ordnanceman first class, according to a Navy news release in December that year. The Oklahoma native was described as “ecstatic” about being selected.

The couple appear to have a young son and daughter in photos posted on their Facebook pages.

Thacker was an off-roading enthusiast, according to his Facebook page. Numerous photos show his Jeep Rubicon climbing mountain slopes and stone outcroppings in Death Valley and other sites in Southern California and elsewhere.

He had a passion for black-and-white photography but preferred using old-fashioned film rather than digital technology.

He was also a shooting buff. In one Facebook photo he appears prone on the ground firing a .300 Winchester magnum rifle. In comments below the photo, Thacker said he was shooting targets about 2,000 feet away and that he’d spent more than $5,000 customizing the sniper rifle.

Members of the Arkansas congressional delegation offered condolences in a statement Thursday.

“This is a great loss against an unprecedented enemy, and we must continue to amplify resources on all levels to defeat this virus and safeguard personnel,” Rep. Steve Womack, a Republican, said in the statement.

Sen. John Boozman praised the sailor’s dedication to his country and love for his family.

“[Chief] Petty Officer Thacker’s appreciation for the special things in life — particularly his loved ones and passions — reminds us how precious time really is and how this virus poses a threat to all of us, even the warriors dedicated to defending America,” the Republican senator said.

The Roosevelt’s former commander, Capt. Brett Crozier, raised alarms about the outbreak aboard the aircraft carrier with an emailed letter to other Navy officers requesting assistance for his crew as they battled the virus. Crozier warned in his letter that the outbreak could kill some sailors, and “if we do not act now, we are failing to properly take care of our most trusted asset — our sailors.”

The letter was leaked to the media and Crozier was fired two days later on April 2 by then acting Navy Secretary Thomas Modly.

Modly, who resigned amid the Roosevelt controversy, initiated an investigation into Crozier’s actions and the climate of Pacific Fleet “to help determine what may have contributed to this breakdown in the chain of command,” he said at the time.

The investigation was completed last week Defense Secretary Mark Esper said Wednesday during a television interview. Adm. Mike Gilday, chief of naval operations, is reviewing the investigation and “no final decisions have been made,” Gilday’s spokesman Cmdr. Nate Christensen said in a statement Thursday.

The nuclear-powered Roosevelt was last in port in southern Vietnam 15 days before the first coronavirus cases were evacuated from the ship. During a news conference March 24, Gilday would not connect those cases to the port visit, saying the Roosevelt has aircraft flying to and from the ship, making it difficult to determine where the infections originated.

As of Thursday, there are 655 Roosevelt sailors with positive tests for the virus. Most of the about 4,800 member crew has been tested, with 3,919 receiving a negative test result. About 4,059 sailors have been transferred from the ship to Guam.

The Navy also announced this week that six Roosevelt sailors have been hospitalized in Guam for the coronavirus, including one in intensive care for observation for shortness of breath.

Thacker was found unresponsive during a medical check at about 8:30 a.m. on April 9 and other sailors started CPR while emergency responders were notified, according to the Navy. Roosevelt sailors who are isolated receive twice daily checks by Navy medical personnel.

Of the military services, the Navy has been the hardest hit by the pandemic with 1,118 total cases.

Esper said Wednesday that once the aircraft carrier has been cleaned as a result of the virus outbreak, the ship is expected to return to sea in a few weeks.

Thacker is the second American service member to die from the coronavirus. Army Capt. Douglas Linn Hickok, 57, a physician assistant with the New Jersey National Guard, died March 28 as he was preparing to activate in response to the pandemic.