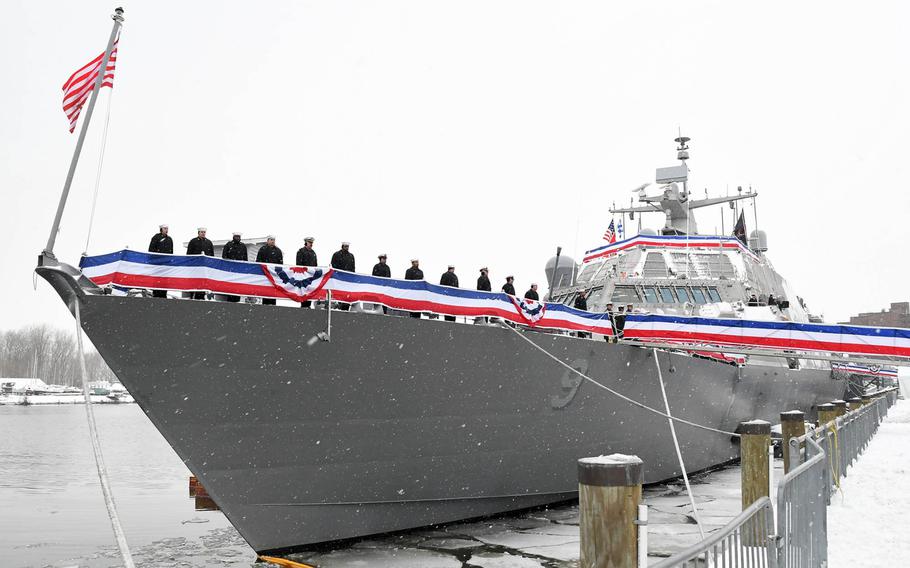 Sailors man the rails of the littoral combat ship USS Little Rock during its December commissioning ceremony in Buffalo, N.Y. (Courtesy of the U.S. Navy)

The littoral combat ship USS Little Rock is back underway after being stuck in Montreal for three months because of ice.

The Little Rock was commissioned Dec. 16 next to its namesake, the decommissioned guided-missile cruiser USS Little Rock, in Buffalo, N.Y. It was late leaving Buffalo due to wintry weather and stopped in Montreal a few days after Christmas for a port visit and minor repairs.

“The ship was ready to depart Montreal, but the extreme cold, subsequent condition of the St. Lawrence Seaway and availability of icebreakers and support ships caused the delay,” Hillson said in January.

The Little Rock was escorted down the St. Lawrence by the Canadian Coast Guard icebreaker Des Groseilliers during its Saturday departure.

“We greatly appreciate the support and hospitality of the city of Montreal, the Montreal Port Authority, and the Canadian Coast Guard,” said Cmdr. Todd Peters, the ship’s commander. “We are grateful for the opportunity to further enhance our strong partnerships.”

While laid up, two dozen members of the Little Rock’s crew helped sort donated goods at the Welcome Hall mission in Saint Henri near the Little Rock’s temporary mooring, according to a February report by the Canadian Broadcasting Corporation.

The ship’s crew could explore the city in their off-hours, and their stay was mostly uneventful.

However, residents of a condo near the ship’s mooring reportedly complained about noise from shore-side power generators.

“It’s like the motor of a large truck that’s driving at high speed,” Montreal resident Alain Stanke told The Canadian Press in March. “Those two generators are detestable.”

The Little Rock is expected to arrive in Florida by the end of the month after making several port calls.