US troops to deploy to Middle East to train Syrian rebels 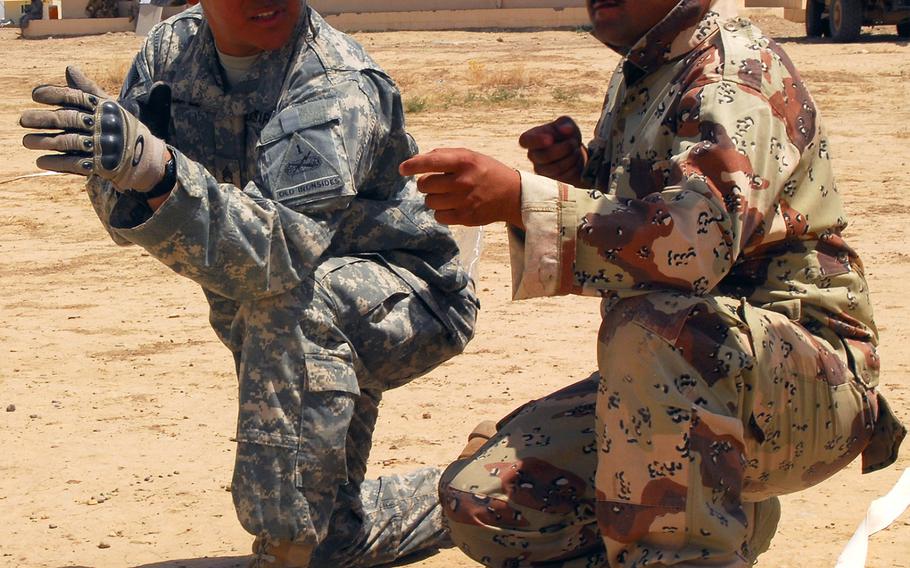 A U.S. soldier, left, shows a Peshmerga fighter which way to face his "weapon," during training near Kirkuk, Iraq, on June 14, 2010. Pentagon officials announced Friday, Jan. 16, 2015, that some 400 U.S. military trainers and an unspecified amount of support personnel will be heading to the Middle East to give basic infantry training to moderate Syrian rebels. (U.S. Army)

About 400 trainers and an unspecified number of support personnel will go to Saudi Arabia, Turkey and Qatar to conduct the training, which is expected to begin in early spring, according to Cmdr. Elissa Smith, a Pentagon spokeswoman.

“This number could fluctuate based on course load, course requirements and other variables,” Smith said in an emailed statement.

Defense officials did not identify which U.S. military units will be involved. But Kirby said that the deploying force will be a mix of special operators and conventional troops.

Col. Ed Thomas, a spokesman for chairman of the Joint Chiefs Gen. Martin Dempsey, said that the deployments will begin “soon” but the final dates have not been set.

Kirby said troops could receive deployment orders within the next week.

Sending trainers is part of a larger U.S. and international effort to combat the Islamic State terrorist group, which has taken over large chunks of Syria and Iraq. About 1,200 American troops are in Iraq training and advising Iraqi security forces and the Kurdish peshmerga as they prepare to conduct large-scale offensive operations against the Islamic State.

U.S. Central Command is conducting a bombing campaign in Syria and Iraq to degrade the Islamic State’s military capabilities. Coalition partners from the Middle East and Europe are participating in the air war.

Countries in the coalition have also pledged to send trainers to build up the moderate Syrian rebel force, according to defense officials. Kirby said that Saudi Arabia, Turkey, Qatar and two other nations have agreed to do so. Kirby would not identify the other two countries because they have not officially announced their plans.

Thomas said the number of U.S. troops that will be committed to the train and equip effort will depend on how many people international partners are willing to contribute.

Kirby said other members of the coalition couldcontribute “hundreds” of trainers, but the numbers are still being worked out.

The Pentagon hopes to train about 5,000 moderate Syrian rebels each year as the conflict evolves. The moderates are battling the Islamic State and other radical groups, as well as the Assad regime.

“The goal for the train and equip program is to build the capabilities of the moderate Syrian fighters to defend the Syrian people; stabilize areas under opposition control; promote the conditions for a negotiated settlement of the conflict in Syria; and empower trainees to go on the offensive” against the Islamic State, Smith said.

Kirby said trainees have not yet been recruited, but talks with Syrian rebel leaders are under way to identify potential recruits. Recruits have to be vetted before they are enrolled in the training program.

U.S. troops will provide force protection for trainers,to defend against insider attacks similar to those that have occurred in Afghanistan.

“We've learned the hard way … that's something we've got to be ever-vigilant on,” Kirby said.

Once recruits enter the training program, it will be “at least several months” before they are in a position to go back to the battlefield, Kirby said.

Questions remain about how effective the U.S.-trained fighters will be against well-resourced factions in Syria.