US to attempt first missile intercept test since 2008 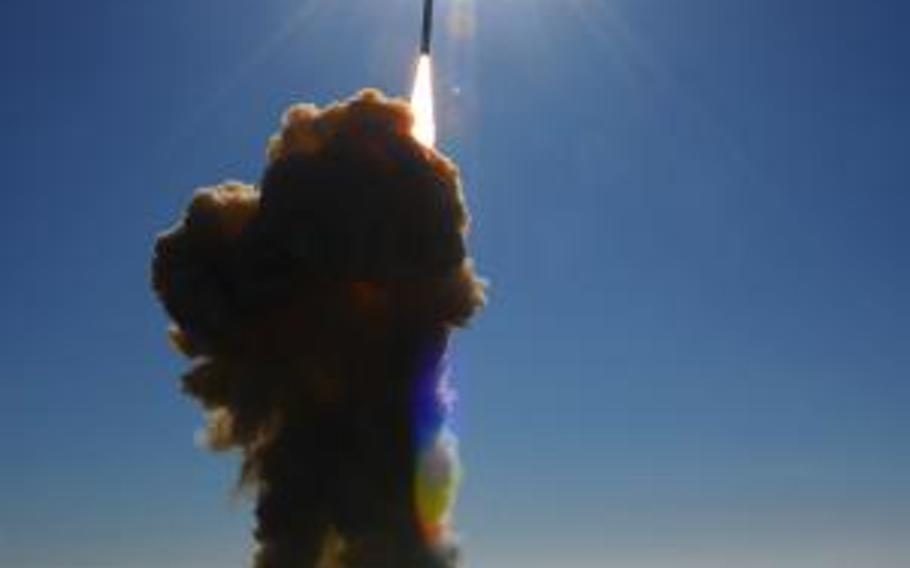 A ground-based interceptor lifts off from Vandenberg Air Force Base, Calif., in 2008. A weapon designed to blast nuclear missiles out of the sky failed to hit its target over the Pacific Ocean on July 5, 2013. (Jose Davila/DVIDS)

The Pentagon plans on July 5 to attempt the first successful interception in more than four years of a surrogate missile incoming toward the U.S.

The test is scheduled to use interceptors tipped with Raytheon Co. “hit-to-kill” warheads that last successfully hit their target during a December 2008 exercise, according to the Missile Defense Agency.

The $34 billion ground-based system of 30 interceptors in Alaska and California, operated by Boeing Co., has been in a testing hiatus after two failures in 2010 using a new, more sophisticated interceptor warhead. This week’s attempt won’t use the new warhead, which will be tested in a separate exercise later this year.

Because of the two 2010 failures “this test is the most significant demonstration of the ground-based interceptors and its fire-control system in the history of the program,” Ellison said. U.S. commanders “responsible for the defense of the United States will base their confidence and reliability on the result of this test.”

Cristina Chaplain, a director with the U.S. Government Accountability Office who oversees preparation of its annual missile defense report, said the test “will provide insights about the capability” of the existing CE-I warheads “against a complex target.”

“It’s important that the CE-I continue testing in light of the challenges being experienced with the second version of the kill vehicle” that’s still under evaluation, Chaplain said.

The December 2008 interception over the Pacific Ocean represented the eighth success in 15 tests since 1999 of the ground-based system using the initial warhead model, according to the agency.

An intercept test using the newer CE-II warhead is scheduled for later this year and, if successful, would trigger an expansion by 2017 of the current ground-based system to 44 from 30 interceptors.

The 14 added interceptors will be located in Alaska and will cost $1 billion, James Miller, undersecretary of defense for policy, told reporters in March.

After the 2010 failures, the agency discovered a flaw in the guidance system of the newest warhead. Pentagon officials, including the top tester Michael Gilmore, say that flaw has been corrected.