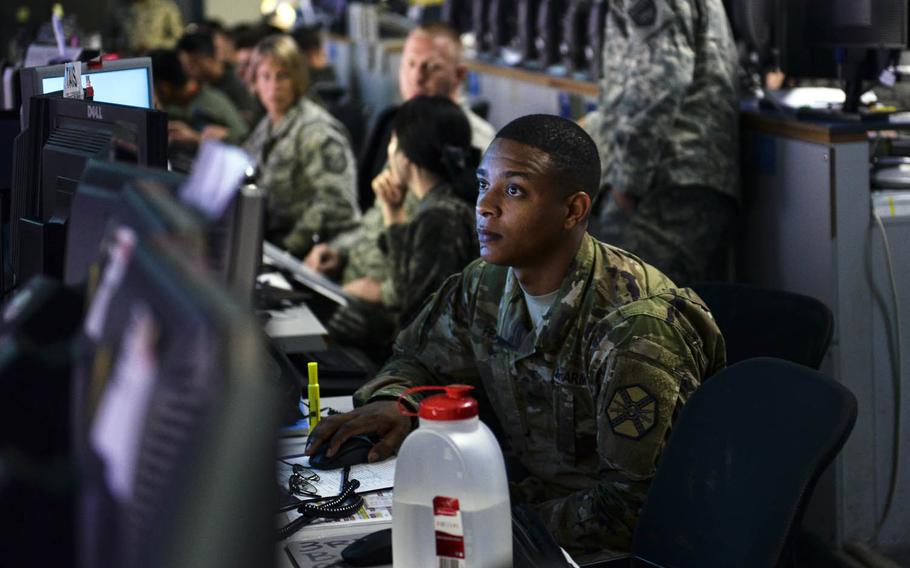 The mainly computerized annual exercise known as Ulchi Freedom Guardian comes as tensions have eased following a fierce standoff that saw North Korea threaten to fire missiles into the waters near Guam.

The simulations, which are carried out in bunkers and are designed to hone command decision-making and readiness, are to run through Aug. 31 and involve 17,500 U.S. servicemembers with approximately 3,000 coming from off the divided peninsula, officials said.

That’s fewer than last year, when 25,000 Americans participated, which analysts said could be an effort to tamp down tensions despite insistence by U.S. officials that the numbers weren’t linked to current events.

The communist state issued a fresh warning on Sunday, saying that Washington’s “reckless behavior” was “driving the situation into the uncontrollable phase of a nuclear war.”

South Korean President Moon Jae-in stressed the exercises were defensive in nature and warned Pyongyang not to use them as a pretext for provocations.

"The Ulchi exercise is aimed at checking on defense readiness aimed at protecting the lives and property of our people," Moon said Monday during a Cabinet meeting.

“North Korea needs to recognize that the fact that we have to conduct the U.S.-South Korean joint defensive exercises because of its repeated provocations is causing a vicious cycle,” he added.

Moon, who has been frustrated in his efforts to pursue a peaceful approach toward the North, also reiterated that the doors remain open for dialogue.

Some 50,000 South Korean soldiers are expected to participate in the exercise, according to the Yonhap News Agency. The South Korean side also will conduct a nationwide civil-defense drill on Wednesday.

As is usual practice, the U.N. Command Military Armistice Commission, which oversees the agreement that ended the 1950-53 Korean War, informed the North Korean army about the drills Monday via its mission in the truce village of Panmunjom, according to U.S. Forces Korea’s public affairs office.

Three U.S. military commanders – Adm. Harry Harris, head of the Pacific Command; Gen. John Hyten, head of the Strategic Command; and Lt. Gen. Samuel Greaves, director of the Missile Defense Agency – traveled to the peninsula and planned to observe the exercise this week.

This year’s drills are taking place under a looming threat by North Korea to fire missiles into the waters near Guam. President Donald Trump also warned he’ll unleash “fire and fury” on the communist state if it doesn’t curb its threatening behavior.

Defense Secretary Jim Mattis insisted Sunday that the reduced number of participants in Ulchi Freedom Guardian was not linked to current events, saying it reflected an emphasis on command post operations.

North Korean leader Kim Jong Un said last week that he’ll hold off on the Guam plan for now but would “watch a little more the foolish and stupid conduct of the Yankees.”

These also are the first major exercises since North Korea test-fired two intercontinental ballistic missiles last month, a major advance in its march toward developing a nuclear-tipped missile that could reach the U.S. mainland. China, North Korea’s economic lifeline and main ally, and Russia called for a suspension of the war games, but U.S. officials insisted the exercises are vital to maintaining readiness and are not on the negotiating table.

North Korea’s official ruling party organ, meanwhile, said in a commentary on Sunday that the drills were “throwing fuel onto fire” and reiterated Pyongyang’s claim that it has an ICBM “capable of striking the U.S. mainland from anywhere and anytime as it pleases.”

“Neither Guam not Hawaii nor the U.S. mainland can dodge the merciless strike of the Strategic Force of the Korean People’s Army,” Rodong Sinmun said. North Korea test-fired two ICBMs last month, but experts are divided over how close it is to being able to master the re-entry technology needed for them to seriously threaten the continental United States.

Ulchi Freedom Guardian, and another round of major exercises held in the spring known as Key Resolve/Foal Eagle, have been flashpoints for tensions in the past.

In 2015, the UFG exercises occurred after two South Korean soldiers were maimed Aug. 4 when they stepped on land mines in the heavily militarized border area that divides the peninsula. The two Koreas exchanged artillery and rocket fire, prompting the allies to take the unusual step of temporarily halting the exercise before reaching a deal to pull back from the brink of conflict.