US military spending up as global outlay hits 31-year high 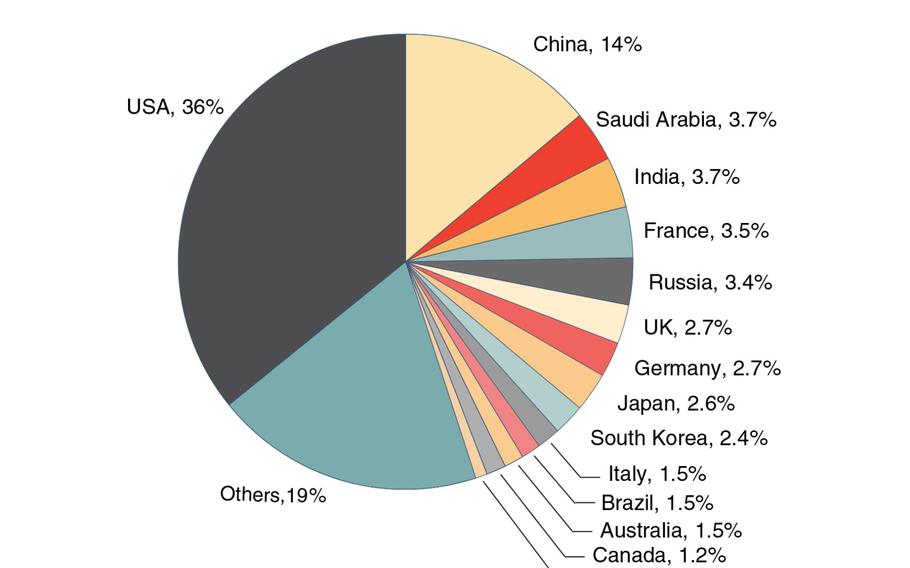 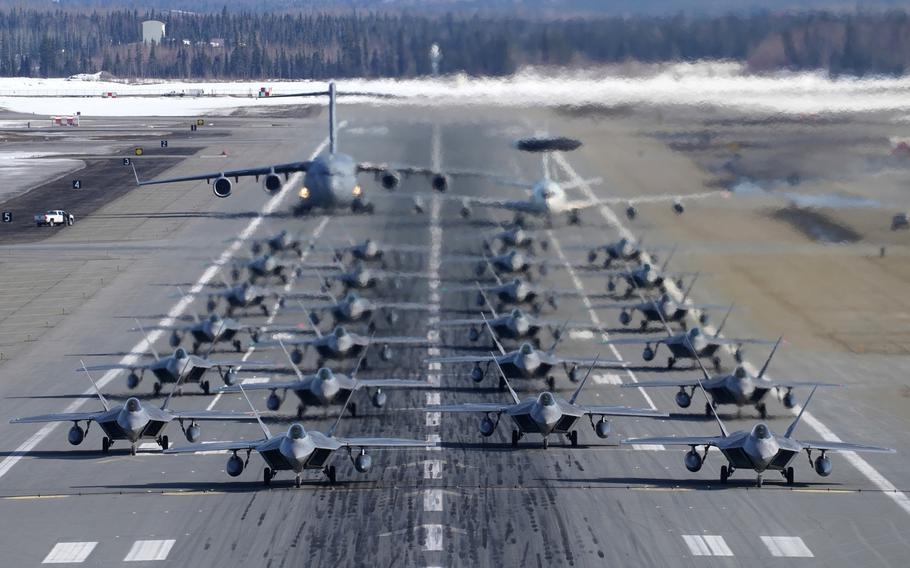 F-22 Raptors from the 3rd Wing and 477th Fighter Group participate in a close formation taxi with an E-3 Sentry and a C-17 Globemaster III, March 26, 2019, during a Polar Force exercise at Joint Base Elmendorf-Richardson, Alaska. The U.S. boosted military spending last year for the first time since 2010, with a 4.6% annual increase that added up to $649 billion. (Justin Connaher/U.S. Air Force)

STUTTGART, Germany — The U.S. boosted military spending last year for the first time since 2010 while Russia’s defense budget declined for the second year, according to a new report that found global military investment at a post-Cold War high.

Military spending increased overall to $1.8 trillion worldwide in 2018, a 2.6% increase that put expenditures at their highest level since 1988, the Stockholm International Peace Research Institute reported Monday.

The U.S. was by far the biggest spender with a 4.6% annual increase that added up to $649 billion — an amount nearly equal to the next eight largest defense budgets combined.

“The increase in U.S. spending was driven by the implementation from 2017 of new arms procurement programs under the Trump administration,” said Aude Fleurant, director of SIPRI’s military expenditure program.

China’s recent military advances and Russia’s assertiveness have prompted the U.S. to shift military focus away from the counterterrorism missions and insurgencies that have dominated the Pentagon’s attention in places such as Iraq and Afghanistan. Now, U.S. military strategy and investments are centered on “great power competition” and countering more sophisticated rivals.

In 2018, China was the second biggest spender at $250 billion, a 5% annual boost that marked Beijing’s 24th consecutive year of increased military expenditures. China’s expenditures now are nearly 10 times higher than in 1994, SIPRI said.

In 2018, the U.S. and China accounted for roughly half of global military spending.

Meanwhile, Moscow’s defense budget continued a recent downward trend after a decade focused on modernizing Russia’s aging post-Cold War military. At $61.4 billion, Russian military spending was the sixth highest in the world in 2018, but overall spending decreased by 3.5% compared to 2017, SIPRI reported.

Still, concerns about a more militarily aggressive Russia have prompted several European countries to ramp up their spending. Poland spent $11.6 billion in 2018, an 8.9% increase. Ukraine’s spending rose by 21% to $4.8 billion while Bulgaria, Latvia, Lithuania and Romania also posted gains between 18 and 24%, SIPRI reported.

“The increases in Central and Eastern Europe are largely due to growing perceptions of a threat from Russia,” said Pieter Wezeman, a SIPRI senior researcher.

Turkey’s $19 billion was a 24% increase, the largest gain among the world’s top 15 military spenders, SIPRI said.

Meanwhile, the largest decrease in military expenditures came from Saudi Arabia, which dropped $4.6 billion. Still, Saudi Arabia spends more than any other country on defense as a share of economic output at 8.8% of gross domestic product.

SIPRI’s numbers differ from the Defense Department’s own budget numbers, which added up to about $700 billion for the 2018 fiscal year.