Up to 15,000 National Guard troops could activate to help law enforcement during Biden inauguration 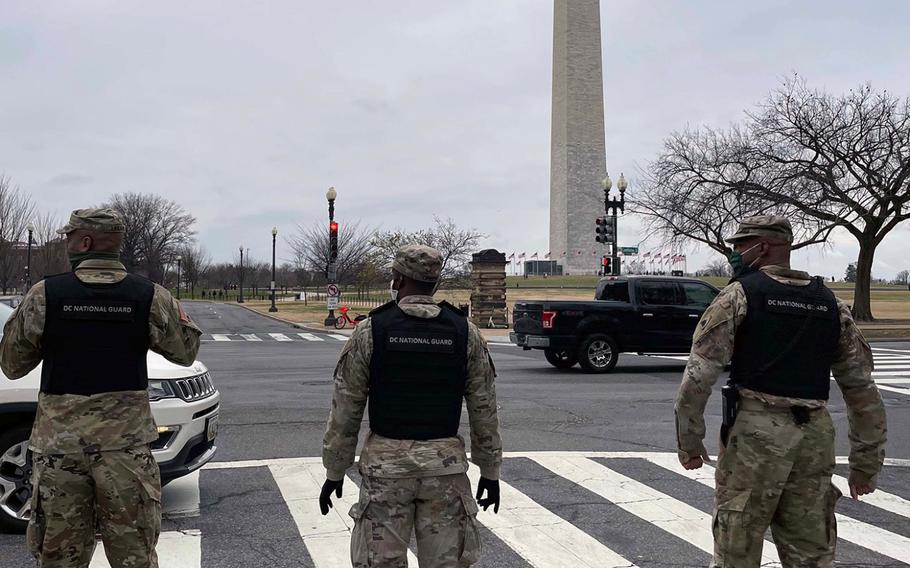 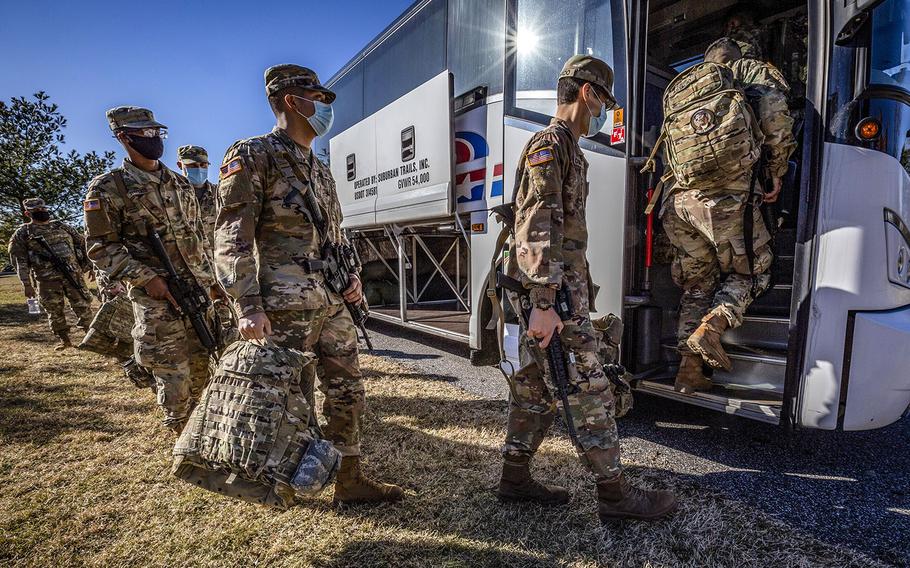 In a Jan. 9, 2021 photo, soldiers with Company C, 1-114th Infantry Regiment, New Jersey Army National Guard, load their backpacks on to a bus at the National Guard Armory at Blackwood, N.J. They were among nearly 500 soldiers deploying to Washington, D.C. to support the District of Columbia National Guard and local law enforcement. (Mark C. Olsen/New Jersey National Guard)

Some 15,000 National Guard troops could be deployed to bolster law enforcement efforts during President-elect Joe Biden’s inauguration, amid concerns of violence after a mob stormed the U.S. Capitol last week, the National Guard chief said Monday.

The National Guard deployment in Washington this week will increase from roughly 6,200 troops from D.C. and six states to about 10,000 troops by the weekend, said Army Gen. Daniel Hokanson, the chief of the National Guard Bureau. The Pentagon has authorized that deployment to grow up to 15,000 troops, depending on the requests of federal law enforcement, including the Secret Service, the Capitol Police and the U.S. Park Police, Hokanson told reporters Monday.

Those troops are expected to “support security, logistics, liaison and communications missions,” the general said. No decisions have been made about whether some or all troops will be allowed to carry firearms or nonlethal weapons.

As the deadly siege of the U.S. Capitol by supporters of President Donald Trump unfolded Wednesday, the Pentagon authorized the deployment of the entire 1,100-troop D.C. National Guard. Another about 5,100 troops from Pennsylvania, Virginia, Maryland, Delaware, New Jersey and New York have since arrived in Washington to help bolster security, among other tasks, Hokanson said. He did not disclose from which states additional troops would deploy.

Nearly all of the Guard troops who have already deployed to Washington were already scheduled to be sent to the city for the inauguration, even before last week’s riot, officials said. Their deployments were hastened as law enforcement officials were concerned about the potential for new violence in the days leading up to the inauguration. More protests, including by Trump’s supporters proclaiming election fraud, were expected in Washington during the weekend.

The troops who have deployed to Washington are not carrying weapons nor are they wearing protective body armor. Hokanson said the Pentagon and law enforcement officials meet daily to discuss potential threats. Army Secretary Ryan McCarthy said last week that officials were considering arming at least some National Guard troops.

Those who have deployed from outside of Washington brought their service weapons and protective equipment with them, Hokanson said. If officials deem it necessary to arm any of them, they will quickly have access to that gear.

“With respect to arming [National Guard troops], obviously, we will work very closely with the federal agencies, the FBI and law enforcement to determine if there is a need for that,” he said. “Obviously, we're very concerned. Our individuals ... have the right to self-defense, and so that will be an ongoing conversation.”

Lawmakers and others have been critical of the security response to the siege that saw some supporters of Trump march on the Capitol after he spoke to them at a rally outside the White House. Some of them attacked police and broke into the building where Congress was in session. The riots delayed Congress from the official certification of Biden’s Electoral College victory, but lawmakers hours later approved the election results. Five people, including a Capitol Police officer, were killed during the clash.

Pentagon officials have said only 340 National Guard troops were deployed before the attack because that is what Washington city officials had requested.

Hokanson said Monday that National Guard troops from outside of the city could not have deployed any faster. Guard officials last week said units need at least 12 hours or so to deploy in most situations.

Deploying National Guard for security purposes in the United States, Hokanson said, should only be done as “a last resort.”