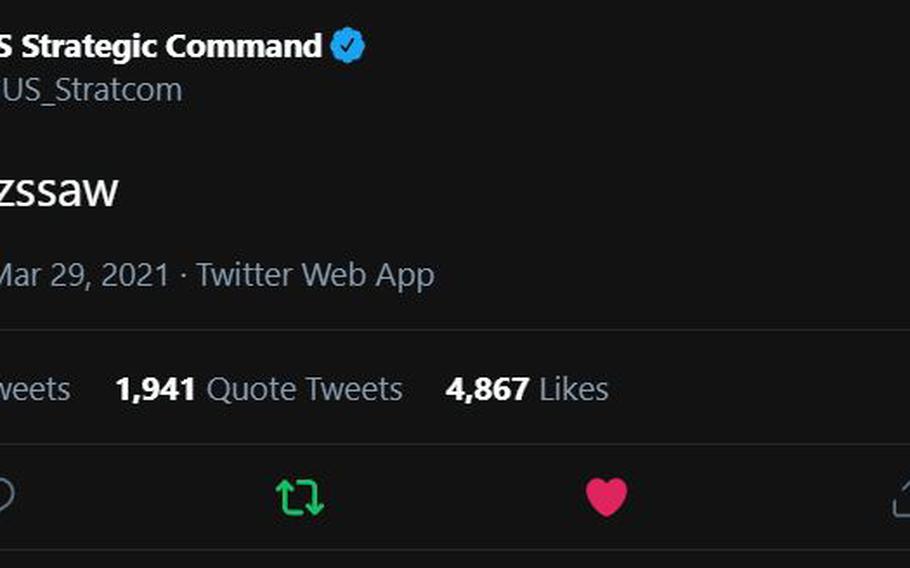 Did a military mascot gain control of the U.S. Strategic Command Twitter account or has someone inadvertently released the launch code for a nuclear weapon?

These were among the questions asked by commenters after the command, at 8:48 a.m. Monday, tweeted the sequence “;l;;gmlxzssaw.”

The unusual message received more than 12,000 likes, 9,000 retweets and hundreds of comments less than an hour after it was posted.

“Apologizes for any confusion. Please disregard this post,” the command, at Offutt Air Force Base, Neb., tweeted in vain after the original message.

Strategic Command is responsible for U.S. nuclear forces that can deliver nuclear arms from land- and sea-based missiles and from aircraft.

One person on Twitter speculated that the message was some kind of “strategy” and someone else asked: “Should we all be taking cover?” Soon more people weighed in with theories on the origin and meaning of “;l;;gmlxzssaw.”

Was it the mascot?

Not worthy of Van Halen