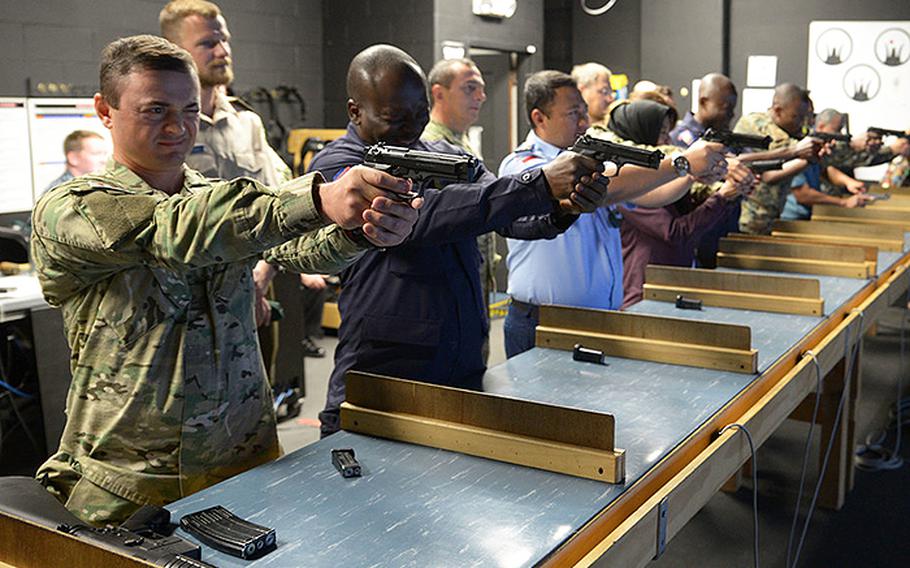 WASHINGTON – Two Republican senators introduced legislation Thursday that would restrict foreign military students from obtaining firearms and establish a more thorough vetting process for the students before they are allowed access to U.S. military bases.

The Secure U.S. Bases Act aims to improve security following a deadly shooting Dec. 6 at Naval Air Station Pensacola, Fla., where a Saudi officer who was training on the base killed three U.S. sailors and injured eight other people. The bill was introduced by Sens. Joni Ernst, R-Iowa, and Rick Scott, R-Fla., who heard from Pentagon officials this week about security weaknesses that led to the Pensacola attack.

Garry Reid, director for defense intelligence, told senators Wednesday that Pentagon procedures meant to detect and prevent threats at U.S. military bases did not cover international military students. Further, the Pentagon is “overly reliant” on the State Department’s vetting procedures for these students and the agencies fail to share information, he said. There are also loopholes that allow foreign military students to purchase firearms, despite restrictions for non-immigrant visa holders.

“The tragic events at Pensacola underscore the unacceptable shortfalls in our security standards and vetting procedures,” Ernst said in a statement. “We must do more to protect our military personnel and ensure the security of our facilities.”

The Secure U.S. Bases Act would create a new visa category for foreign military students that would prohibit them from possessing or acquiring a firearm except for specific use in their training programs. The shooter in the Pensacola attack, Mohammed Alshamrani, a second lieutenant in the Royal Saudi Air Force, was able to buy a semi-automatic handgun with a hunting license.

The bill would also require members of foreign militaries to get an official endorsement letter from the chief of intelligence of their countries when applying for U.S. military training. Students would also have to be fingerprinted and undergo an in-person interview and extensive background check that would include a review of their social media activity. The U.S. director of national intelligence would have to make the final decision on whether to admit students into the program.

Questions about the thoroughness of the vetting process came into question during the investigation of the Pensacola shooting, which was deemed an act of terrorism. Alshamrani was motivated by “jihadist ideology” and had posted anti-American messages on social media, Attorney General William Barr said.

During the FBI’s investigation into the attack, 21 Saudi students were expelled from the United States for having “derogatory material” on their computers and phones, Barr said.

Lastly, the Secure U.S. Bases Act would order the defense secretary to develop risk profiles for each country that participates in the training program. Those risk profiles would be used when deciding whether or not to admit students.

At the direction of Defense Secretary Mark Esper, Reid’s office produced a 12-page report about security involving foreign military students and made six recommendations to address 21 findings. However, the full report is classified. To discuss its details, Ernst, Scott and other members of the Senate Armed Services Committee went into a session Wednesday that was closed to the public.